Pro-LGBT rights activists hoist the rainbow colors of the LGBT "Pride" movement outside rabbi's bureau in protest of disparaging remarks he made against the community. 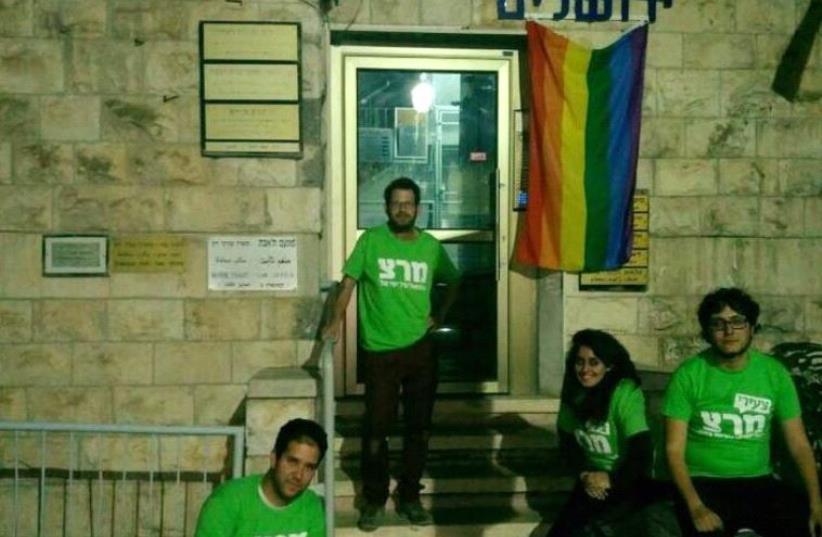 Meretz activists hoist the LGBT Pride flag outside the office of Chief Jerusalem Rabbi Shlomo Amar after he made disparaging remarks about the community
(photo credit: MERETZ)
Advertisement
Activists hoisted the LGBT movement’s rainbow flag outside the Jerusalem Sephardi chief rabbi’s office Saturday night after the rabbi’s derogatory comments on gay people over the weekend.Meretz posted a photograph Sunday morning of its activists at the scene, which also included a chalk drawing of the LGBT colors on the sidewalk outside of Rabbi Shlomo Amar’s office.“A group of Meretz activists from the Hebrew University have adorned Rabbi Amar’s bureau in Jerusalem tonight with the pride flag,” read a message accompanying the photograph on the official Meretz Twitter page. The post added a message that the activists wished to relay to the rabbi, reading: “May you have a week of love, pride and full of acceptance of the other.”
Religious assailant stabs six at Jerusalem Gay Pride march
In an interview with Israel Hayom published Friday, Amar called men and women from the LGBT community “a cult of abomination” and said they are liable to the death penalty according to Jewish law.Amar’s comments created a fierce political backlash from members of the Knesset and the Jerusalem City Council who helped get the rabbi, who was Sephardi chief rabbi of Israel from 2003 to 2013, elected to his current post.As Amar’s comments circulated Thursday in a preview of the article, at least two complaints of incitement were filed against him to police.In the interview, Amar said he related to Reform Jews through the prism of the biblical injunction against Korah and his followers in Numbers 16 to “turn away from the tents of evil people.”Asked about his attitude toward the LGBT community, the rabbi said: “This is a cult of abomination, this is clear. This is an abomination. The Torah requires a death sentence for this. This is in the first row of the most severe transgressions.”Amar also rejected the notion that someone may have a homosexual inclination, calling it “nonsense” and arguing instead that “there are desires and a person can overcome it if he wants, like all other desires.”Following the publication of Amar’s comments, several politicians spoke out against him, including MKs Yael German (Yesh Atid) and Merav Michaeli (Zionist Union), who wrote to Religious Services Minister David Azoulay of Shas and Prime Minister Benjamin Netanyahu calling on them to fire Amar.The MKs wrote in their letter that Amar was “exploiting his position” as a public figure and opinion leader “for a campaign of dangerous incitement against a large public group in Israel,” adding that “a public figure who endangers the safety of Israeli citizens by discrimination and incitement should be fired from their position immediately.”On Sunday morning, the country’s largest-selling haredi (ultra-Orthodox) daily Yated Ne’eman publicly backed Amar and said he was merely quoting the Torah, while strongly attacking the media for creating headlines against “G-dly institutions.”“A group of ignoramuses who have never read or studied [Torah], lacking any basic understanding of the eternal Jewish Torah, hear some comment of a haredi speaker, whether an honorable rabbi or public figure, when he attacks one or another of the secular subcultures and presents the Torah perspective on it, and then at a time when there are no more engaging headlines, this comment is turned into a ‘storm’ or ‘outrage,’” Yated Ne’eman wrote in its Sunday editorial.On Sunday, representatives of the Yerushalmim movement and its political party in the Jerusalem City Council demonstrated outside the offices of the Jerusalem Rabbinate, together with other activists from the city.There were counter-protesters from United Jerusalem “to defend the honor of the Torah and the honor of the rabbi,” in the words of Aryeh King, a United Jerusalem representative on the City Council.He said the liberal activists protesting Amar’s comments were hypocrites for not demonstrating against intolerant comments he said Muslim and Christian clerics have made about minorities and Jews.“Then and only then will we not oppose to a leftist demonstration against a rabbi who ‘sinned’ by citing Jewish law and the holy Torah,” King wrote on Facebook.Jeremy Sharon contributed to this report.