Is Israel's success against terror a model for the US Army against ISIS?

The success in pinpointing and stopping "lone wolf terrorists" will be a major issue brought up in IDF chief's upcoming visit to the United States. 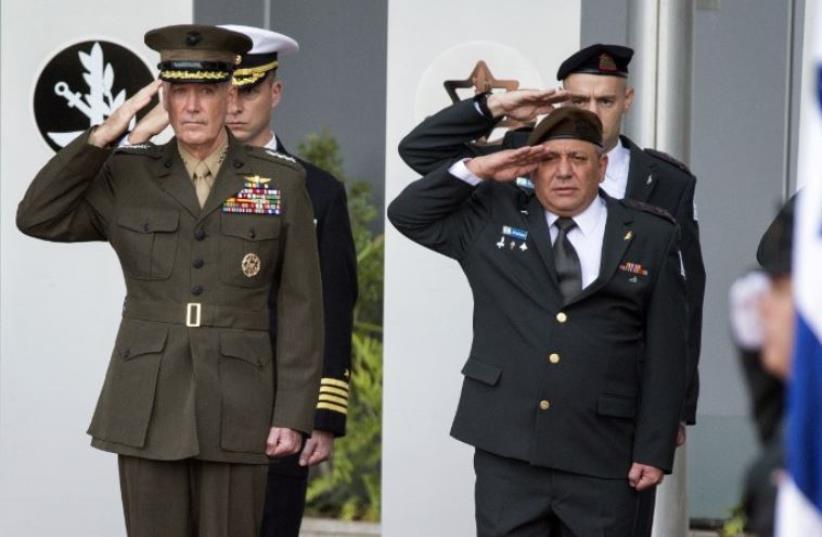 IDF chief of staff Gadi Eizenkot (R) and US Chairman of the Joint Chiefs of Staff, General Joseph F. Dunford (L), salute their national anthems during an official ceremony in Tel Aviv
(photo credit: AFP PHOTO)
Advertisement
The number of terrorist attacks in Israel last month was one of the lowest in 10 months. There were six attacks in July, according to the IDF, a drastic fall from the 70 seen last October.Since the current wave of terrorism began, 41 Israelis and foreigners and about 250 Palestinians have died.A senior IDF officer told The Jerusalem Post on Tuesday that the July number shows that recent tactics used by the security system are working.These include a combination of precise intelligence from the Shin Bet (Israeli Security Agency) with daily and nightly IDF operations to distinguish terrorists from the rest of the population in the West Bank. The operations allow the majority of Palestinians, including 100,000 holders of Israeli work permits, to continue with their day to day routines.The success in pinpointing and stopping terrorism, most of which has come from “lonewolf” attackers, will be a major issue brought up by IDF Chief of Staff Lt.-Gen. Gadi Eisenkot during his visit this week to the United States. Eisenkot is a guest of Gen. Joseph F. Dunford, chairman of the US Joint Chiefs of Staff. This is the third meeting between the two since Eisenkot entered his position a year and a half ago. Dunford has been a guest of the IDF in Israel twice.The US military is interested in the strategy used by the IDF known in Hebrew as “military campaigns between wars.” The Israeli army has been involved for nearly a decade in consistent, systematic, clandestine operations against terrorist efforts to smuggle weapons far from Israeli borders. These intelligence-based operations are directed against weapons smuggling from Iran, Sudan and Libya, to Hezbollah in Lebanon and to terrorist groups in Gaza.The American military hosts are also interested in discussing with Eisenkot the possibility of adopting similar strategies against ISIS in Iraq, Syria and Libya.“To some extent we have become a laboratory that not only the United States Army wants to learn from, but also from other Western armies,” the IDF officer said. He also noted that interest has been expressed by German, French and Canadian Chiefs of Staff and their senior officers.Dunford and his aides are also said to be seeking talks with Eisenkot about IDF implantation of its multi-year plan that set a fixed budget and succeeded in reducing man power.That plan has also directed the closing of unnecessary units and the establishment of ones better able to adjust to new and changing dangers in the Middle East.