'This is one of the first, if not the first, cases of manmade pollution on the planet' said Professor Barkai, lead researcher at Tel Aviv University. 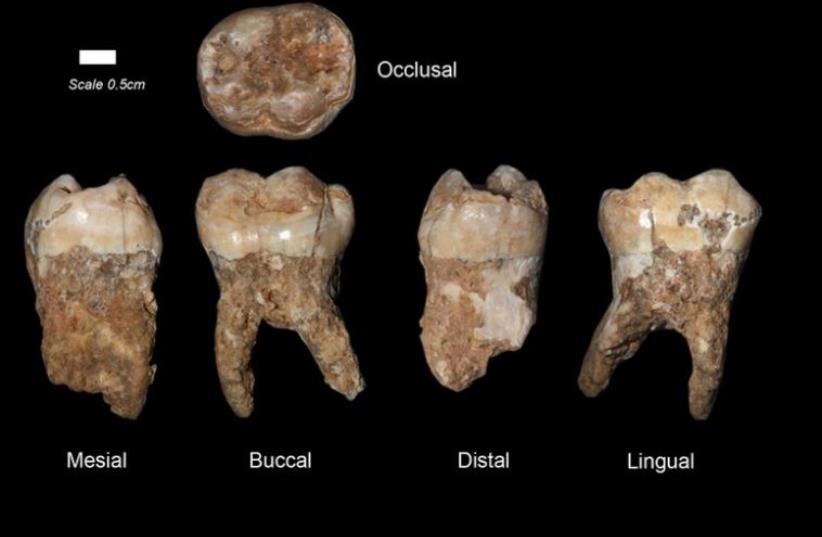 Researchers at Tel Aviv University discover 400,000 year old teeth
(photo credit: TEL AVIV UNIVERSITY)
Advertisement
Researchers in Tel Aviv University, in collaboration with scholars from Spain, the UK and Australia, have uncovered 400,000 year old fossilized teeth at Qesem Cave near Tel Aviv. The cave has been the site of many major discoveries from the late Lower Paleolithic period. Notably, these human artifacts provide evidence of food and potential respiratory irritants, and give insight into what early Palaeolithic people ate and the quality of the air they breathed inside Qesem Cave. "Human teeth of this age have never been studied before for dental calculus, and we had very low expectations because of the age of the plaque," said Professor Avi Gopher, Proffessor within the Department of Archaeology and Ancient Near Eastern Civilizations, and one of the researchers working on this discovery.  "However, our international collaborators, using a combination of methods, found many materials entrapped within the calculus. Because the cave was sealed for 200,000 years, everything, including the teeth and its calculus, were preserved exceedingly well."Researchers believe that possible respiratory irritants, including traces of charcoal found in the dental calculus, may have been caused by inahling smoke from indoor fires used for roasting meat. This disovery comes as one of the earliest direct evidence for inhaled environmental pollution, and may have had negative effects on the health of those within the Paleolithic period."This is one of the first, if not the first, cases of manmade pollution on the planet" said Professor Barkai, one of the lead researchers from Tel Aviv University's Archeology department.These teeth also provide significant insight of what the diet of these early humans may have been. Researchers discovered small traces of essential fatty acids which may have been from nuts, seeds and other plant based sources. "We know that the cave dwellers ate animals, and exploited them entirely," Professor Barkai explained. "We know that they hunted them, butchered them, roasted them, broke their bones to extract their marrow, and even used the butchered bones as hammers to shape flint tools. Now we have direct evidence of a tiny piece of the plant-based part of their diet also, in addition to the animal meat and fat they consumed." "Our findings are rare. There is no other similar discovery from this time period," said Professor Barkai. "The charcoal and starch findings give us a more comprehensive idea of how these people lived their lives; and this broader view came directly from their teeth."