The proposal includes tax benefits, municipal-tax discounts and various aid programs during the years 2017 and 2018. 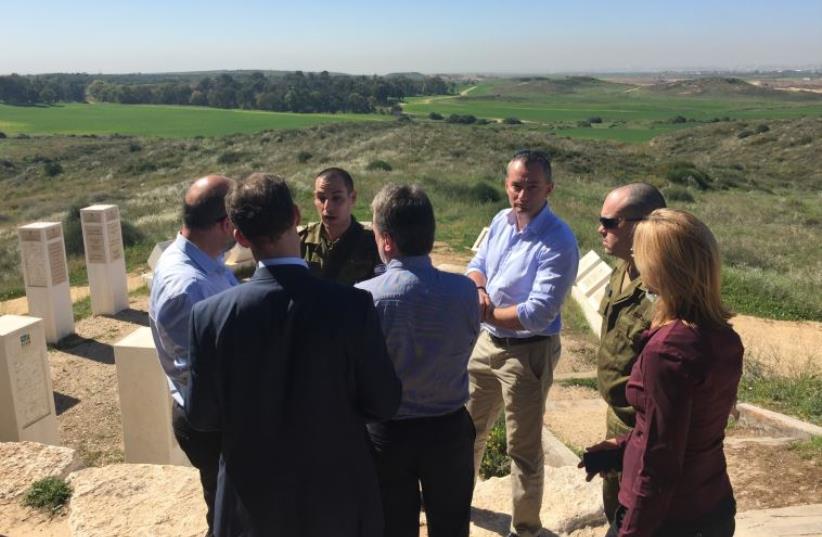 Mladenov with IDF officers overlooking Sderot and Gaza.
(photo credit: UNSCO PHOTO BANK)
Advertisement
The cabinet approved a joint proposal by the Finance Ministry and Prime Minister’s Office on Sunday aimed at economically and socially strengthening the population of the Gaza “envelope” communities.The proposal includes tax benefits, municipal-tax discounts and various aid programs during the years 2017 and 2018.Prime Minister Benjamin Netanyahu opened Sunday’s weekly cabinet meeting by saying: “The government will approve a plan to strengthen the residents of Sderot and the Gaza envelope region today.By approving this plan, we are telling to the residents that ‘We will continue to strengthen you, we will continue to strengthen the area, we will continue to strengthen the Negev. We are doing this for you, for the Negev and for the security and future of the State of Israel.’” Finance Minister Moshe Kahlon said during the meeting: “Strengthening the fortitude of the Gaza envelope towns is strengthening the national fortitude of the State of Israel.”According to the Finance Ministry, the proposal, which was titled “Strengthening the civilian fortitude in Sderot and the Gaza envelope communities,” allocates a budget of NIS 536 million for the next two years to the city of Sderot and the regional councils of Eshkol, Ashkelon Coast, Sdot Negev and Sha’ar Hanegev.The proposal Kahlon and Netanyahu presented to the cabinet centers on aiding the residents and the municipalities with paying for the high expenses that stem from the security situation near the Gaza Strip.The measures include a 20% income-tax refund for residents of the eligible communities, a 45% municipal property-tax (arnona) discount, subsidies for daycare centers, NIS 93m. in direct financial aid to Sderot and the regional councils and more than NIS 65m. for the development of municipal infrastructures such as sewage and roads.In addition, five so-called fortitude centers will be built in the region. The fortitude centers will provide psychological and social services for locals who were afflicted with trauma and anxiety as a result of the rocket attacks. These centers are also meant to reinforce the existing emergency medical services and mental-health centers in Sderot and the regional councils.Prime Minister’s Office director- general Eli Groner said he developed the proposal in partnership with the Finance Ministry and with the cooperation of various other ministries, including Defense, Education, Health and Economy.