“The news is that there will be war this coming night," Elazar told Air Force Commander Major General Benny Peled, according to a diary entry. "This information must be treated with credibility." 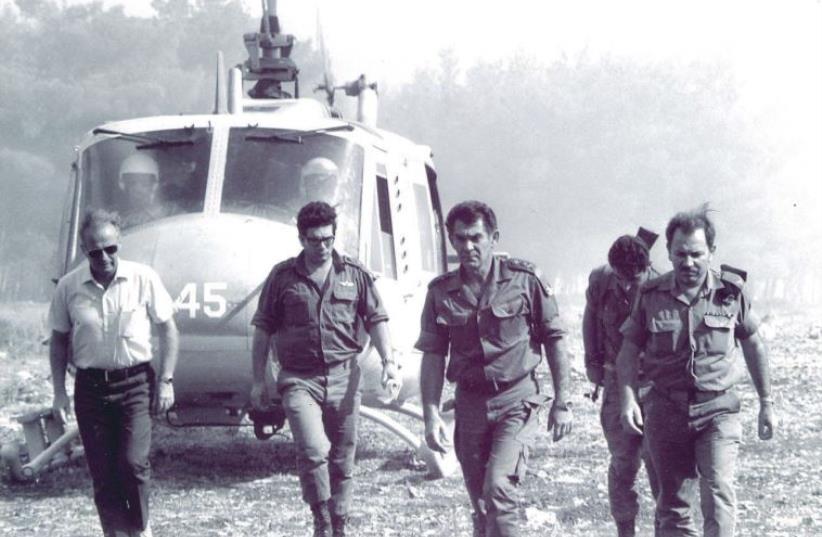 LT-Gen. David Elazar (center) alights from a helicopter to visit the troops on the Golan Heights. In the white shirt (left) is Yitzhak Rabin, serving as an informal advisor
(photo credit: JERUSALEM POST ARCHIVE)
Advertisement
Excerpts of the diary of IDF Chief of Staff David "Dado" Elazar, who served during the Yom Kippur War in 1973 and was forced to resign shortly after, have been released by the IDF archives, according to Maariv. The parts released begin with the day the Yom Kippur War broke out, detailing the dramatic discussions which occurred in preparation for the war.“The news is that there will be war this coming night," Elazar told Air Force Commander Major General Benny Peled, according to the diary entry at 4:30 on October 6, 1973. "This information must be treated with credibility."An hour later, Director of Intelligence Major General Eli Zeira stated, "There are military signs, moves and information, which must be taken seriously." "The Israeli Operations Directorate may permit the calling up of the most necessary reserves for work needed by the various branches [of the military] to finish preparations," Elazar ordered at the end of the meeting. "On the order of up to 1000s of people [may be called up]."After a meeting with various branches of the military at 7:15, the Chief of Staff stated, "in light of this information, there is a heightened severity. Therefore, I assume that this evening at 6:00 p.m., they're going to start..."In the same entry, Elazar wrote that Defense Minister Moshe Dayan "at this point is opposed to a preventive strike," adding that "If you don't permit a preventive strike at noon, we will be on call for an immediate alert this afternoon.""I am aware of the great political limitation of this matter, but when we are sure there is going to be war, how to succeed the fastest and best way is important," Elazar warned. He later detailed the evacuation process for civilians in the entry, "Golan Heights - evacuate woman and children by this evening, a large trip to the center of the country, which some man will accompany...Sinai - get out the woman and children from Abu Rudeis by air transport."At a meeting of high ranking officials at 10:00 a.m., Elazar said, "At noon, I will tell the commanders how to conduct the nocturnal war. I want to be free to plan the war on Sunday, Monday and Tuesday, and for this I need your data."It becomes apparent through the diary that Elazar believed the war would begin in the evening, although it actually began with the attack by Egypt and Syria at 2 p.m.At a meeting with Dayan at 11:00 a.m., Dayan asked, "In terms of the calling up of reserves, what will be if they don't start firing, when will we release the reserves back home?" Elazar answered, "If the matter isn't pushed off for a day or two, but instead is cancelled, then we'll send the reserves home.""Sadat will say that it's not worth a second time, because Sadat is building a little on surprise and a little on the fact that it's Yom Kippur, and he's already said no 50 times," Dayan said. "Therefore, it could be that he'll decide to drop it."“I want to remind everyone, that the first goal is to destroy the forces…anyone who attacks us, kill him. This is important,” Dayan continued.“For the big attack of crossing the [Suez] Canal, we will need a few days. The number of days depends on the extent to which we went wrong on the line of defense,” Elazar explained concerning plans to cross the Suez Canal.“They have a plan to disrupt our gas,” Dayan stated in connection to the plans. “Concerning the gas, this is an Arab and Israeli issue…”“In this war, we will see the difficult hours tonight and tomorrow if they start firing, they are the attackers and we are the defenders,” Elazar said, summarizing the meeting. “This is a situation that we aren’t used to, but we will see how we will stand in it.”At 12:20 a.m., an hour and a half before the war broke out, Elazar held a meeting with Shmuel Gonen, the Commander of the Southern Command. Gonen opened the meeting by saying that the United Nations had notified them that the Egyptians were going to start firing immediately. Elazar received a report afterwards about the situation in the field and on details of a plan.A day before the war, Deputy Chief of Staff General Israel Tal gave orders for the organization of widespread recruitment, “In large cities, the preparation consists of the police and military with cars with loudspeakers. The IDF will ensure that Army Radio is ready…to supervise everything.”The day after, a few hours before war broke out, Tal began recruiting reserves. The air force notified that thy need 15-18 thousand men recruited. Tal notified the air force that he would demand everything that was needed, saying, “The Operations Branch was given instructions not to hold back.”At 2 p.m., the Yom Kippur War broke out with a joint attack by Egypt and Syria on IDF forces in the Sinai Desert and Golan Heights. By the time the war ended at the end of October, about three weeks after it started, over 2,500 Israelis had been killed and thousands more were injured. Elazar resigned after being recommended for dismissal by a commission which investigated the government and military's actions during the war. Multiple other military officials resigned or were recommended for dismissal as well. After a large public uproar blamed Golda Meir and Moshe Dayan for the severe losses, both leaders resigned in April, 1974.