Boy George: I knew I'd come back to Israel

Ahead of November concert, the British pop sensation says the online pressure to cancel doesn't faze him. 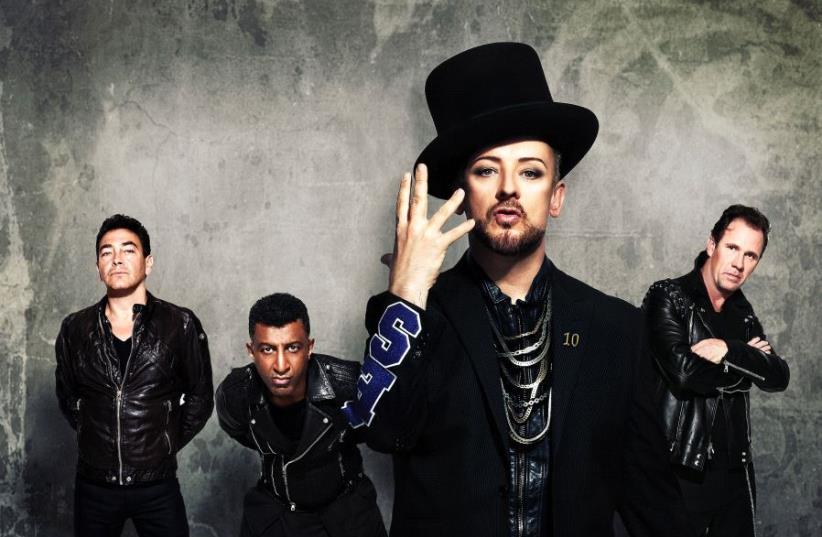 Pop legend Boy George and his band are expected to arrive for their Israel concert in November 2017.
(photo credit: PR)
Advertisement
Boy George is just being true to himself. The iconic British pop singer is excited to return to Israel for his upcoming concert with his band, Culture Club, and doesn't seem to bat his impressive eyelashes at BDS pressure not to perform. "We have to be really careful with the Internet because people say everyone is talking - it's like five people, they're retweeting each other," he told Israel's Channel 2 News in an interview this week, "and that doesn't constitute a revolution."
Culture Club - Karma Chameleon (YouTube/CultureClubVEVO)
George told Ynet that he "got a wonderful reception in Israel, so it was clear to me I'd be back. As an artist you respond to warmth." The singer, responsible for hits like "Do You Really Want to Hurt Me," "Karma Chameleon" and "Time (Clock of the Heart)," will be taking the stage on November 7 at Heichal Hamenora in Tel Aviv. And despite the best attempts by anti-Israeli activists to draw him into the heart of a political storm - he isn't interested. "Boy George is about something really positive and something alternative and I want to play to my fans wherever they are," he told Channel 2. "Sometimes being true to who you are is the most political thing you can ever do." The singer told Ynet that while he gets a "few tweets" against him every time he comes to Israel, "I think our message today is more important than any other time - people in Israel need to see me." George was most recently in Israel in 2014, when he took part in the opening events of Gay Pride Week in Eilat. He also played in Israel in 2010, and performed with the Culture Club in 1985. His performance next month is part of a reunion tour with the Culture Club, his iconic '80s band.