Dining: A Brazilian feast with a Jerusalem twist

The Inbal Grill is the perfect setting for a family celebration or a romantic night out. 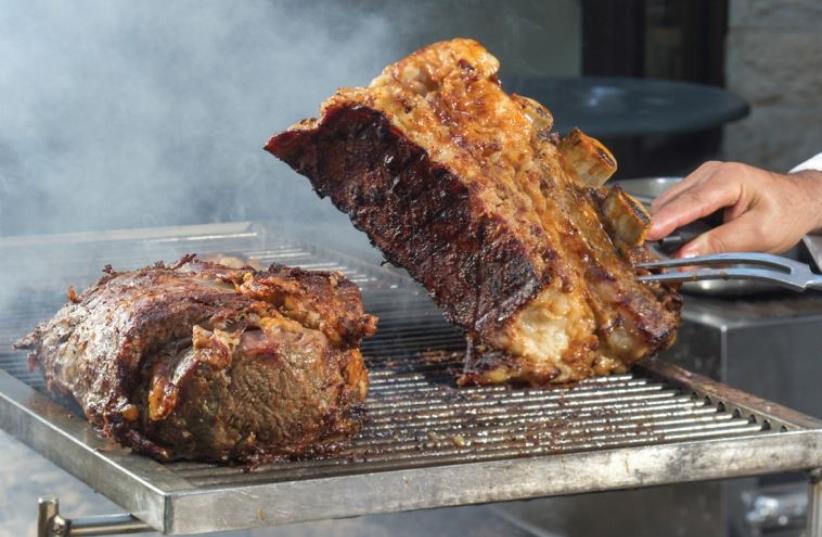 The Inbal Grill
(photo credit: PR)
Advertisement
The Inbal Hotel has once again opened its summer restaurant, The Inbal Grill, but this year under the direction of its new executive chef, Nir Elkayam. Formerly executive chef at the Carlton Hotel in Tel Aviv, he joined the Inbal last year.The setting of the restaurant in the enclosed courtyard of the hotel is idyllic, and it was surprisingly mild even though it was a particularly cold evening.The atmosphere was enhanced by the gentle tones from a live jazz trio.In keeping with a traditional Brazilian style grill, there is a simple set menu, which includes unlimited salads, meats, side dishes and fruit dessert (NIS 190; NIS 95 for children under 12).Drinks are extra.We started the meal with a wonderful array of eight salads and focaccia. The salads were all delicious, but the standouts were the grilled mushroom salad, the sautéed cauliflower salad and the sweet potato with pesto salad.The salads, which remained on the table throughout the main course, were joined by a tasty selection of grilled vegetables and the chef’s Belgian style potato wedges. The wedges are double fried and seasoned with his secret mix of spices. The result is dangerously good, and we had to force ourselves to remember all the meat that was still to come.The chef explained that they normally start with the lighter meats and work their way up to the heavy ones. Both the chicken breast and the spring chicken were succulent and flavorful, and we enjoyed adding a touch of the chef’s salsa. The lamb kebab was juicy and pretty much as expected.Next came the deboned beef spare ribs marinated in a barbecue sauce that gave the meat a subtle sweetness. The highlight of the meal was the entrecote, which was carved table-side. Those who preferred well-done meat chose the first few slices, while I waited until the chef hit the central pink pieces. As the chef himself said, a good piece of meat needs very little seasoning, and we enjoyed the simplicity of the dish.Although you can ask for more of any of the meat dishes, we were more than happy with what we had tried. For dessert, we enjoyed a plate of fresh watermelon with tea and coffee.We accompanied our meal with a bottle of Segal’s single vineyard Cabernet Sauvignon – Dishon 2012 (NIS 159), which went perfectly with both the chicken and the beef dishes.The restaurant is open until the end of September and is the perfect setting for a family celebration. The hotel provides free parking in the hotel’s parking lot for up to two hours for guests dining at The Inbal Grill (upon availability).The writer was a guest of the restaurant.The Inbal Grill
Kosher
Inbal Hotel 3 Jabotinsky Street, Jerusalem
Tel: (02) 675-6692/6689
Sunday to Thursday, 6:30 p.m. to 10 p.m.