Eurovision exec: Madonna has not signed a contract 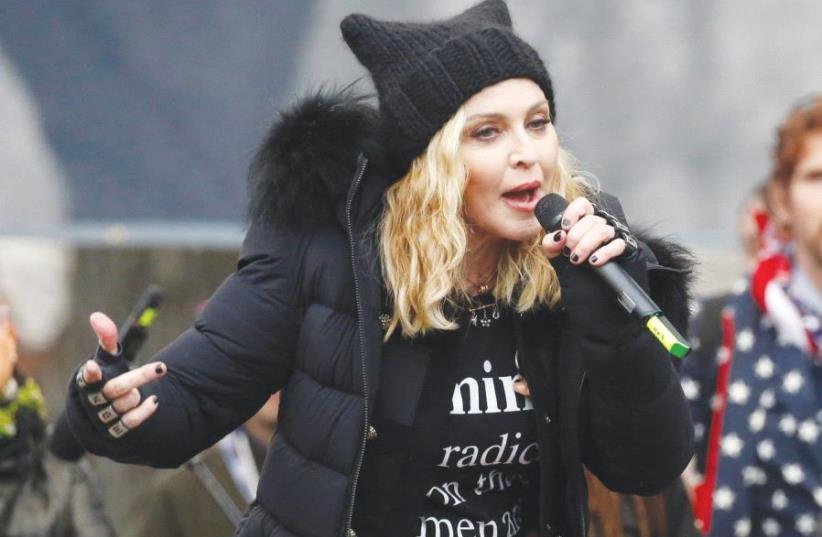 MADONNA PERFORMS at the Women’s March in Washington.
(photo credit: REUTERS)
Advertisement
Hours after Israeli-Canadian billionaire Sylvan Adams announced Madonna’s slated arrival in Tel Aviv, the chief Eurovision executive said that the singer had yet to sign a contract to appear at the Eurovision Song Contest.
“The European Broadcasting Union has never confirmed Madonna as an act,” said Jon Ola Sand, Eurovision’s executive supervisor, at a press conference in Tel Aviv on Monday evening. “We don’t have a signed contract with her team, and if we do not have a signed contract she cannot perform on our stage.”
Sand said that the EBU is still negotiating with Madonna over the terms of her appearance.
“People have spoken on behalf of the EBU, for many months now, without it being authorized,” Sand said. “We are in a situation now that is a bit strange. We have an artist who would like to participate, and who we would love to welcome there, but we have not signed a contract.”
Sand did not elaborate on the issues holding up the signing of the contract. They are not believed to be about money, since the more than million-dollar cost is being footed by Adams.
Earlier Monday, Adams told Israeli media that Madonna would be arriving in Tel Aviv aboard his private plane on Wednesday morning.
“I’d like to welcome Madonna back to Israel,” Adams said in a video released Monday. “As her host here, in Tel Aviv, I hope to show her around our beautiful sights in our beautiful city.” Adams added that Madonna’s presence will be “adding a lot of glamour” to the Eurovision, and he hopes “that this will be the most successful Eurovision to date.”
But with five days until Madonna’s slated appearance at the Eurovision grand finale, it appears the details are not quite finalized.
Speaking at the same press conference on Monday evening, Yuval Cohen, the deputy executive producer of this year’s contest, said everything else was running smoothly and on schedule.
“We just finished our first run, and it was quite good,” said Cohen of the technical rehearsal for the first semifinal held Monday afternoon. “We are excited – this is our money-time. This is what we’ve been working on for the last nine months.”
Sand echoed Cohen’s sentiments, saying fans should expect to see “three fantastic shows” this year. In particular, he praised the technical side of the Israeli team, who he said were “very advanced” and offered impressive skills when it came to “augmented reality.”
On Monday night, the first full dress rehearsal – which is the first show to which KAN sold tickets – kicked off in Tel Aviv. Beginning at 10 p.m., the first 17 acts and the four hosts took to the stage for a full run-through of Tuesday night’s live show. The Monday night performance is used for the international juries to vote on, as well as being filmed as a backup for the live show. The jury votes count for 50% of each country’s score.
Meanwhile, a Eurovision worker was seriously hurt on Monday morning in an accident in the parking lot of the Expo Tel Aviv.
The man, identified as a 66-year-old from Pardess Hanna, was injured when lighting equipment fell on him while he was unloading it. According to police, the man was treated on the scene by paramedics and transferred in serious condition to Ichilov Hospital in Tel Aviv.
A spokesman for the hospital said Monday afternoon that the man underwent successful neurological surgery shortly after arriving. Dr. Zvi Lidar said that he and his team were able to perform “significant surgical operations,” and that the man’s condition was classified as moderate. “In the coming days,” said Lidar, “the seriousness of the damage and its consequences will be clarified.”