The documentary ‘Aida’s Secrets’ is a fascinating portrait of a family that finds love after trauma. 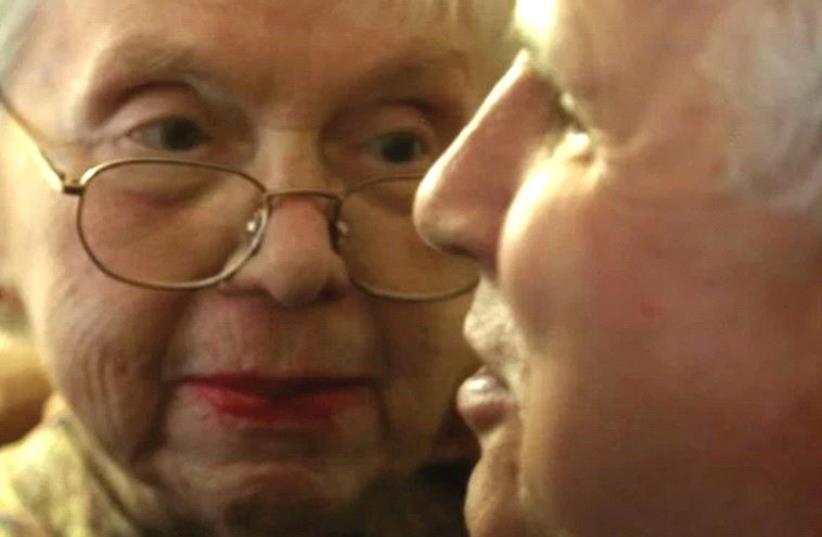 ‘Aida’s Secrets’
(photo credit: PR)
Advertisement
AIDA’S SECRETS
Hebrew title: Hasodot shel Aida
Directed by Alon and Shaul Schwarz
Running time: 90 minutes
In English and Hebrew.
Check with theaters for subtitle information.People like to think that the Holocaust ended in jubilation as the Allies liberated the camps. But the story of World War II is incomplete without a reckoning of the displacement, confusion and loss that followed the end of the war.While those who survived and populated the displaced persons camps were the lucky ones, their lives were still colored by the huge changes that came with the war.Few films have delved into the aftermath and looked at the world of the displaced in the chaos following the Nazi defeat.Aida’s Secrets, a haunting documentary directed by brothers Alon and Shaul Schwarz, tells the story of one family that was torn apart in the years following the war. It’s about two elderly men, raised on separate continents, who discover they are brothers and are reunited. At the heart of this moving film is their mysterious mother, Aida, and the struggles during and after World War II that led her to give away her children.It’s a fascinating portrait of a family that finds love after trauma.Aida was a young, gentile survivor of the concentration camps who enjoyed her newfound freedom after the war. While her behavior would have been considered tame today, by 1950s standards she was quite wild and found herself with children she didn’t feel she could raise. So she gave them up for adoption in different parts of the world.Both in their late 60s now, Izak is a gardener in Israel, while his brother, Shep, who has been blind most of his life, lives in Canada.Each had vague recollections of having known his mother, and each had questions that no one had ever answered. When they were kids, there were many things that people just didn’t talk about.Working as detectives as much as researchers and documentary directors, the Schwarz brothers track down the connections between Izak and Shep and bring them together for the first time since they were infants. They also bring the brothers to see their mother, who is overwhelmed by conflicting emotions. She is delighted to see them, wracked with guilt over how she couldn’t raise them, and determined to evade almost every specific question they are longing to know the answer to.Through Aida, the filmmakers delve into the often rakish life of young survivors in the aftermath of the war. These young people had lived in dread for so many years, that they had difficulty looking ahead to the future, and often, as was the case with Aida, lived for the moment. This is territory that has been covered only in a few films, notably Avi Nesher’s 2010 film The Matchmaker and his current hit film, Past Life, which is about sisters in the 1970s who look into their father’s surprising past, both during and after the Holocaust.Paul Mazursky’s darkly comic Enemies: A Love Story, an adaptation of Isaac Bashevis Singer’s novel, tells a similar tale about a survivor in New York, torn between the gentile woman who saved him and his love for a suicidal Jewish woman. In Enemies, the hero’s life is thrown further into disarray when his wife, whom he believed had been killed, shows up.The Red Cross and other organizations did their best to reunite families, but Aida’s Secret gives an idea of just how daunting a task that was, when people had no idea if anyone from their families had made it, and didn’t even know which country the living might have ended up in.There are a few more twists and mysteries that none of the participants imagined when they began filming, and these add suspense to the film.This is an unusual and moving story about people making new connections at an age when they didn’t expect to, and learning the truth about mysteries they thought would always torment them. At the same time, many will find elements similar to their own families in this story of reunion, redemption and the impossibility of ever truly knowing even those who are closest to us.