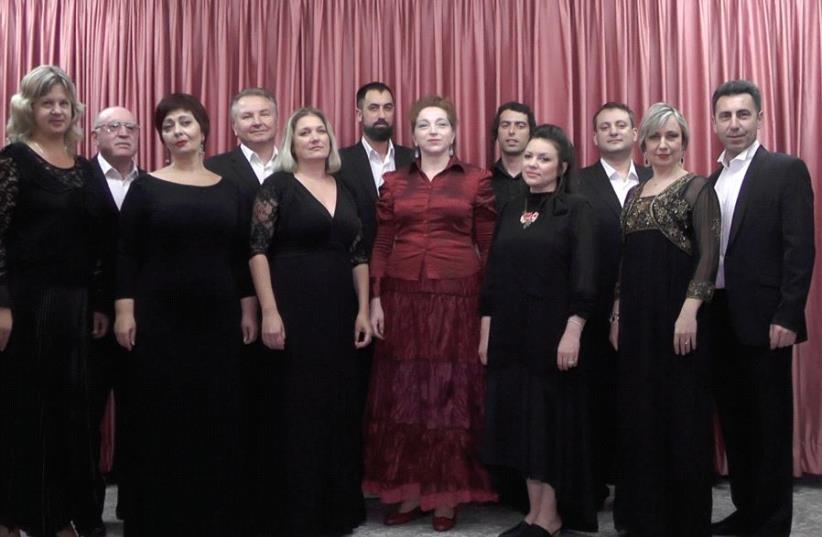 Hymn to the Poet
(photo credit: SERGEY RAUTZKI)
Advertisement
The new Hymn to the Poet festival is a unique musical event, perhaps the first of its kind. It is dedicated to pieces written in the early 20th century by Jewish composers from Moscow and Saint Petersburg.“The first thing that comes to mind when you think of Jewish music are sensitive folk songs such as ‘My Yiddishe Mama’ or ‘Tum Balalaika,’ which is not all – far from it,” says soprano Shirelle Dashevsky, the artistic director of the festival.“There is an entire corpus of excellent works written in a rich and complicated European musical language and inspired by Jewish folk music. It includes lieder [art songs] and chamber music, as well as symphonies, operatic and ballet music. ” Dashevsky explains that this is the output of a group of Jewish composers known as the St.Petersburg Society of Jewish Folk Music.“Originally from Riga, Moscow, Saint Petersburg and other cities, they went to the Saint Petersburg Conservatory to study with prominent Russian composer Nikolay Rimsky-Korsakov. In fact, they did for Jewish art music what the group of Russian composers known as the Mighty Group had done for Russian classical music years before them.They collected and studied Jewish folk songs and melodies and composed classical music based on it. Rimsky-Korsakov, who was a member of the Mighty Group, wholeheartedly supported young Jewish composers’ interest in the music of their people,” she recounts.However, this music is mostly unknown today. It is not studied at conservatories around the world, nor is it performed.“And it’s not because this music is not good enough; just the opposite.While rehearsing for the festival, we, the participants, were slowly but steadily falling in love with these pieces for their sheer beauty and sophistication,” says Dashevsky.“This music was one of many victims of the turbulent 20th century: first, Stalinism in Russia, then WW II and the Holocaust – the audience for this music has gone.”Dashevsky, who is a classically trained singer, came across Jewish art music almost by chance.“In 2005, after the premiere of Mozart’s Cosi fan’ tutte, staged in Jerusalem by the Opera Aeterna Theater Company, Jewish art music revival enthusiast David Ben-Gershon came up to me, praising my performance of Despina. He then asked if I had ever sung classical Jewish music. At the time, my repertoire featured only a few popular folk songs in Yiddish. His unexpected inquiry caused me to question and indeed redefine my own musical identity.Where would I find this wonderful, highquality Jewish music to which I could apply my skills as an opera singer in addition to the gems of Western music?” she says.Ben-Gershon became the driving force behind the project, as well as the researcher, providing Dashevsky with the music scores, which he had discovered in libraries and in personal collections of devotees of Jewish art music all over the world.It transpired that great composers of the past had left behind scores of true musical treasures written in various genres. This was top-quality music, which was as rich and complex as any acclaimed masterpieces of Western music, to which only first-rate performers could do justice.The oeuvre included songs and concertos by Joseph Achron, symphonies and ballets by Lazare Saminsky, pieces by Shlomo Rosovsky and Alexander Krein and even an opera in Yiddish, composed in 1923 and banned by Communist censors after two performances.And that was only the tip of the iceberg.As a result, Dashevsky started to perform the new repertoire and recently recorded her first album of Jewish art songs. The repertoire has been growing over the years, with more artists joining the project. And now the festival, the brainchild of Ben-Gershon.“Indeed, I see it as just the beginning of a major project that will include three more albums dedicated to ensemble-, choral- and instrumental Jewish art music. The same goes for the festival. I hope it will become an annual event. There’s a lot of great music to share with the public!” says Dashevsky.On July 10 at 7:30 p.m. at the Beersheba Conservatory, the Nigunim Le-Ad chamber choir, together with soloists, will perform lyrical and humorous pieces. For reservations, call (08) 629-0019.The closing concert will take place on July 17 at 8 p.m. at the Israel Conservatory in Tel Aviv. It will feature chamber music performed by The Jerusalem Divas Trio (singers Vira Lozinsky, Ruth Levin and Shirelle Dashevsky) and pianist Olga Grinhot, as well as Israeli violinist Eyal Shiloah and pianist/composer Uri Brenner.Yefim Gelman will present the evening. For reservations, call 052- 269-4971.