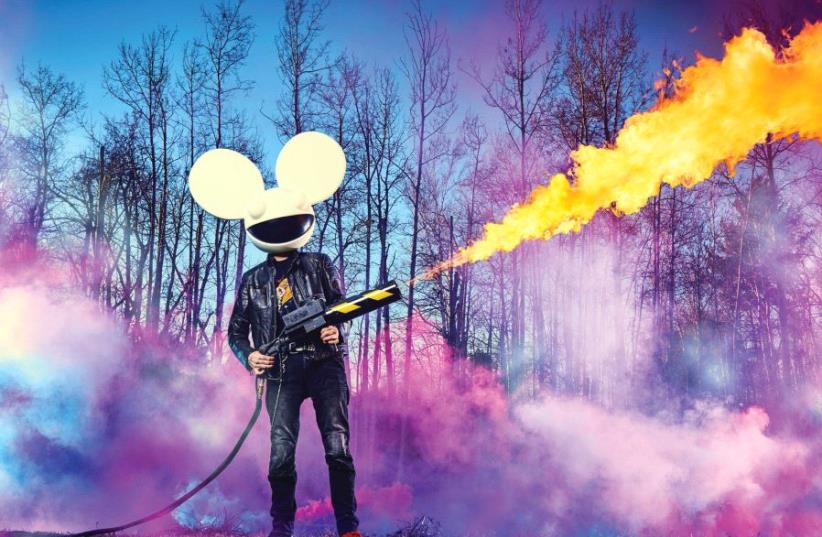 MASKED EDM hitmaker and celebrity DJ Deadmau5
(photo credit: Courtesy)
Advertisement
On June 8, the underground electronic scene will take over Rishon Lezion’s Live Park for XL Extra Loud. After years of chasing, promoter Avi Yossef of Zappa Herzliya finally caught Toronto- born DJ Deadmau5 to headline the event.To call Deadmau5 a DJ would never do him justice. The Toronto-born Jewish legend Joel Zimmerman with the iconic cartoon mouse headpiece (the unique musical moniker was inspired by the carcass of a frozen rodent that he found in a computer he’d constructed) is a gifted producer who broke through the electronic dance music (EDM) limits and into a league of his own, not bound by rules. His chart-breaking singles include “Ghosts & Stuff,” “I Remember” and “Sofi Needs A Ladder,” and he has been nominated for several Grammy Awards.Yossef talked to The Jerusalem Post about XL Extra Loud, the local electronic scene, and how he achieved the impossible: bringing Deadmau5 to Israel.When did you first get involved in the electronic scene? I’ve been involved since the very start. In the early ’90s, we realized that there was great music here that needed to be heard overseas, so I started collecting music from people who produced locally (a rarity back then). I was pushing trance music as it exploded in Israel and other areas around the world. In 1995, I signed an act out of Israel called Infected Mushroom who became an important symbol for Israeli music, and things kept growing from there.Were you working with Zappa Herzliya at the time?No. Back then I was working for a label called BNE, which was supporting local electronic music abroad.Over 15 years, I built a network of international partners releasing Israeli music. I eventually moved on to the Zappa group, which is where I now function as their international promoter.And what does that entail?Identifying trends, acts, popularity, things that will work in the local market, things that won’t, and so on. Our market is very different from other regions. For instance, ’80s and ’90s music is very popular here, which means that ’80s and ’90s artists are well embraced when they come to perform in Israel. I oversee the process of getting these artists here.So you oversaw securing Deadmau5 then?Yes. With Deadmau5, there has been this long chase that is finally going to end this week. We’ve been after Joel Zimmerman [aka Deadmau5] for years. We’ve had an open channel to his agents discussing several potential locations, engagements and festivals, but the dates just never worked out. About two months ago, I got a call that Joel had finally agreed to stop by during his Europe tour – it was so relieving.How’d you finally catch the ‘mouse’?Deadmau5 sits on his own cloud in the universe of stardom. Yet, he’s the opposite of shallow. He ridicules other EDM producers that live the “rock star” life since he would rather prove his musicianship. That being said, he’s known to be very selective.Over the last few years, he’s been performing less and less and less, which made it difficult to draw him over to this side of the planet. Deadmau5 managed to squeeze Israel into his European tour lined up for the summer, made easier by the fact that Israelis tend to hang out and party on Thursday nights, while European shows are usually on Fridays and Saturdays.

Technically speaking, Deadmau5 has been playing around with leaving more space between tracks lately.  How do you think the Israeli scene will respond to this new approach?The fact that Deadmau5 is coming to Israel is the news here. In terms of technical choices, he is doing a festival run and seems to be less focused on experimenting and more focused on getting the crowd’s love back. A lot of people haven’t seen him for a while, so I believe he’s aiming to regain appreciation with a combination of all of his material and everything that his supporters and supporters of the genre love. There is Deadmau5 in the studio, which is true ingenuity, but there is also Deadmau5 live – his persona glows on stage.This event is more than just Deadmau5 though. There are a wealth of talented Israeli DJs in the lineup as well.Indeed. I put together the musical agenda piece-by-piece to create an event programmed to meet and satisfy the wide [tastes of electronica fans]. My vision was a progression from deep tech house music by local Tel Aviv champions like Stephan Bazbaz and Omri Guetta, to Deadmau5 at the peak of the whole night, and afterwards, instead of a pressure drop, things really kick off with Astrix and Freedom Fighters until the morning.In your opinion, is there anything in the Israeli electronic scene that currently sets it apart from the rest of the world?In fact, there is. In being such a small market and close community, things advance here quicker than anywhere else. We adapt new trends and factors at a quicker pace, which sets an influential bar for Tel Aviv and Israel in general. People see what’s going on and if it catches here, they know that it’s just a question of weeks or months before it becomes an epidemic outside of Israel in similar places.

Tell me more about the event in general. How long has XL Extra Loud been going on? XL excelled by being an energy drink that is naturally associated with the electronic style and the Zappa group. The XL initiative started supporting electronic music about 10 years ago. We changed the initiative’s name to XL Extra Loud just this year, but it maintains the same goal of promoting electronic events and festivals with major headliners here in Israel. This isn’t a festival, rather a standout event that we’ve built around Deadmau5. It’s also very unique because it isn’t commercial in nature – the focus is geared toward serving the underground scene.Why Rishon Lezion? The Live Park at Rishon Lezion is Israel’s hottest spot for live shows.It is the park’s third year and everybody who’s somebody has played this venue, internationally speaking – names like Tame Impala and Jason Derulo. There is something special about being able to get out of Tel Aviv, look up in the sky and realize that you’re not surrounded by urban buildings. The atmosphere is completely different. You’re detached, in a new world.