In February, officials from the ministry said they identified and repaired a weakness in the Arrow 2 missile defense system that was discovered during a test last September. 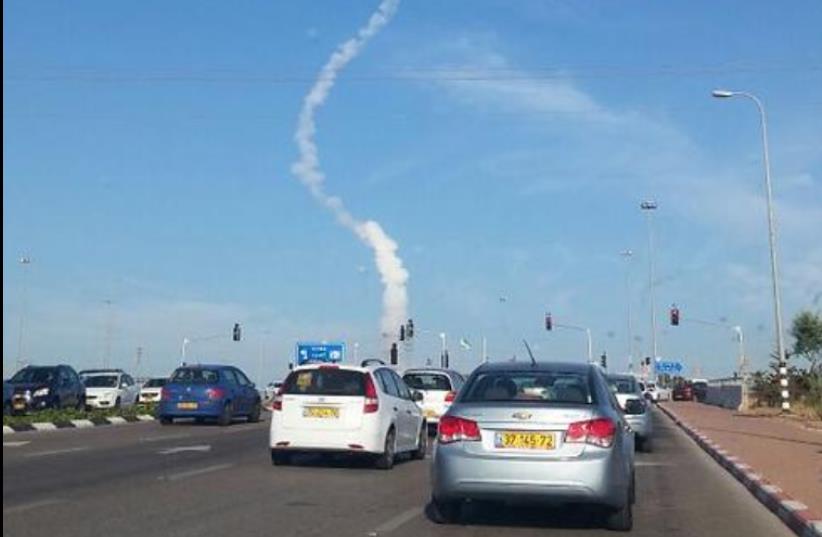 Ballistics tests over Tel Aviv
(photo credit: TWITTER/ JOSHUA DAVIDOVICH)
Advertisement
The Defense Ministry carried out a test of a new rocket propulsion system from a base in central Israel on Tuesday morning, but released few details."The test was planned by the defense establishment long in advance, and was carried out as planned," it said, delcining to elaborate.In February, officials from the ministry said they identified and repaired a weakness in the Arrow 2 missile defense system that was discovered during a test last September.The need for the repair became apparent after a test against “a future threat that does not currently exist in the arsenal of Israel’s enemies” resulted in a miss, said officials from HOMA, part of the Defense Ministry’s Administration for the Development of Weapons and Technological Infrastructure.“Intercepting such a threat requires a significant broadening of the limits of the system,” the officials said. “The interceptor passed very close to the target but did not directly strike it. Hence, we could not assess the overall result.”Engineers conducted a “complex analysis to see if shrapnel from the interceptor struck the mock warhead and destroyed it,” they explained.“A weak spot was identified in the system that had no influence on the current range of Arrow 2 capabilities that are operational. The repair was successful.”In summing up 2014, HOMA highlighted the performance of the Iron Dome anti-rocket system as the most outstanding event in terms of air defense.Iron Dome intercepted 740 Gazan rockets heading for built-up areas during last summer’s Operation Protective Edge, representing a 90 percent success rate. Defense industries brought forward delivery of three batteries at the start of hostilities in July, and significantly increased the size of Israeli protected territory.In January 2014, a test of the Arrow 3 missile interceptor involving free flight into space was successful.
That system is designed to intercept incoming ballistic missiles while they are still in space.In December 2014, the Defense Ministry, together with defense industries, conducted the Arrow 3’s first interception test. A Sparrow-type target missile appeared at high altitude, but, according to officials, it did not appear in the proper sector. In accordance with stringent safety parameters, engineers decided not to fire the interceptor.The event was subsequently classified as a “no test.”