Resident 'forced' to sign agreement to demolish his own home. 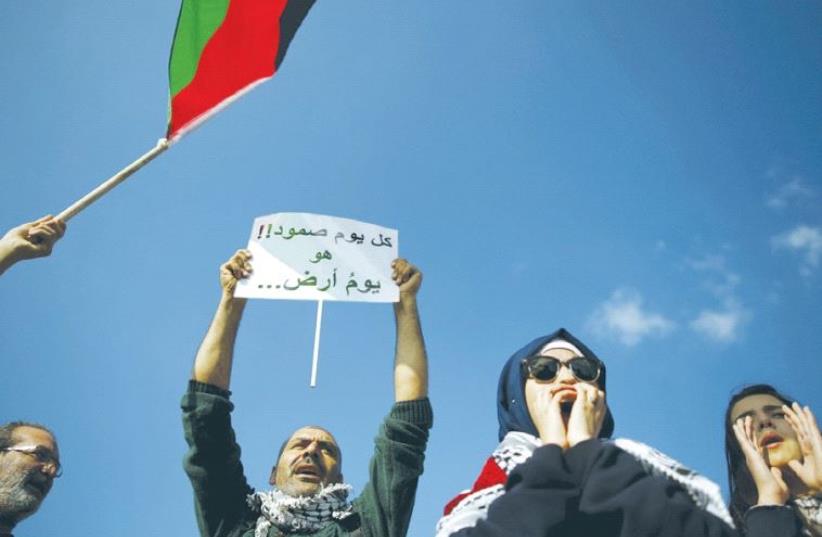 BEDUIN TAKE part in a rally marking Land Day in Umm al-Hiran in March.
(photo credit: REUTERS)
Advertisement
The state's efforts to force Beduin residents to relocate from their unrecognized Negev village of Umm al-Hiran so as to make way for a new Jewish town to be established in its place have begun to bear fruit, with one resident agreeing under apparent pressure to demolish his home and animal sheds.Under the agreement, the resident, Ahmad Abu-al Kaeean, will relocate to the nearby Beduin city of Hura, where authorities hope the entire village of some 700 people will relocate. He has already destroyed five sheds for sheep and chickens and has until December 30 to demolish the structures in which his family of 30 live, said Ra'ad Abu al Kaeean, head of the local residents committee, who is from the same extended family as Ahmad. Police had been poised to demolish the structures on November 23 as the first stage in destroying the entire village, but delayed the operation without offering an explanation.Ra'ad Abu al Kaeean said that Ahmad signed the agreement under heavy pressure from police who came to his home at night. ''It was by force, a rape, they forced him to sign. He fainted from this, he lost consciousness, we were with him all night in the hospital Friday. It's not by free will.''Ahmad Abu al Kaeean could not immediately be reached for comment. Police spokesman Micky Rosenfeld said he was unaware of the incident. Police turn up at home demolitions in coordination with courts, he said, but units ''aren't turning up at 3:00 in the morning.''Umm al-Hiran residents say they refuse to move to planned towns because this would force them to change their rural way of life.Umm al-Hiran has been the scene of an extensive 13-year legal battle between residents and the state.It is the second time residents are being forced to relocate. In 1956, they were moved under military order and resettled by the IDF in their current location after being evicted from the land on which they were living in 1948.But they were never given title to the land. A 2015 Supreme Court ruling authorized the state's plan to demolish the village to make way for the new town of Hiran, to be populated by mostly religious Jewish families.Beduin leaders fear that if Umm al-Hiran is emptied this will set a precedent for other unrecognized villages in the Negev.Eliyahu Kamisher contributed to this report.