On Independence Day eve, 82% of Israelis happy with country's achievements

More than 80% of Israelis say the country’s achievements outweigh its failures. 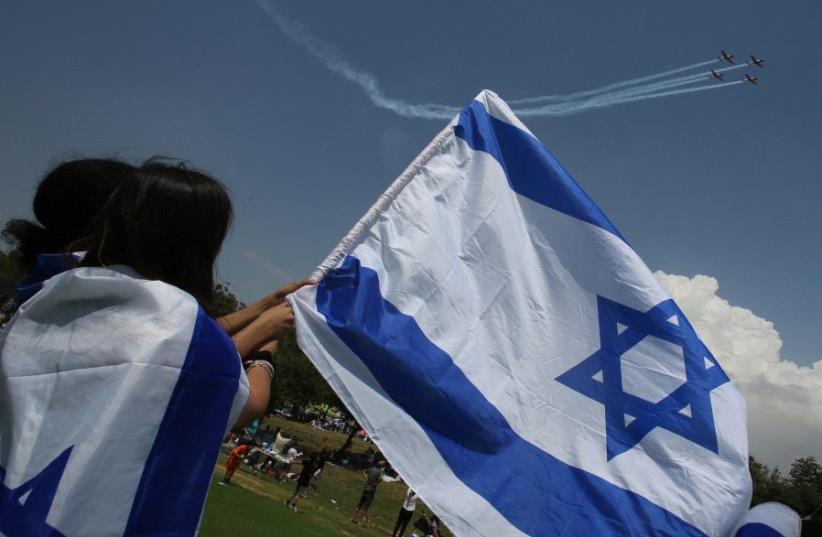 Israelis excitedly look on as the IAF performs its annual flyover.
(photo credit: MARC ISRAEL SELLEM)
Advertisement
According to Dr. William Cubbison, a researcher with IDI’s Guttman Center for Public Opinion and Policy Research, the results this year are similar to those around the time of the 66th and 70th Independence Days.
In 2018, 80% of Israelis said they were satisfied with Israel’s achievements, an increase from 71% as compared with in 2014.
This year, among Arab Israelis, the numbers who think there have been much more successes was 42%, while those who say there were somewhat more successes is 27%.
Similarly, last year, there was a gap between Jews and Arabs, with 87% of Jewish Israelis satisfied with Israel’s achievements prior to the 70th Independence Day, compared to just 40% of Arab Israelis.
A segmentation of the Jewish sample by religiosity (self-definition) revealed that among the religious, the rate of those who view the successes as greater than the failures is the highest (93%), versus 80% among the secular.
Similarly, the Right (self-definition) stands at 90%, versus 79% on the Left.
The survey was conducted between April 30 and May 2, before 700 rockets rained down on Israel from Gaza killing four citizens in a 48-hour escalation. Then, when IDI asked, “How do you feel about Israel’s security situation in the foreseeable future?” the organization found that more than half (58%) of Jews and Arabs (51.5%) were optimistic about the future of Israel’s security.
Likewise, most Israelis (54%) are optimistic about the future of democratic governance in Israel. However, only 39% of Arab Israelis are optimistic of the future of the country’s democracy.
Segmentation revealed a correlation between levels of religiosity and the aforesaid optimism, in that the more religious one is, the more likely he or she is to be optimistic about the future of Israel’s democracy.
More than three-quarters (77%) of haredim, 83% of the national-religious, 65% of traditional religious, 61% of non-religious and 36% of secular people are optimistic about the future of democratic governance.
From 2003 to 2018, the Israel Democracy Index asked respondents if they were proud to be Israeli.
Over time, Jewish Israelis have consistently expressed more pride in being Israeli, although in 2018 a majority of Arab Israelis also said they were proud to be Israeli.
In 2018, 88% of Jewish Israelis said they were “very proud” or “had quite a lot of pride,” compared to 51% of Arab Israelis.
Moreover, Israelis are very satisfied with what the country has achieved.
“The past decade and a half has seen a significant rise in positive assessments of the country’s overall situation,” said Cubbison.
“But, when looking ahead towards the future, Israelis are less optimistic: large gaps exist between Arab and Jewish Israelis and between Right and Left, both with regard to their pride in being Israeli, and on the future of the state.”
The Israeli Voice Index was conducted by Internet and telephone and reached 621 people who were interviewed in Hebrew and 163 in Arabic.
The maximum sampling error is +/-3.6%.