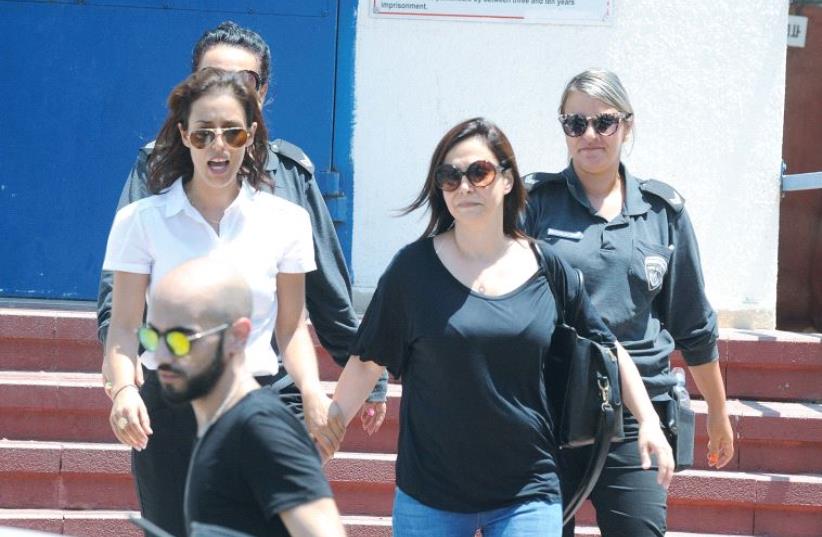 Eti Alon leaves Neveh Tirza Prison in Ramle yesterday after serving nearly 15 years for embezzlement.
(photo credit: AVSHALOM SASSONI)
Advertisement
Eti Alon was released from prison on Thursday after serving nearly 15 years for a massive embezzlement scandal in which she stole over NIS 250 million from the now defunct Trade Bank, to cover her brother’s extensive gambling debts.The Prisons Service parole board agreed to commute Alon’s 17-year sentence after the prosecution announced that it would not oppose her release from Neveh Tirza prison in Ramle.“[Eti Alon] was a model prisoner during all her years in prison, she participated in the rehabilitation process and underwent individual therapy.... None of this could reduce the severity of the offenses; however, it is sufficient to serve as a solid basis for the early release decision,” the parole board said in a statement.In 2015, the Central District Court decided not to release the convicted embezzler before her 17-year sentence was completed, after receiving the State Attorney’s Office’s rejection of an appeal against Alon’s early release.In April 2002 Alon admitted to stealing more than NIS 250 million over five years, while she was deputy head of Trade Bank. She had transferred money from customers’ accounts to her brother Ofer Maximov, who had accumulated approximately NIS 100 million in gambling debts to organized crime groups. Alon was convicted in 2003, and her brother was sentenced to 15 years in prison.According to the Walla news website, Noel Maximov, the daughter of Ofer Maximov and Eti Alon’s niece, stated, “I am happy they decided to release her. I cannot describe the feeling; I need more time to allow it to sink in. I hope it paves the way for the release of my father. He recovered, he works every day outside, he’s a model prisoner.”Alon’s lawyer, Limay Mor, told Walla that Alon has a long way to go to integrate back into society. “This is only the first stage of her becoming a freed woman after years of struggle, during which she recovered morally, took responsibility and expressed remorse.”The parole board noted that the economic offense was perhaps the worst in Israel’s history as it sent shock waves through the country’s banking sector, leading to the collapse of the Trade Bank, leaving NIS 500 million worth of uncovered customer deposits, which the state was required to reimburse through its deposit insurance program.Extensive banking regulations were instituted as a result of this case to prevent employees from unsupervised access. In addition, the banking sector was consolidated as the public lost faith in small banks and larger banks bought them up.According to the terms of her parole Alon must meet with police once every two weeks, she is unable to leave the country until 2019, and she is barred from leaving her house between 10 p.m. and 6 a.m. She is also prohibited from contacting her brother for a year.