An Israeli drone is seen flying over Gaza as seen from the northern Gaza Strip border, April 9, 2011.
(photo credit: REUTERS)
Advertisement
The Defense Ministry has suspended the export license of Israeli firm Aeronautics Defense Systems following an investigation into claims Azerbaijan asked it to carry to out a live demonstration of an armed unmanned aerial vehicle against an Armenian military position last month.Aeronautics informed the Tel Aviv Stock Exchange on Monday night that the Defense Ministry’s Defense Export Controls Agency was suspending the marketing and export permit for the company’s Orbiter 1K model UAV to “a significant customer.”While not mentioning Azerbaijan, the South Caucasus nation, which borders Iran, has been one of the company’s most important customers in recent years and the company opened a factory there in 2011 to build Aerostar and Orbiter UAVs. 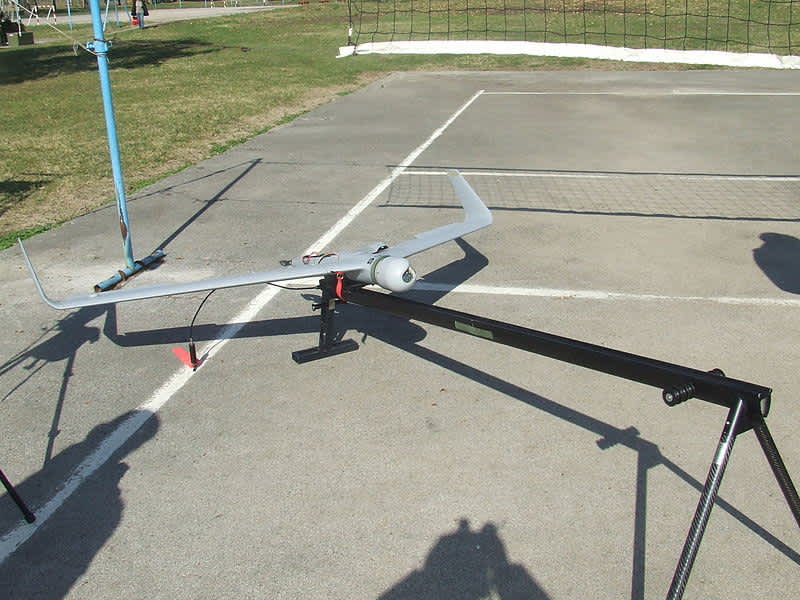 Drone "Orbiter" of Serbian army manufactured by Aeronautics Defense Systems. (Wikimedia Commons)
According to Aeronautics, the contract for the Orbiter 1K totaled $20 million over the next two years and the freezing of the license would mean that the company would be prevented from exporting the drones.Aeronautics’ Orbiter-K is a loitering suicide drone capable of carrying a 1- to 2-kilogram special explosive payload.The Defense Ministry’s rare move came after The Jerusalem Post’s sister publication Maariv reported earlier this month that a team belonging to the company arrived in Azerbaijan to finalize a contract for the sale of the Orbiter 1K and was asked to strike an Armenian Army position. According to the report, the two Israelis operating the UAV refused to hit the position and senior representatives of the company took control and operated the craft themselves, ultimately missing their targets.Hay Zinvor, the newspaper of Armenia’s Defense Ministry, quoted Col. Armen Gyozalian, the commander of an army unit stationed in northeastern Karabakh, as saying that while no military hardware was damaged, two of his soldiers were lightly wounded when one of its front-line positions was hit with a suicide drone on July 7.Aeronautics strongly denied that the event ever occurred, releasing a statement at the time stating that the company “never performs demonstrations using live fire and that was true in this case as well.”Israel’s Defense Ministry said that while “as a rule, the Defense Ministry does not make it a practice to comment on issues involving military exports, the claim is being examined by the relevant parties at the ministry.”Azerbaijan and Armenia have a long-standing dispute over the enclave of Nagorno-Karabakh and violence has in recent years led to the deaths of dozens of soldiers. Nagorno-Karabakh is located within Azerbaijan and is internationally recognized as being part of the country, but a large part of it is governed by separatists who seized control of the mountainous region backed by Armenia in a war in 1988-94.The two countries signed a cease-fire in 1994, but there has not been no peace treaty, and during the last flare-up last year it was reported that Azerbaijan has used suicide drones against Armenian targets, including a Harop drone made by Israel Aerospace Industries that killed seven Armenian soldiers when it hit a bus they were traveling in.A year after the violent flare-up in Nagorno-Karabakh, a report by Crisis Group this past June warned that the two countries were “closer to war than at any point since the 1994 cease-fire.”Since the end of the April 2016 escalation, Azerbaijan has increased spending on weapons, procuring heavy weaponry and other military equipment from countries such as Israel, Russia, Pakistan and Turkey, according to the Crisis Group report.It also found that there has been a significant increase in deadly incidents in the first half of 2017, which coupled with a stalled settlement process, “could develop could develop into larger-scale conflict, leading to significant civilian casualties.”