"The liberation of Jerusalem changed the city fundamentally." 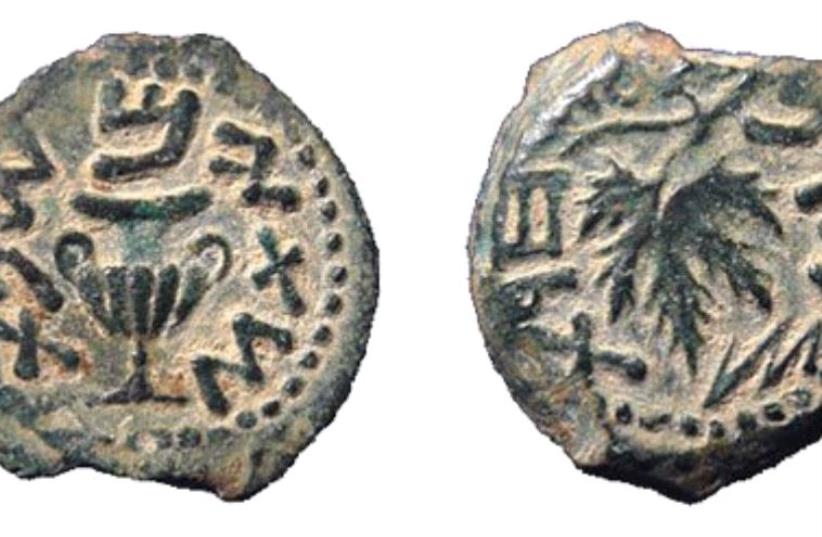 ‘Free Zion’ coin minted 1,967 years ago.
(photo credit: CULTURE AND SPORT MINISTRY)
Advertisement
Long before the “Free Palestine’ slogan became popular – in fact about 1,967 years before – a “‘Freedom of Zion” coin was minted and circulated in Jerusalem.Culture and Sport Minister Miri Regev unveiled that coin at Sunday’s cabinet as part of a presentation she gave about preparations for next year’s celebration of 50 years since the reunification of Jerusalem. The coin was uncovered during an excavation about a month ago of a recently uncovered road in Jerusalem. The excavation site will be opened to the public during Hanukka.The ancient coin was one of a series minted during the Jewish revolt against the Romans that eventually led to the destruction of the Second Temple in 70. The flip-side of the coin bears the inscription, “Two years to the Great Revolt,” which dates it to the year 67.
How archeologists uncover ancient coins
“Exactly 1,900 years later, in 1967, the paratroopers entered Jerusalem’s Old City and renewed its freedom, and ours,” Regev said. “We restored Jewish sovereignty to Jerusalem. We threw into the dustbin of history the coin issued by Titus after his victory over the rebels: Judea Capta [Judea Captive].”Regev was referring to a series of commemorative coins issued by the Roman Emperor Vespasian commemorating the Roman defeat of Judea and destruction of Jerusalem.Regev, noting the recent “ridiculous” UNESCO resolutions that sought to expunge any Jewish connection to the Temple Mount, said, “In 1967 we returned to Bet El, Hebron, Shiloh and Elon Moreh.“These are places stamped into Jewish history and Jewish identity,” she said. “Places where our patriarchs and matriarchs walked, [where] Joshua and the Judges [walked], places where the prophets prophesied. And the peak, of course, is our return to a united Jerusalem, the liberation of all Jerusalem, including places holy to us, first and foremost the Temple Mount.”Noting the upcoming jubilee celebration, Prime Minister Benjamin Netanyahu said that “until the Six Day War we Jerusalemites lived under the fear of sniper fire and war in the middle of the city.”The liberation of Jerusalem changed the city fundamentally, he added.“Jerusalem ceased being a border town, rather it became the vibrant capital of Israel.”Netanyahu said that during the upcoming jubilee, Israel will underline its connection not only to Jerusalem, but also to the rest of the Land of Israel, in the hopes that the international community will also better understand that connection.