Archaeologists have been unable to determine the use or purpose of an 8.5 kilogram gold tool discovered in a Jerusalem cemetery. 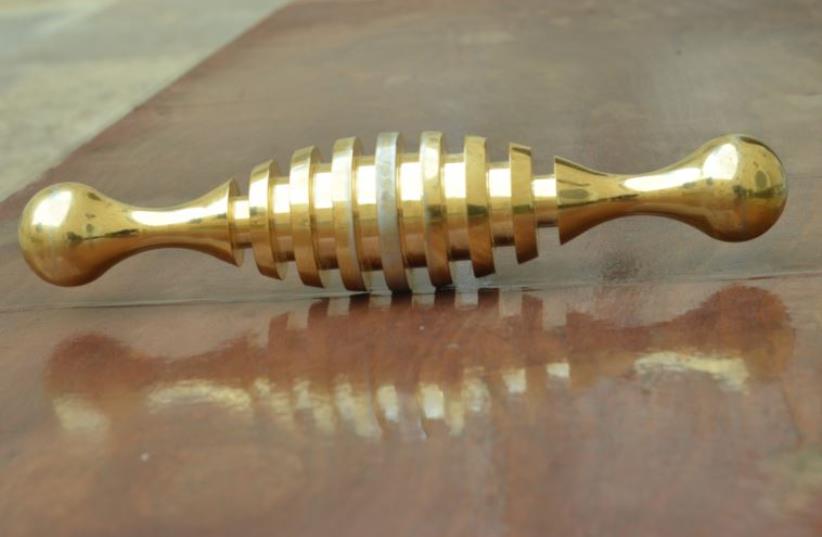 Ancient 8.5 kilo gold tool discovered in Jerusalem cemetery ‏
(photo credit: Israel Antiquities Authority)
Advertisement
The Antiquities Authority turned to the public Tuesday to understand the purpose for a mysterious artifact that was discovered in an old building in a Jerusalem cemetery.Several months ago, a maintenance worker for the cemetery noticed an abandoned package inside an old structure on the grounds. In accordance with security protocol, the worker immediately alerted police forces in the area who carried out a controlled explosion within the building to eliminate any possible threat from the package.The damage caused to the structure revealed a gold-colored object which was turned over to the authority for study.At 8.5 kg., the IAA has been stumped by the gold object, having never seen anything of the like in the past. The object has since been taken in for testing and analysis by experts who tried to understand the use and purpose of the item.After several months of tests and studies, the IAA, unable to assign a name to the mysterious object, has now turned to the public for help determining what the object is and how it ended up in the cemetery structure.So, we turn to you. What do you think it is? Send your ideas to letters@jpost.com.