Israel conducts 'experimental' rocket test over heart of the country

Images shared on social media showed a projectile streaking through the sky. 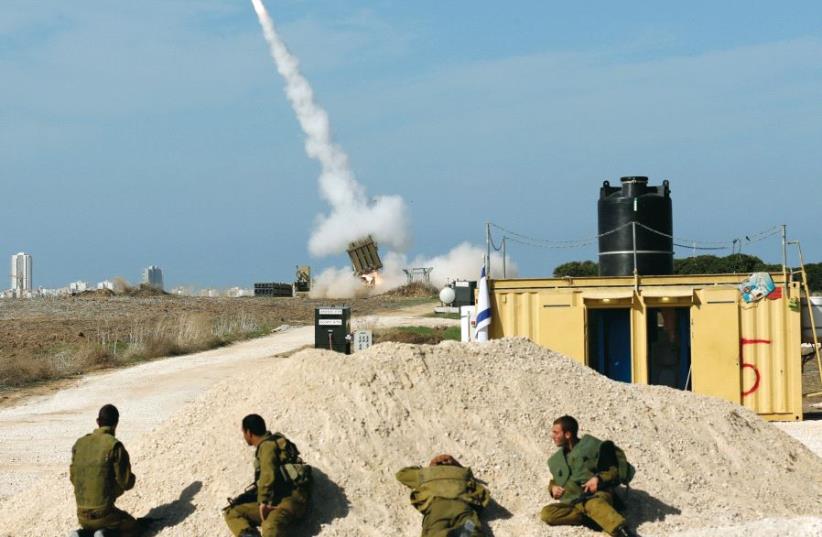 Israeli soldiers watch as an Iron Dome launcher fires an interceptor rocket near the southern city of Ashdod in 2012
(photo credit: REUTERS)
Advertisement
The Defense Ministry said Monday that it conducted a successful experimental test of its rocket propulsion system from a military base located in the center of Israel. Images shared on social media showed a projectile streaking through the sky.Israel has a multi-layered aerial defense system, which includes the Iron Dome, Arrow and David’s Sling, and missile system tests such as these are not uncommon. Rocket propulsion systems are designed to launch large systems such as satellites, ballistic missiles and large ground to air missiles.The launching, conducted in the early morning hours, was planned in advance and carried out as planned. There was no comment on whether or not the test was successful nor what system was tested but some speculated that it may be the surface-to-surface Jericho 3, an intercontinental ballistic missile which according to foreign reports can support a nuclear payload.

In 2013, foreign media outlets reported that the Defense Ministry carried out a test launch of a rocket propulsion system as part of the development of the Jericho ballistic missile, speculating that the missile had a range of 4,000km. Israel has since been continuously trying to improve the system, both in terms of range and accuracy and it is now reported to have a range of over 10,000km. Others speculated that it was a testing of the Arrow system designed to intercept ballistic missiles outside of the earth’s atmosphere. The Israel Air Force officially received the  Arrow-3 interceptors from the Israel Missile Defense Organization in January and according to IMDO Director Moshe Patel, further trials of the system were expected as Israel will continue to work with the United States in developing additional capabilities for the system.In 2015 during the testing of advanced version of the system the Ministry of Defense announced that one of the tests had failed and another had been called off at the last moment. The first use of the Arrow system occurred in April when the system was launched to intercept a Syrian regime air defense fired three surface-to-air missiles towards IAF jets. Israel’s air defenses currently include the Iron Dome, designed to shoot down short-range rockets and the Arrow system which intercepts ballistic missiles outside of the Earth’s atmosphere. The David’s Sling missile defense system is designed to intercept tactical ballistic missiles, medium- to long-range rockets, as well as cruise missiles fired at ranges between 40 to 300km. The advanced systems provide Israel will a comprehensive protective umbrella able to counter threats posed by both short and mid-range missiles used by terror groups in Gaza and Hezbollah as well as the threat posed by  more sophisticated long-range Iranian ballistic missiles. Alongside the July 2015 Iran nuclear deal signed by world powers aimed to curb Tehran’s nuclear program, the United Nations Security Council passed a resolution that “called upon [Iran] not to undertake any activity related to ballistic missiles designed to be capable of delivering nuclear weapons, including launches using such ballistic missile technology.”Nonetheless Tehran has since carried out multiple ballistic missile tests and Amirali Hajizadeh, head of the Iranian Revolutionary Guard Corps airspace program, was quoted by the semi-official Fars News agency as saying that Iran would continue its ballistic missile program despite international criticism.Israel and the United States remain concerned that Iran has continued to work on its nuclear program and last week the IRGC said that it had established a third underground ballistic missile production facility in southwestern Iran.
Advertisement
Subscribe for our daily newsletter