IDF to allow Reform rabbis to officiate at military funerals

Petition by Hiddush said military was discriminating against non-Orthodox soldiers. 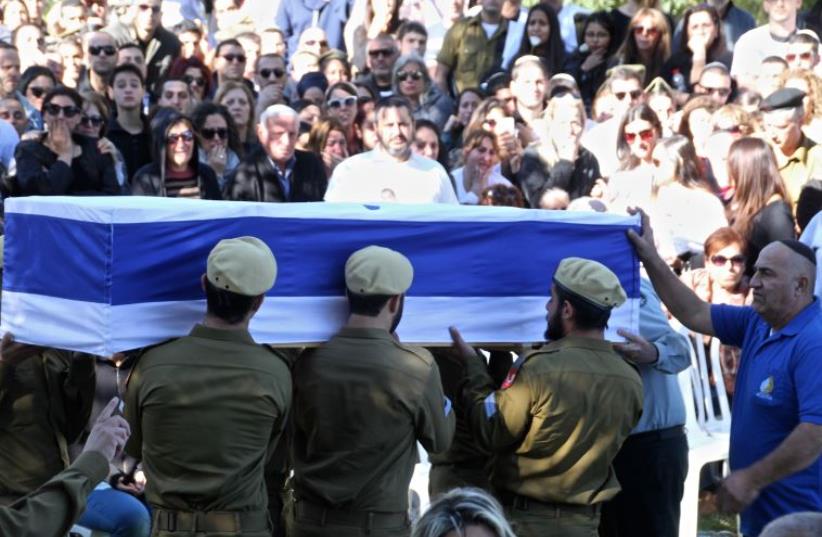 The funeral in Jerusalem Mt. Herzl Military cemetery of Ziv Mizrahi, 18, who was stabbed to death by a Palestinian assailant at the Dor Allon gas station on Route 443 in the West Bank
(photo credit: TOVAH LAZAROFF)
Advertisement
The IDF will now allow a Reform rabbi to conduct full military funerals for fallen secular soldiers, complete with all military characteristics, the NGO Hiddush announced on Thursday.The ruling came two years after a petition was filed in the High Court of Justice against the IDF by Attorney Uri Regev on behalf of the Hiddush Association for Religious Freedom and Equality, which he heads, claiming that non-Orthodox soldiers were discriminated against.Hiddush’s petition asked that the army’s orders be changed to enable a full military burial that respects the worldview and way of life of fallen IDF soldiers and their families who prefer a secular or non-Orthodox burial.The petition claimed that the army does not allow for every Jewish soldier to be buried according to his faith but rather forces him to submit to an Orthodox military funeral run by the military rabbinate.Regev told The Jerusalem Post that it had been a long back and forth process between the state, the IDF and Hiddush.“The hearing today dealt with certain issues that had been left uncovered when the IDF responded to us in April that this process had been changed,” he explained. “There were several questions that we were leaning on the state to clarify, which included allowing female and male reform rabbis to conduct the services and if there was something in their changes that we wouldn’t agree to.”He explained that this was why it was so important that Thursday’s hearing was on the record, adding that this decision pertains to the Conservative Jewish movement as well, enabling “a full and practical recognition of the right of IDF soldiers to grant them the last honor in accordance with their faith and respecting their way of life.”What is important to Regev is that this decision will be “sufficiently publicized so that families are aware of the fact that they can choose an alternative” to the standard service. He added that “all in all it had been a positive experience,” which had needed “the fear of the court.”“If you can have Reform and Conservative bar mitzvahs and weddings, and support to soldiers offered by these movements, why should it not be possible for their services to be offered in burial as well?” he said. “It should be self-understood that religious freedom is the norm to follow.”Speaking with an IDF soldier who asked to remain anonymous, she said that this decision “means so much to me and my family.” She said she had made aliyah from Los Angeles just over a year ago and that her family is connected to the Reform synagogue near their home.“For me, it was a bit of a concern – you always hope you’ll stay safe as a soldier and that nothing will happen, but the reality is that if you’re in the IDF, you might get killed in an accident or in combat – you never know,” she explained. “To have that clarity and knowledge that if, God forbid, something happens to me, my family will have the choice – to choose if they want a Reform ceremony that includes all the accolades of a full burial, or they want to have an Orthodox ceremony.”She added that the choice should always belong to the family, and does not belong to the IDF or the state.In a statement to the Post, the Israel Movement for Reform and Progressive Judaism said it welcomed the state’s judgment.Rabbi Gilad Kariv, president and CEO of the Israel Movement for Reform and Progressive Judaism, said that “in a reality in which thousands of soldiers and soldiers celebrated their bar and bat mitzvah ceremonies in Reform communities, and thousands of veterans ask Reform rabbis to officiate their weddings, the change in the position of the state and the army is a necessary and required one.”“This measure shows that, despite the waves of incitement and institutional discrimination against Reform Judaism, Israeli society creates, in reality, a blessed reality in which there is more than one way to be Jewish,” he highlighted. “We pray that all rabbis from all streams of Judaism will accompany Israeli families only in moments of joy and celebration.”For decades, the military order dictated that soldiers must be buried by a military rabbi in an Orthodox religious ceremony according to Jewish law.Although the IDF changed its orders in 2017, allowing families of fallen soldiers to determine whether to have a religious or civil funeral, it would not include several military characteristics, including ceremonial carrying of the coffin, a wreath-laying ceremony, an honor guard and a firing squad, and an official military eulogy.In response to Hiddush’s appeals and following negotiations between the two sides, the IDF agreed to reestablish the orders in a manner that would enable the families to choose the nature of the military funeral ceremony, in accordance with the demands of the NGO.Following the Supreme Court ruling, the military and its rabbinate will now allow Reform rabbis, as well as representatives of other streams of Judaism, to conduct full military burial ceremonies and secular funerals in military cemeteries.During Thursday’s hearing, the IDF promised to publish the additional amendment to the orders in the coming months.