Salah is scheduled to begin serving his sentence on November 15. 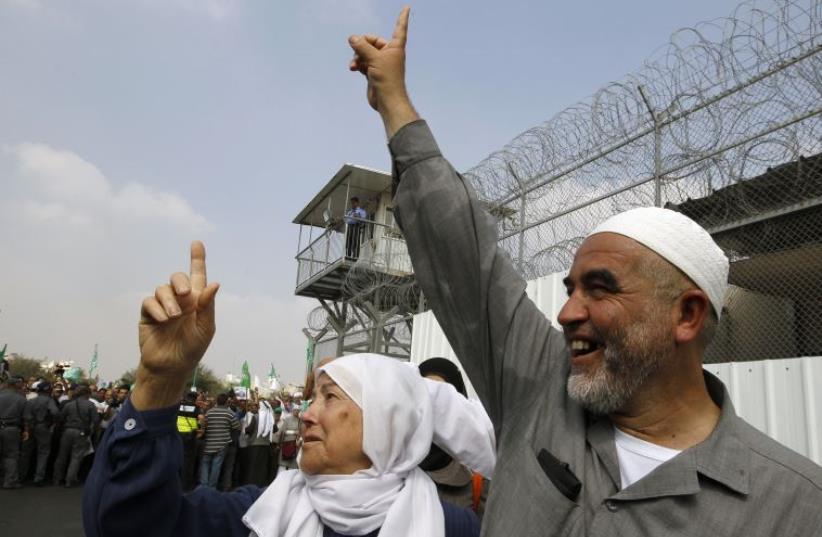 Sheikh Raed Salah
(photo credit: REUTERS)
Advertisement
Raed Salah, the leader of the extremist Northern Branch of the Islamic Movement, will serve the 11-month sentence he received in March for incitement in a 2007 speech after the Jerusalem District Court on Tuesday rejected his appeal.Salah is scheduled to begin serving his sentence November 15.“ We will continue to defend al-Aksa until we win,” he said after the decision, Walla reported.Dozens of supporters had accompanied Salah to the court.The decision comes at a sensitive time during which daily terrorist attacks are being perpetrated by Palestinians against Israelis, and could set off even more protests and violence from within the Israeli Arab sector, which sees Salah as one of its leaders.Joint List MK and Ta’al party chairman Ahmad Tibi told The Jerusalem Post following the court decision that it “was influenced by the impassioned public atmosphere.”“We must stop the campaign against the Islamic Movement,” he said, adding that the government is seeking to transfer responsibility for the current violence to other parties, including the Islamic Movement.Zionist Union MK Itzik Shmuli, however, called the ruling “moral and just.”“It is about time that the lead inciter goes to jail, and the longer the better,” he said.“In recent years, the northern branch of the Islamic Movement has taken a radical and violent stand that, on a regular basis, uses malicious and false incitement against the state.”Muhammad Barakei, Arab Higher Monitoring Committee head and former Hadash chairman, argued that it was a political decision, saying it was against the entire Arab public.During his previous court appearance two weeks ago, Salah had shouted out: “In spirit and blood we will defend al-Aksa. Whoever thinks that they can scare us by putting us in prison is mistaken.”At that time, Tibi told the Post that the attempt to jail Salah was an effort “to exploit the tension and fervor in the street to quickly put Salah in jail as part of [Prime Minister Benjamin] Netanyahu’s effort to ban the Islamic Movement.”Prof. Lawrence Rubin, a Middle East expert from the Sam Nunn School of International Affairs at the Georgia Institute of Technology, told the Post Tuesday: “We shouldn’t expect Sheikh Raed’s influence to disappear just because he’s in prison.”Following the earlier appearance Rubin had said, “Salah still has to maintain a delicate balance because the Israeli authorities could shut down many of his financial operations he uses to fund his social welfare programs, mosque activities and so on.”The presence of Arab MKs and other Arab leaders at the earlier hearing enhanced Salah’s claim for leadership of Arab citizens of Israel, Rubin, who wrote an in depth study of the Islamic Movement last year for the Brookings Institution, had said.Netanyahu, government officials, and others in the media have been pointing their fingers at the Islamic Movement in Israel’s northern branch, connecting it to the recent wave of violence.Earlier this month, a representative of the Shin Bet (Israel Security Agency) told the cabinet the Islamic Movement and Hamas were chiefly responsible for the incitement that has led to the upsurge in terrorism, and that both groups reject Israel’s existence.In an interview on Army Radio this month, the head of the police operations, Asst.-Ch. Aharon Aksol, said: “These are not spontaneous events, the Northern Branch is a guiding hand.”Also this month, Interior Minister Silvan Shalom issued a one-month travel ban on Salah, saying his leaving Israel could pose a significant threat to the security of Israel. The travel ban, which expires November 11, also applies to his deputy.Ben Hartman and Herb Keinon contributed to this report.