New invention by Technion engineers still not perfect but are have made considerable progress. 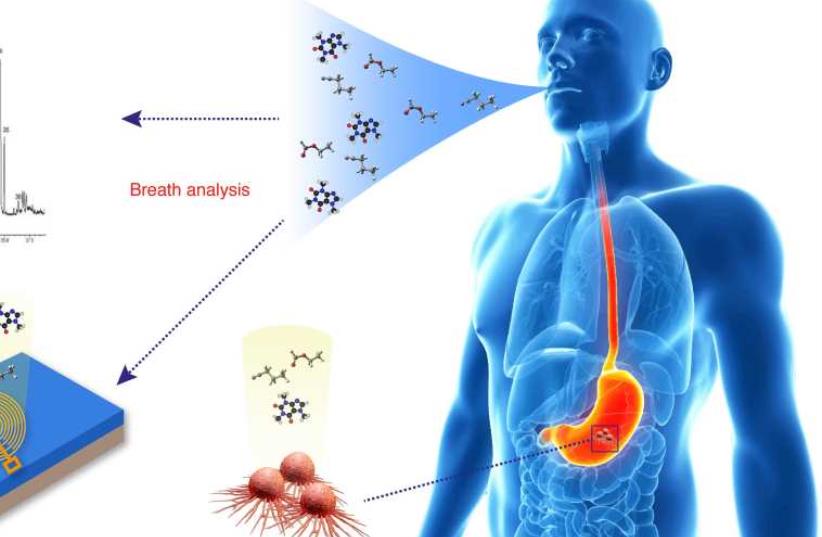 Cancer detecting breath test
(photo credit: TECHNION)
Advertisement
The successful use of nanosensors to examine volatile organic chemicals in the breath for the early detection of stomach cancer -- developed by Technion-Israel Institute of Technology Prof. Hossam Haick -- has just been published in the journal ITAL Gut END ITAL. Until now, Haick - a 40-year-old Israeli-Arab scientist and engineer - has used his invention of the “electronic nose" (Na-Nose) to sniff out lung, breast, colorectal and prostate cancers.His study showed that the technology is as effective, cheaper and faster than the standard invasive technique to detect molecular changes involved in cancer -- called gas chromatography mass spectrometry (GCMS). But the scientist said more work is still needed until it becomes the standard tool for early detection of the tumor. The breath test makes it possible to screen people at high risk for stomach cancer, such as high alcohol intake, a diet high in salty and smoked foods and low in vegetables and fruits, a family history of the tumor and smoking. The researchers studied breath samples from 484 patients, 99 of them having been diagnosed by invasive methods with actual gastric cancer. The rest of them were either healthy subjects used as a control group or patients called in when gastroenterologists found they had some worrisome signs of pre-cancer that might develop into malignant tumors in the stomach. But the accuracy was not 100 percent; some patients were said after the breath test to be at high risk, but were not when examined invasively.Gastric cancer is one of the most deadly. It is conventionally diagnosed with an endoscope threaded into the stomach via the esophagus, requiring the patient to fast for hours and get an injection to prevent pain. If a malignancy is detected, especially at a later stage, patients need radiation, chemotherapy and full or partial surgical removal of the stomach. Many victims die only because they have not been diagnosed in time.The invention of the Haick team -- in cooperation with a research team from Latvia -- was used to detect premalignant lesions -- changes before the cells become malignant. The patients were tested for ITAL Helicobacter pylori END ITAL bacteria using GCMS that measures organic chemicals in the breath. But this technique is not practical for early and rapid diagnosis because it is very expensive, requires the know how of top experts and a long time for processing.The samples were also tested with Haick’s nanoarray analysis and gave an answer based on the presence of eight specific components out of a total of 130 volatile organic compounds in the breath.  According to the journal article, the Na-Nose was able to differentiate among different stages from precancerous to cancerous when growths were detected; the diagnosis was also independent of gender, smoking history and use of alcohol and anti-acids.To improve assessment of the technology, a major study with thousands of European patients with precancerous or cancerous conditions has been launched.