The trip was organized as part of the “Grand Challenges Israel” program, funded by the Foreign Ministry and Economy and Industry Ministry. 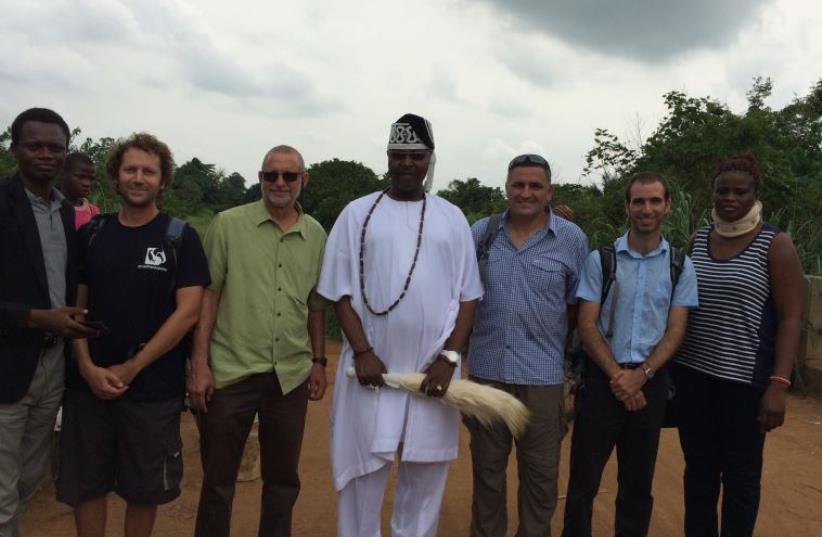 Researchers meet with the chief from an area of western Nigeria where the incidence of Schistosomiasis is high
(photo credit: ELI BEN BOHER)
Advertisement
Most people only see prawns swimming in a fishtank or cooked up at mysterious buffets. A research team from Ben-Gurion University, however, is trying to find ways to use the crustaceans to fight disease in Africa as well.For the past week, a small team of researchers, as well as an official from shipping company Tiran, worked with researchers from Ibadan University to study ways to use prawns to feed on a snail that proliferates in streams in the region, carrying a dangerous parasite.Heading the group was professor Amir Sagi from the BGU's Life Sciences Department and the National Institute for Biotechnology in the Negev  told The Jerusalem Post on Monday that the research focused on finding the best way to use prawns to eat the snails, which host a parasitic worm that causes Schistosomiasis (Bilharzia). According to the CDS, the disease damages internal organs and affects 200 million people worldwide, coming only second to Malaria in terms of the devastation it causes. He noted that this method, using all-male prawns, is already commercially available in Vietnam and China. The aim with this study was to find a way to adapt the method to the Africa climate.The trip was organized as part of the “Grand Challenges Israel” program, funded by the Foreign Ministry and Economy and Industry Ministry. The program helps facilitate collaborations between Israeli academia, business and African partners.Part of the money they were granted also went toward research, lead by Sagi, which grabbed worldwide attention last October by developing a method, patented by the university and licensed to Tiran Group, of producing all-male prawn offspring. It was hailed as having the potential to increase world food supply since males grow to be about 60% larger than females. This could have implications in quashing the parasitic threat, since the larger prawns would eat more snails.Sagi hopes that the project will eventually be developed into a larger field study and demonstrate “the use of biocontrol to help [efforts to] eradicate the disease” while also helping the existing local aquaculture industry.