Germany is using the drone as part of its role in UN peacekeeping force. 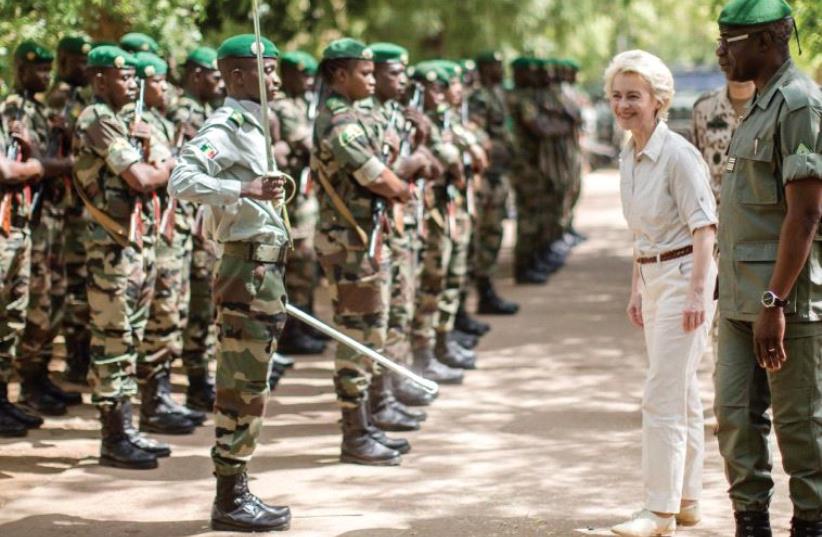 GERMAN DEFENSE MINISTER Ursula von der Leyen is received with a guard of honor of Malian soldiers as she visits the EU training mission in Koulikoro, Mali, in April.
(photo credit: REUTERS)
Advertisement
Germany has successfully carried out its first successful operational mission in Mali using the Israeli-made Heron 1 unmanned aerial vehicle (UAV).The mission took place on November 1 and lasted five hours and 40 minutes.As part of its role in the UN peacekeeping mission in Mali, Germany signed a $100 million deal with Airbus Defense and Space to lease 3 Israeli- made Heron drones in July.“The first flight is an important step to obtain the declaration of full operational capability,” Airbus said in a statement.Speaking to The Jerusalem Post, a spokeswoman for Israel’s Aerospace Industries said the contract for the Heron 1 UAVs will last from November to February 2018, when Germany plans to lease the larger and more advanced Heron TP UAVs in a $650m. contract.The Heron TPs are IAI’s most advanced UAVs.Germany is currently in charge of the intelligence unit in Mali, taking over from the Netherlands in July. It operates the UAVs to secure the perimeter of the United Nations MINUSMA (Multidimensional Integrated Stabilization Mission in Mali) as well as to obtain intelligence concerning various terrorist groups in the northeastern Gao region.French and Malian forces drove al-Qaida in the Islamic Maghreb and other terrorist groups out of Timbuktu over three years ago, leading the Islamists to establish a base of operations in the vast arid north of the country bordering Mauritania and Algeria.This year has been deadly for MINUSMA, with over 30 troops killed, more than in any other UN peacekeeping mission.The Heron 1 is a medium-altitude and long-term endurance craft. Equipped with satellite data-link and electro-optical infrared sensors, it is able to not only provide reconnaissance to ground forces, but is also able to track down explosives from the air.And while the upkeep of the UAVs will be done by Airbus, the analysis of the intelligence gathered by the Heron 1 will be done by German forces. In their statement, Airbus said all “reconnaissance results are made available to the joint evaluation center of the MINUSMA Mission, contributing to increased security for all employees involved.”Other Heron I systems are already in use in Mali, including those operated by the French Air Force, which has been flying the Harfang, a variant of the Heron 1, since the beginning of the UN mission in January 2013.MINUSMA has also signed a contract with Thales UK to operate Israeli-made Elbit Hermes 900s, which has a maximum payload of 350 kg. and is able to stay airborne for 36 hours.The Hermes was used extensively during Operation Protective Edge in Gaza in 2014 as well as during the 2015 World Cup in Brazil.And while the Israeli-made UAVs in Mali will be used solely for surveillance and intelligence gathering, a video released in April reportedly showed the Israeli-made Herop suicide UAV hitting a bus carrying Armenian soldiers in the conflict ridden Nagorno-Karabakh region, killing seven. The Azerbaijan army was using the UAV against the Armenians last spring during a few weeks of intense fighting.According to foreign media reports, Israel is considered a leading exporter of drones, with IAI and Elbit selling UAVs to countries including Chile, Colombia, France, Germany, India, Mexico and Singapore.A spokeswoman for IAI told the Post the company has more than 30 clients around the globe, including Australia and South Korea.