Apart from a replica of the Madaba Map, nine other mosaics will illustrate the stories of people who lived and worked there during Byzantine times. 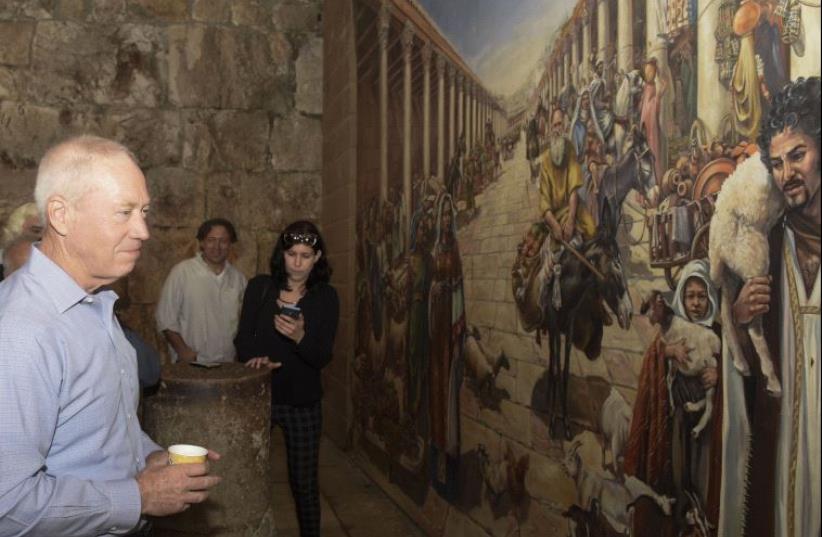 Housing and Construction Minister Yoav Galant (center) tours the Cardo section of the Jewish Quarter on Wednesday morning.
(photo credit: AVI HAYUN)
More than 1,500 years after Jewish life flourished in the Cardo section of the Old City’s Jewish Quarter, renderings of ancient markets mounted on mosaics, discovery of a Byzantine arch and reconstruction of a bombed-out synagogue are breathing new life into the historically rich area.The Cardo, which stretches north to south from Damascus Gate to David Street, dates to the sixth century CE and is depicted on the Madaba Map, a part of a floor mosaic discovered in 1884 in a Byzantine church in Madaba, Jordan.The beautification project will celebrate the 50th anniversary of the reunification of Jerusalem.The endeavor was initiated several months ago, but it was only made officially public on Wednesday.The revitalization is being spearheaded by the Company for the Reconstruction and Development of the Jewish Quarter and the Tourism Ministry, with aid from Jerusalem Affairs Minister Ze’ev Elkin, the Jerusalem Foundation, the Jerusalem Municipality and the Israel Antiquities Authority.To mark the capital’s half-century milestone, Pini Refael, manager of education and tours for the reconstruction and development company, said it was decided to focus on the area’s historic culture and art.Apart from a replica of the Madaba Map, nine other mosaics will illustrate the stories of people who lived and worked there during Byzantine times.“We are going to renew the Cardo by creating special mosaics that are going to show people what life was like here 1,500 years ago,” Refael said, speaking near two recently completed mosaics.“We’re also going to recreate nine shops to illustrate that time.”Refael said the shops will match mosaics of ancient jewelry, fabric, fruit, vegetable, animal and ceramics stores that once lined the ancient street.“All the mosaics will be a replica of this period of life,” he said. “And the shops will only sell things from that time.”The project commenced three months ago and is scheduled to be completed by mid-2017. The mosaics featured in the Cardo are part of a far more expansive project to build many more mosaics throughout the quarter, Refael said.Renowned Israeli artist David Harel was present on Wednesday morning, along with Construction Minister Yoav Galant, to reveal the two completed mosaics. The colorful pieces depict ancient fabric and fruit and vegetable shops and are based on Harel’s oil paintings.Hemeticulously researched the era he would be reproducing and later submitted the paintings to artists at Elon Mossaic, at Kibbutz Elon in the North, to reconstruct them with stones.“I studied all the academic research from that time and got the exact details,” Harel said, noting that it took five months to complete seven of the nine portraits.“I make a drawing, and it then takes about six weeks to complete each painting. Then I bring them to Elon Mosaic. I am painting many different shops – from spice, jewelry and food to ceramics – everything as it was 1,500 years ago.”“I am very proud of this project because it is from our history, and my work will live for thousands of years,” he said.Galant emphasized the Cardo’s historic importance and said the mosaics – along with a nearby, recently excavated Byzantine arch – will be seen by millions of tourists who walk through the area every year.“This is a great [opportunity] to show all visitors – tourists, Jews, non-Israelis – what was happening here 2,000 years ago, how Jews lived, how they made their living in this area and to describe the [ancient] open market,” he said.Galant, a former commander of the IDF’s Southern Command, discussed reconstruction of the nearby Tiferet Yisrael Synagogue, which he called long overdue. The synagogue is now being actively resurrected.“This synagogue, together with the Hurva Synagogue, were destroyed by the Jordanians in one of the crucial battles in 1948, just days after the establishment of the Jewish state, and it took us another 19 years before we arrived back and recaptured this area,” he said.“We have to make sure that all the Jewish symbols – all the synagogues, all the Jewish traditions and whatever symbolized Jewish life in Jerusalem – will be emphasized and will be greater than it was.”“It is very simple,” Galant said.“We cannot allow, under a free and democratic Israeli state – 50 years after we arrived back to the Jewish Quarter to the Kotel and Jerusalem – that such destruction will remain a scar on the life and prestige of the Jewish Quarter.”When asked his opinion of last month’s UNRWA vote ignoring Jewish ties to the Temple Mount, Galant expressed palpable dismay.“Even if you repeat a lie a thousand times, it doesn’t make it true,” he said. “I condemn this effort to try to twist history for political reasons. It won’t work – not on the political side, and definitely not on the historical side.”