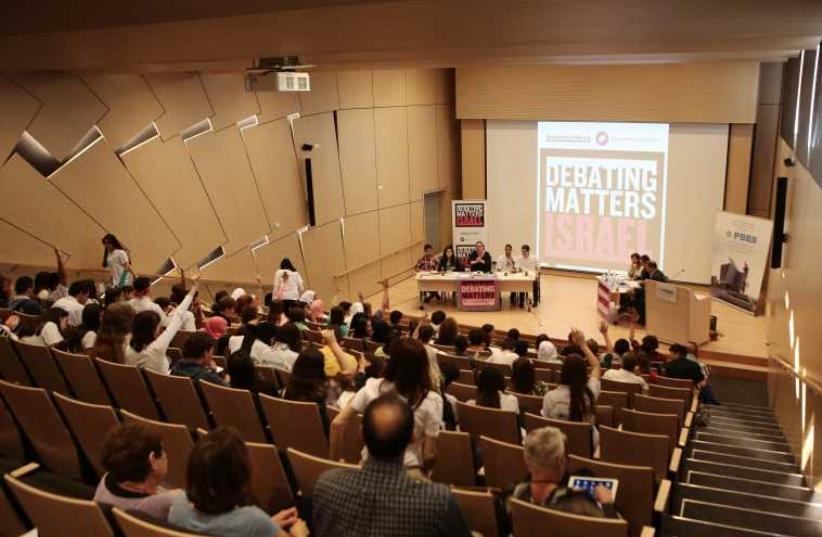 High school students from both the Jewish and Arab-Israeli sectors participate in the Debating Matters tournament
(photo credit: ODED KARNI)
Advertisement
Or Katz and Maayan Amid and their teammates from the Reali Haifa school, take the trophy, after dozens of high school students from both the Jewish and Arab-Israeli sectors came together Tuesday for a day-long debate tournament, run by the Institute of Ideas Debating Matters Competition, a London based organization that has recently started its debate program in Israel, in partnership with the Anglo-Israel Association.The competition, held in English, was the culmination of months of preparation by the students at the eight participating schools. This tournament is one of the only English-language debate tournament for high school students in Israel.Ohad Davidow, teacher and coach of the winning team, who also serves as the Chairman of the university level Israeli Debate League, says "I'm very proud of the effort and force of will that my team has shown today and proven that they believe that words and ideas can make a difference for the better."The Hebrew language national debating championships, run by the Yoni Cohen-Idov (YCI) Center for Debate and Rhetoric in partnership with the Education Ministry and the Citizen's Empowerment Center in Israel, which includes 65 schools from across the country, recently finished its annual tournament with a final debate on April 29th. The YCI Center for Debate and Rhetoric also runs regional English language debate tournaments.The Debating Matters tournament utilizes a unique format of debating, allowing for adjudicators and audience members to pose questions to the debaters."This competition is great because it introduces a new format and makes students thoroughly research controversial issues," said Alon Cohen, CEO of the YCI Center for Debate and Rhetoric and an adjudicator at the tournament, "But most significant is putting debate on the proper stage, giving it the respect it deserves. This happens when you bring very distinguished judges, when students really have to defend their arguments and eventually make this a very constructive and pleasant experience for the students."The topics at the tournament ranged from discussing the impact of megacities on the developing world to the benefits of space exploration to the justifications for animal experimentation. The motion for the final round discussed the rejuvenation of political protests on social media.Participating schools included the Anglican International School Jerusalem, the Yachad Modi'in school, known for being the largest school in Israel to incorporate religious and secular students, and three schools from the World ORT Kadima Mada and YOUniversity Centers network, among others.Haya Awad, from the ORT Kadima Mada YOUniversity Center in Beit Chanina said that she enjoyed learning debate and felt it gave her a way to better hear and express opinions. "It also increases knowledge," she said, referring to the topics she had researched along with her classmates over the past few months. The adjudicators of the final debate were Dr. Ayelet Blcher-Prigat, senior lectuerer at Sha'arei Misphat Law School, Pamela Dow, director of operations at Tech City UK, and Hebrew University of Jerusalem Prof. David Greenberg, director of community at the Mental Health Center of North Jerusalem, Herzog Hospital.