As Ethiopian olim trickle to Israel, many wonder when's their turn

Many families are split with only some members approved for aliya. 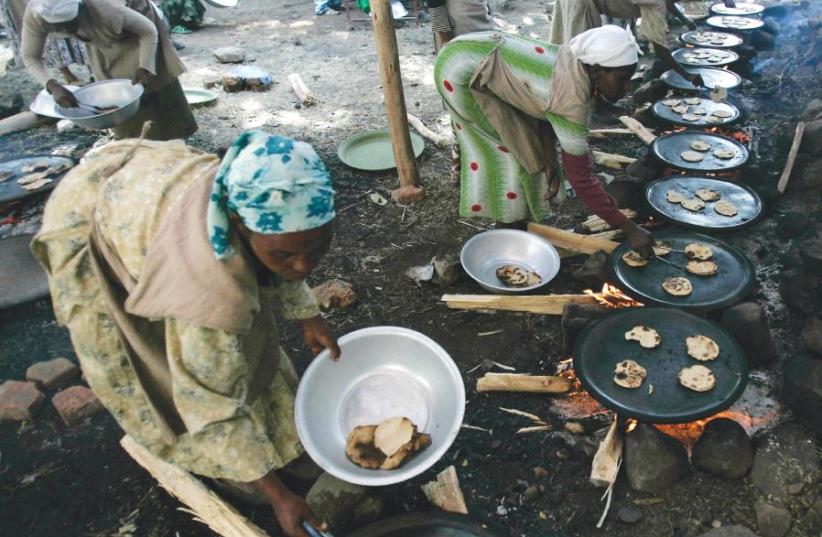 women prepare matza ahead of Passover in Gondor in 2007
(photo credit: REUTERS)
When Sorafel Alamow, 22, immigrated to Israel from Ethiopia with his father and sister, he never dreamed that he would have to wait more than a decade for his five older siblings to join them.Jewish Agency representatives in Gondar told his family more than 10 years ago that his siblings who were over the age of 18 would join them in a month or so, Alamow, who lives in Haifa, told The Jerusalem Post on Monday.“I’m still waiting for them [Jewish Agency officials] to call them,” Alamow said. Since his aliya, two of those siblings have died of serious illnesses.He said that every time he speaks to officials, “they have a new excuse” about why the aliya of his siblings is being delayed but always tell him it is being handled.“It will happen, it’s just a matter of time, but in the meantime we are losing more people,” he said.Hen Asmamo, who lives in Holon, has been waiting 17 years for her grandmother to join her in Israel. Asmamo said that life goes on in Ethiopia and the families of those awaiting aliya naturally grow. “And then they are surprised there are more and they complain that it never ends,” she told the Post.Neither Asmamo nor Alamow has been sitting idly waiting; both are active in a campaign called the “Struggle for the Aliya of Ethiopian Jews,” which seeks to put pressure on the government to bring the remaining members of the Ethiopian Jewish communities to Israel. The campaign was launched following a declaration of the “end of Ethiopian aliya” three years ago that left many Falash Mura families divided.Falash Mura is the name given to those of the Beta Israel community in Ethiopia and Eritrea who – under compulsion and pressure from missionaries – converted to Christianity during the 19th and 20th centuries.Since their ancestors converted to another religion, the Falash Mura are not covered by the Law of Return, which grants the right to immigrate and gain citizenship to anyone with a Jewish grandparent.The Falash Mura are brought to Israel under the Law of Entry and are required to convert to Judaism once in Israel. They receive the same absorption benefits granted to immigrants who come under the Law of Return.Between 2003 and 2010, a cabinet decision only allowed Ethiopians who are Jewish on their mother’s side to make aliya.Slamming the fact that the Ethiopians were “taken out of the Law of Return,” MK Avraham Neguise (Likud) has previously charged that Ethiopians suffered from “a policy of discrimination,” noting that the same conditions were not applied to immigrants from other countries, such as the former Soviet Union.Neguise made aliya from Ethiopia in 1985 and has been instrumental in the cause of the Falash Mura.Two years ago, he and MK David Amsalem (Likud) refused to vote with the coalition until a November 2015 cabinet decision to resume Ethiopian aliya was implemented, after being put on hold for budgetary reasons.The new cabinet decision allows anyone of Zera Yisrael, literally “the seed of Israel,” to make aliya – as long as they meet various other criteria. This means that their Jewish roots are no longer restricted to one’s mother’s side for the purpose of eligibility to immigrate.Asmamo was five years old when she moved to Israel from Ethiopia, but is still waiting for the day when the government allows her grandmother, Yezebalm Ayleo, to join her.Asmamo made aliya with her mother and three of her siblings, but has been told that her mother’s mother is not Jewish and thus has been prevented from making aliya. “They say she has a non-Jewish side; what can I do with that?” Asmamo said in a telephone interview with the Post. “If my mother is here, and all her siblings are here, how was my grandmother left there?” 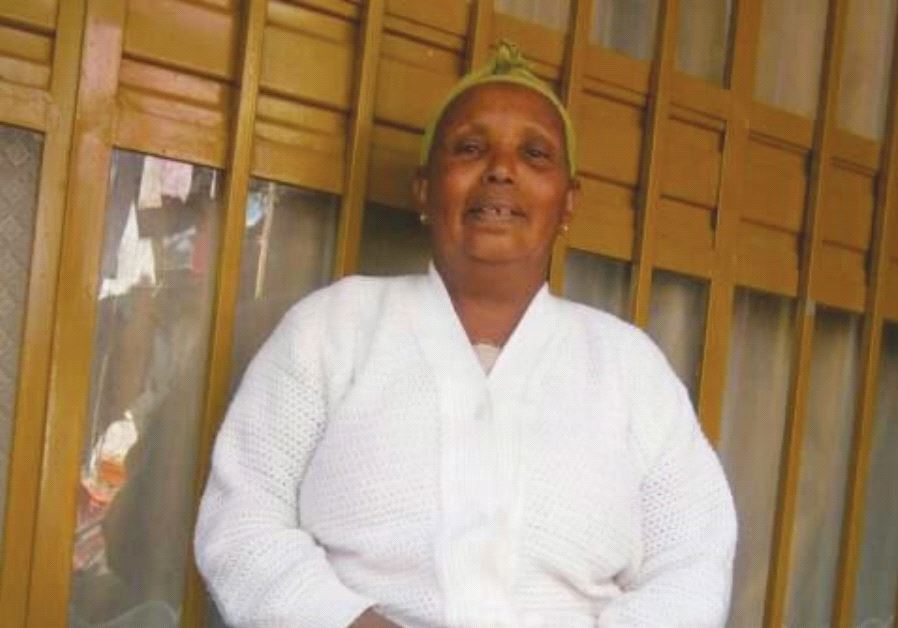 Yezebalm Ayleo waits in Addis Ababa for permission to join her family in Israel (credit: courtesy)Ayleo is waiting in the Ethiopian capital, Addis Ababa, while Alamow’s family is waiting in and around Gondar city. Both have been to visit their families in Ethiopia, and Alamow said life in Gondar “is not so easy”; they still feel effects of the recent political violence there.According to the two latest cabinet decision on the issue, the first made in November 2015 and the second in August 2016, some 9,000 Falash Mura may be brought to Israel by the end of 2020, starting with 1,300 by the end of 2017.Sabine Hadad, spokeswoman for the Interior Ministry’s Population Registry, stressed that the number 9,000 is only a potential number, and that of those 9,000 the government will only allow into Israel those who meet the Interior Ministry’s criteria.On Tuesday evening, 50 olim arrived from Ethiopia, following, 72 who came last week. Groups of this size are expected to keep trickling in until November, the deadline to bring the first 1,300.“The question is what happens after those 1,300,” said Neguise.“We have started discussing it with the Finance Ministry in order to allocate a budget to continue to bring them all to Israel,” the MK told the Post. He said the matter is under discussion and the government’s position is not yet clear.“I am hearing mixed attitudes on the government’s side; some people say we have to continue bringing them as quickly as possible... and others say we have to wait for the 2019 budget,” he explained.“One thing is clear; we will not give up,” Neguise said.The Finance Ministry told the Post that the budget was not an obstacle. 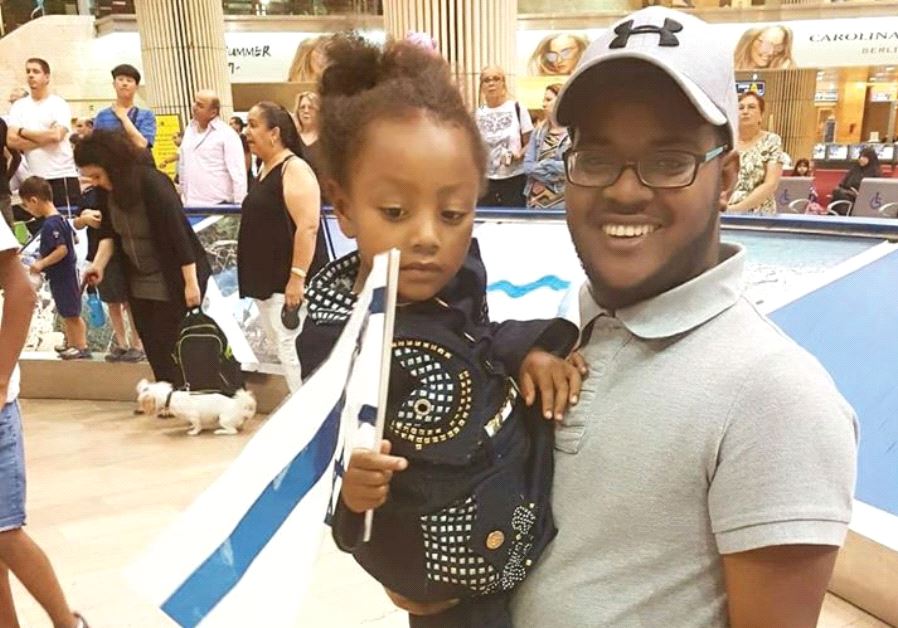 Ayan Ehila, from Rishon Lezion, meets his niece at Ben-Gurion Airport (credit: Shira Frishman)Ayan Ehila, from Rishon Lezion, was among those who greeted their relatives among the most recent group of olim. He posted to Facebook that his dream had come true. “To get to this day I went through so much in the past four years. Thank God that I get to see my brother and his children here with me.... and of course there are more families who are waiting for the reunification of their families and we have to fight until the end.”Asmamo said, “It’s hard to see others coming and be wondering why does my grandmother remain there. It breaks my heart that have I been fighting for four years. People in the Knesset are playing with our feelings, our families, our lives.”Asmamo is getting married in December and dreams that her grandmother will be there. She was practically raised by her grandmother during the first few years of her life and speaks to her every day.“It really hurts to talk to her, because she doesn’t understand why she can’t reunite with us and I have no answers for her,” Asmamo said. Her grandmother does not believe she will ever see Jerusalem.Bekalu Damte, from Petah Tikva, is another of the many Ethiopians waiting for the reunification of his family. He came to Israel in 2007 with his parents and six of his siblings. Two other siblings are still waiting in Gondar.One of the requirements of the most recent cabinet decision is that Ethiopian immigrants must have been waiting for aliya in the Jewish communities in Gondar or Addis Ababa since January 2, 2010, at the latest. Having uprooted their lives to then wait for years for an elusive aliya date, many feel that they are in a state of limbo.“It holds them back from advancing in their careers because they are just waiting.... they have been waiting for 17 years,” Damte said.It also places a financial burden on their family members in Israel, many of whom send a significant portion of their salaries to their relatives in Ethiopia.On top of that, antisemitism is another demon those left in their native country are left to battle. Asmamo told the Post that locals pushed her uncle, her grandmother’s son, from the top of a building to his death, because of his faith.Another member of the community recently interviewed on an Israeli radio station also spoke of an antisemitic attack, one in which her relative was wounded.Asmamo says that antisemitism is not rare in Ethiopia, and that the Falash Mura are subjected to taunts such as “What are you doing here, Falash? You shouldn’t be here.”The Interior Ministry’s Population Registry did not answer the Post’s inquiry regarding the interviewees by press time, and Amos Arbel – who heads the Registration and Status Division – said they would not discuss individual cases with the press.The Post also contacted the Immigration and Absorption Ministry for comment, which said the Prime Minister’s Office has the final say in the matter. The Prime Minister’s Office passed the buck to the Interior Ministry.

Tags ethiopian jews in israel
Subscribe for our daily newsletter