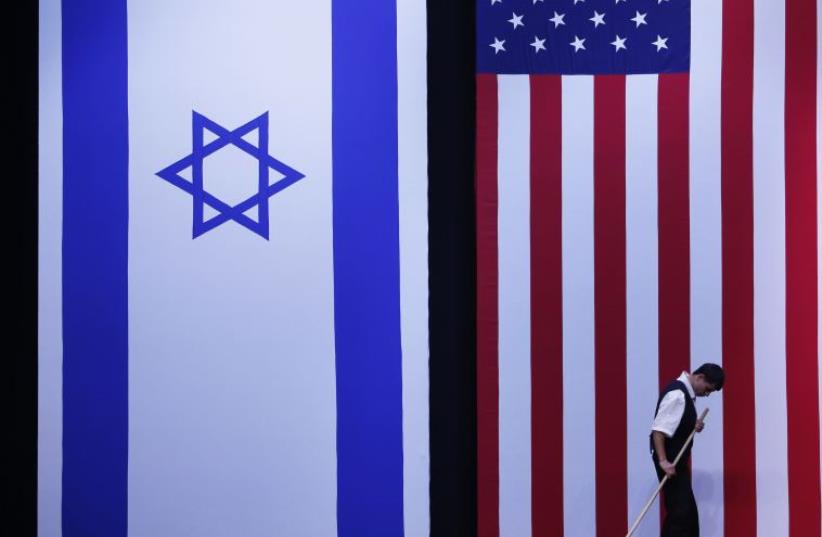 A worker cleans the stage near Israeli and American flags
(photo credit: REUTERS)
Advertisement
It’s a demand that has been made of the Palestinians by various Israeli leaders in the past, but an unprecedented Knesset-congressional joint declaration issued on Wednesday called on the US administration to demand that the Palestinians recognize the State of Israel as the national homeland of the Jewish people as a precondition to future talks.The declaration, signed by members of the congressional Israel Victory Caucus and the Knesset Israel Victory Caucus, declares that “the primary obstacle to ending the Palestinian-Israeli conflict is the near century of Palestinian rejectionism of the right of self-determination for the Jewish People”, and that, “only Palestinian acknowledgment of the Jewish People’s historic connection to the Land of Israel, and acceptance of Israel as a Jewish and democratic state, will end the conflict.”The Israel Victory Project is an initiative of the Philadelphia- based Middle East Forum, whose stated aim is to shift the paradigm to end the Israeli-Palestinian conflict by declaring Israeli victory.The declaration was signed during a visit to Washington and New York by co-chairman of the Knesset Caucus Oded Forer (Yisrael Beytenu) and caucus member Avraham Neguise (Likud). The Israeli lawmakers met with their counterparts in the congressional caucus, from both sides of the aisle, as well as other senior US decision makers and opinion shapers, and Jewish and Christian leaders.“Every attempt at negotiations with the Palestinians without demanding that they recognize Israel as the national homeland of the Jewish people will fail,” Forer said. “Together with members of Congress from both parties, we call on the American administration to demand from the Palestinians to recognize the State of Israel as the national homeland of the Jewish people as a precondition to future talks.There can be no negotiations on our legitimate right to self-determination.”“When [PA President] Mahmoud Abbas tries to sue the British government for the Balfour Declaration on its 100th anniversary it is obvious he is not interested in peace. If he intends to continue fighting we will defeat him again. Without victory there can be no resolution to the conflict,” Forer continued.“The central message that we have brought to the US is that the Palestinians need to move from rejectionism to recognition… [We] are delighted at the support we have received from our friends in Congress, both Republicans and Democrats, and we hope this is a message that will be taken on board by the Trump administration in any efforts or initiatives it pushes forward in the months ahead,” said Neguise.The congressional caucus is comprised of over 30 members of Congress from both parties and is co-chaired by Representatives Ron DeSantis (R-FL), Juan Vargas (D-CA) and Bill Johnson (R-OH). The Israeli caucus includes 16 Knesset members from most of the mainstream Zionist parties and is co-chaired, along with MK Forer, by Yaakov Perry (Yesh Atid).“It has been an honor to meet with the Israeli members of the (Knesset) Israel Victory Caucus this week and discuss the cherished friendship between our two nations,” Rep. DeSantis said.“We agree that the greatest obstacle to peace is the refusal of Palestinians to acknowledge that Israel is the legitimate national home of the Jewish People.”“I’m looking forward to working with our allies in the Knesset to advance the idea of an Israeli victory as an alternative approach to the Israeli-Palestinian conflict – one where Israel stops making unnecessary concessions, and instead the Palestinians concede their goal of destroying Israel and accept that the State of Israel is here to stay,” Representative Johnson said.“There can be no progress made towards peace until the Palestinians accept that significant but simple concept.”The two caucuses were formed with the support of the Middle East Forum, led by Daniel Pipes, who launched the Israel Victory Project earlier this year.“The Israel Victory Project is building political and intellectual support eventually to replace the current ‘peace process’ paradigm with one that will work better for both Israelis and Palestinians,” Pipes said