'Breaking News: My house is on fire'

"My house is slowly burning, and if it continues this way, not even a memory will be left," Ma'ariv's Yonatan Halali said during a live broadcast Thursday. 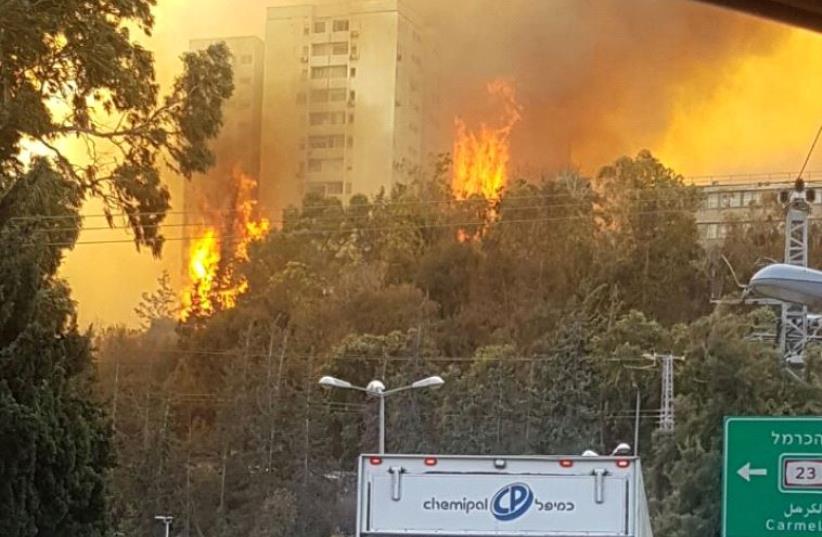 Buildings ablaze in Haifa
(photo credit: AVSHALOM SASSONI)
Advertisement
A reporter with The Jerusalem Post's sister publication Ma'ariv on Thursday became one of a number of victims affected by fires rampaging throughout Israel, after his home was reportedly damaged in a blaze. Speaking live with broadcaster Gabi Gazit on 103 FM radio, Yonatan Halali, who was providing live coverage of the fire near his home in the North, suddenly stopped the broadcast and announced: "Friends, I cannot speak now, my house is burning, goodbye."Rattled by the statement, Gazit asked the broadcaster to clarify. "What? Your house is burning?""Bye, bye," was Halali's only reply."I'm shocked," Gazit said after the reporter ended the conversation. "Yoni was supposed to report to us from the fire in Haifa and said he could not report that his house is burning," Gazit added, using Halali's nickname. Shortly thereafter, Halali returned back to the broadcast and provided listener with an update."The fire reached the Ramot Safir, a distance of 500 meters as the crow flies from my house," the reporter told Gazit. "It started when I smelled smoke from my (daughter's) room, it was the only room with the window open. The curtain caught fire - I stuck my head to see and I saw the fire."Ramot Safir is located in the mountains near the northern city of HaifaHalali continued, reporting that it remains unclear the total extent of damage the fire inflicted on his home. "I'm standing in front of the house, 20 meters away, and it's simply burned. Firefighters are spraying water now, but it seems like a drop in the ocean.""I can not tell you exactly the damage but my neighbor above me, his balcony is completely burned," he added."My house is slowly burning, and if it continues this way, not even a memory will be left," Halali concluded.