Maharashtra has an estimated population of 116 million, and is the world’s second-most populous sub-national entity. 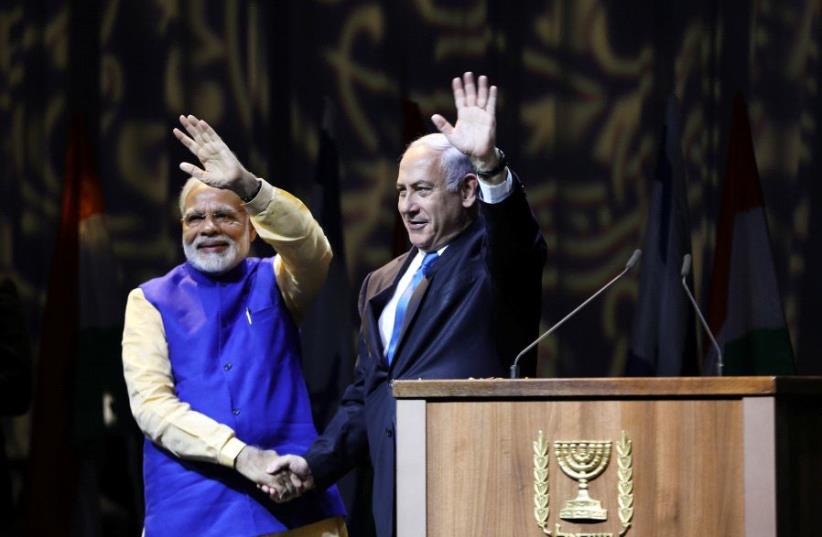 Indian Prime Minister Narendra Modi (L) and Israeli Prime Minister Benjamin Netanyahu shake hands as they wave to the crowd during a reception for the Indian community in Israel, in Tel Aviv, Israel July 5, 2017.
(photo credit: REUTERS/AMMAR AWAD)
Advertisement
The city of Tel Aviv-Jaffa will export its digital resident card program to the west-central Indian state of Maharashtra.Coinciding with Prime Minister Narendra Modi’s visit to Israel, the Tel Aviv Municipality announced on Wednesday that it will expand its existing digitalization partnership with the Indian city of Thane, to the entire state of Maharashtra. In early March, Tel Aviv won a tender to bring its DigiTel digital resident card program to Thane, located about 25 km. northeast of Mumbai.Maharashtra has an estimated population of 116 million, and is the world’s second-most populous subnational entity.“DigiTel is now recognized internationally as an innovative use of technology and knowledge in improving services to residents and easing the cost of living in the city,” said Tel Aviv Mayor Ron Huldai. “This is further proof that Tel Aviv-Jaffa is a city that is open to the world, working to transfer knowledge, exchange opinions and ideas and develop methods of learning among cities.”As part of the existing contract with Thane, Tel Aviv is working with Mumbai-based partners Foxberry Technologies and AP GLOBALE to create a digital network that will enable direct and focused contact with the city’s residents. To do so, Tel Aviv is transferring knowledge for adaption in Thane’s technological system. In return, Thane will reimburse expenses for the development of digital services in Israel.“The project in the city of Thane marks the beginning of an era in which the Tel Aviv-Jaffa Municipality, as a global city, is exporting urban knowledge that contributes to the development and advancement of cities around the world,” said Zohar Sharon, chief knowledge officer for the Tel Aviv-Jaffa Municipality.In the coming year, Tel Aviv will help introduce that model in other cities throughout Maharashtra.The original DigiTel program is now serving some 160,000 residents of Tel Aviv, providing them with a variety of information via email, SMS and a website tailored to suit their individual needs – based on resident location, interests, marital status and more, according to the city.The program aims to help reduce the cost of living for users, by providing access to a number of discounted activities and targeted services. The DigiTel platform also includes a smartphone app, free Wi-Fi throughout the city and a geographic information system.“DigiTel’s advantage lies in the transfer of targeted information according to segmentation, which enables every person to receive only what interests him or her,” said Gidi Shmerling, the spokesman of the Tel Aviv-Jaffa Municipality. “Thus, the club serves as a type of matchmaker between cultural institutions in the city and residents who enjoy access to events and activities at reduced prices.”