ZAE signed the deal with China's Bustil to design 7,000 swap stations for Nanjing, the Capital of Jiangsu Province in Eastern China; If all goes well, taxis may be added to the mix as well. 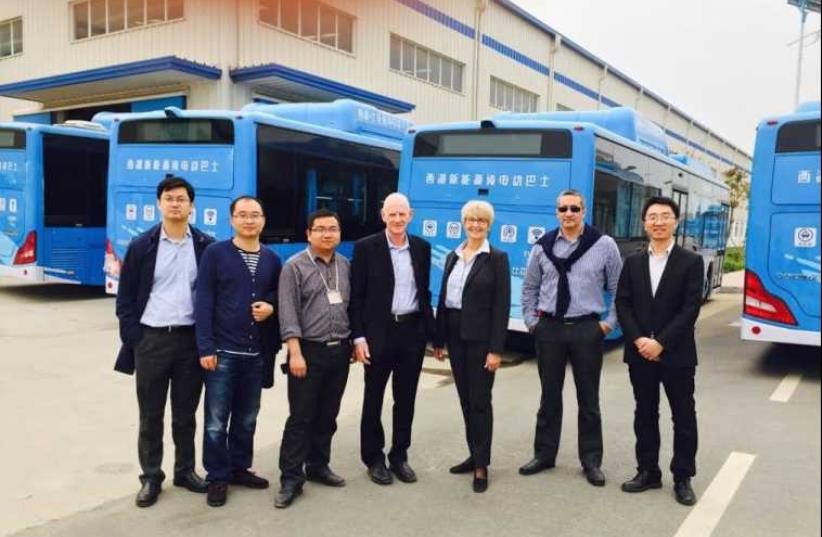 Dr. Amir Ziv-Av and Ziva Patir (center) pay a visit to the BYD company's factory in Nanjing in the center
(photo credit: Courtesy)
Ziv Av Engineering, a company that helped design automated battery-swapping stations for Better Place, has been hired to install similar infrastructure for electric buses in Nanjing, China.Better Place, which went bankrupt two years ago, had been an international media sensation for its vision of pushing the world toward electric vehicles. One of its innovations was the idea to quickly swap car batteries at stations instead of requiring owners to charge them.The battery-swap technology helped make lengthier trips possible for vehicles that would otherwise require recharging after traveling certain distances.When Better Place cars eventually went on sale, however, they had difficulty finding buyers, and the company went under shortly thereafter.ZAE signed the deal with China’s Bustil to design 7,000 swap stations for Nanjing, capital of Jiangsu province in eastern China, whose population is roughly on par with that of Israel. Bustil, which operates swap stations in other Chinese cities, holds the franchise for charging and switching batteries on electric buses in Nanjing through its municipal authority.“The electric car is the future of the transportation industry,” said Ziv-Av, the company’s owner and chairman, “especially in an urban environment requiring green friendly solutions and the reduction of air pollution. I hope that the insights derived from the project in Nanjing are also used in other projects in China, Israel and all over the world “.The buses will offer a somewhat different challenge than the original car battery-swapping technology; each bus has seven to nine batteries, and ZAE will be responsible for both the swapping technology and transporting batteries between swapping stations and charging stations.If all goes well, taxis may be added to the mix as well. Israeli bus company Dan bought electric buses from the same Chinese manufacturer that supplies them to Nanjing, called BYD. The deal is part of the framework of an Economy Ministry- sponsored bilateral R&D program between Israel and Jiangsu.