IDF begins moving troops from across the military into new yet unnamed combat unit. 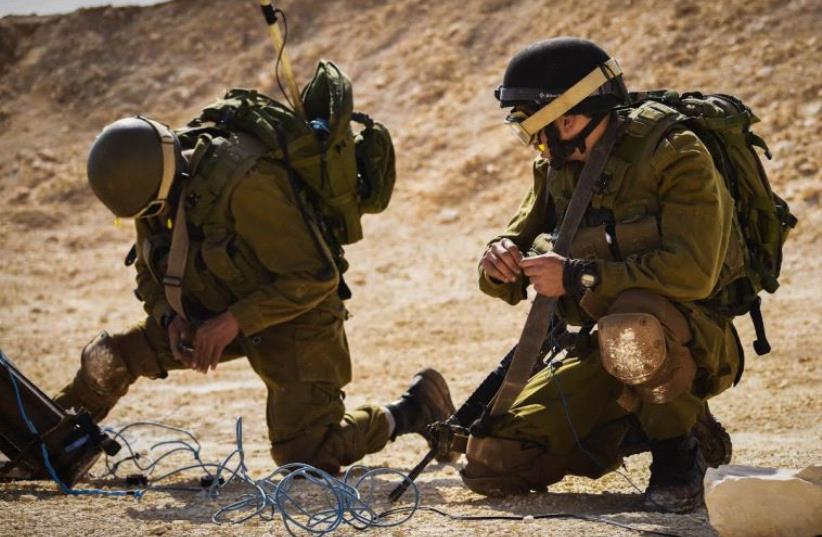 IDF Yahalom unit trains in Jordan valley
(photo credit: IDF SPOKESPERSON'S UNIT)
Advertisement
The IDF has started moving troops into a new multidimensional combat unit which will organically integrate the capabilities of soldiers and officers from various units across the military for a deadlier maneuvering force.The troops will come from units in the infantry, combat engineers, including troops from the Yahalom and Gadsar reconnaissance battalions, paratroopers, artillery, the Oketz canine unit, and the Duvdevan commando unit, as well as air force (including pilots) and field intelligence.Naval forces will not be integrated into the unit at this stage.The new unit, which has yet to be named, is part of the change in the military’s perspective to meet challenges posed by enemies. Its purpose will be to improve the lethality of IDF maneuvers in future wars by rapidly destroying more enemy assets as troops advance deep into enemy territory.The unit will be equipped with classified combat technologies, some of which are still being developed, as well as unmanned aerial vehicles for a variety of missions. It will also act as a testing ground for new combat techniques and tactics developed by the recently created Shiloah unit responsible for modernizing fighting methods and arms.The decision to establish the combat unit was made by Chief of Staff Lt.-Gen. Aviv Kochavi as part of the IDF’s multiyear plan, which is centered on making the military more innovative and deadlier in future conflicts.The unit will be commanded by Lt.-Col. Ayin, who previously commanded the Duvdevan commando unit, but whose promotion in rank was delayed for a year and half after a soldier in the unit was killed when a bullet was accidentally discharged by a soldier who had been playing with his gun.Over the course of the next year, the new unit will operate under Division 98 and will have several large-scale drills before it becomes operational. With no similar model to build off of, the new unit will be a prototype for similar units in the IDF in the future.The IDF’s new multiyear plan, which officially began on Wednesday and is dubbed Tnufa, was formed following a critical and comprehensive investigation into the IDF’s strengths and weaknesses which led the military to decide to update the operating concept and build a new one for the next decade.The military has changed its formulation of the operational concept of victory of the IDF, which will include new concepts and methods of warfare which have been adapted to the challenges of the urban battlefield saturated with enemy fire.In previous wars, troops could visualize the enemy in one clear location. Today’s enemy is decentralized and is harder to visualize. Enemies have become time-sensitive targets which challenge the IDF to strike them immediately upon being detected before they disappear again.Under the plan, the IDF will also spread capabilities to all the operational-end units (battalions and companies), in order to get all different branches to work together in maneuvering and defense, and to empower troops and commanders in the field. There will also be a digital transformation in the IDF, where all troops will be connected – from the pilot in the sky to the platoon commander on the ground.
In today’s modern battlefield, the ability to share information and maintain continuous communication between different forces is vital for the success of any mission.Despite the fact that Israel’s enemies are not interested in war, the IDF has “increased its pace of preparations” for confrontation, Kochavi told journalists in October.“On both the northern and southern fronts, the situation is tense and fragile, and can deteriorate into a confrontation,” he said.