Analysis: The winner from the Israel-Turkey détente - Hamas

Besides Hamas not being able to carry out military activity from Turkish soil, everything else stays the same. 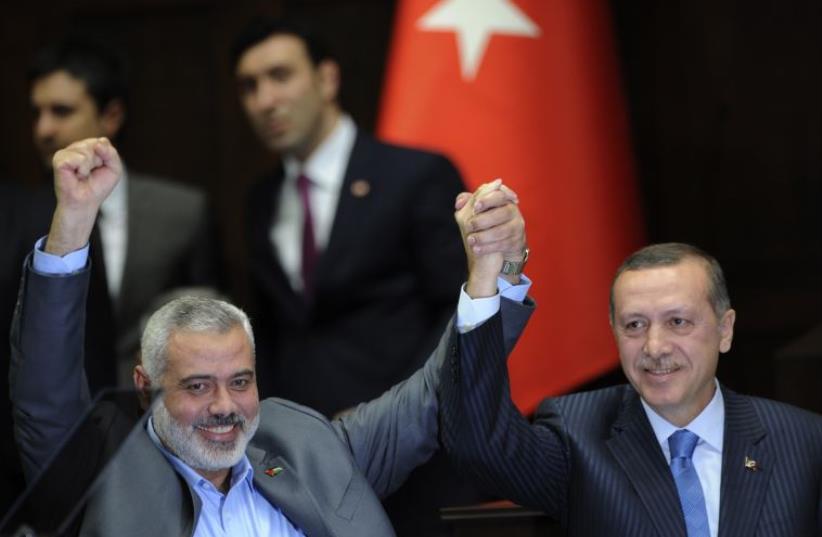 Turkey's President Recep Tayyip Erdogan (R) and Hamas leader Ismail Haniyeh seen in Ankara on January 3, 2012
(photo credit: REUTERS)
Advertisement
Hamas and Turkey come out as the winners in the upcoming deal if reports in the Israeli media are correct.Israel apparently has agreed to the presence of Hamas in Turkey as long as it does not involve itself directly in terrorist attacks against Israel, but limits itself to political and other supposedly nonviolent activity.However, the sanction of the presence and “political” activity of Hamas in a country with diplomatic ties with Israel undermines years of Israeli public relations against the terrorist group, which sought to identify Hamas with other Sunni groups such as al-Qaida and Islamic State.Prime Minister Benjamin Netanyahu equated Islamic State to Hamas in a speech to the UN in September 2014, saying some countries “evidently don’t understand that ISIS and Hamas are branches of the same poisonous tree.”“ISIS and Hamas share a fanatical creed, which they both seek to impose well beyond the territory under their control,” he said, going on to note that both groups call for the creation of a caliphate with global ambitions.But, if Hamas is Islamic State, why is Israel sanctioning its activity, even though not directly terrorism related, in a country with which it wants to normalize relations? Turkish media reported that President Recep Tayyip Erdogan met with Hamas leader Khaled Mashaal in Istanbul on Friday to discuss the negotiations with Israel.Would Israel or any other Western country allow the leader of a friendly state with which it has diplomatic relations meet with Islamic State leader Abu Bakr al-Baghdadi and allow the organization to operate within its territory? Jonathan Schanzer, vice president for research at the Foundation for Defense of Democracies in Washington, told The Jerusalem Post the upcoming deal is “a win for the status quo as nothing really changes.”Besides Hamas not being able to carry out military activity from Turkish soil, everything else stays the same: Hamas maintains its Turkish headquarters; Turkey continues assisting Hamas-ruled Gaza; and Israel facilitates this.Israel does gain the removal and blockage of lawsuits against its soldiers in return for a multi-million dollar settlement for families of Turks killed or injured on the Mavi Marmara flotilla, but other than that “it is a victory for Erdogan.”Furthermore, Israel and some analysts have taken great pains to point out that terrorist organizations such as Hamas and Hezbollah cannot be separated into political and military entities since they feed off and support one another as part of the same organization.When the EU decided to ban Hezbollah’s military wing but not its political one in 2013, Israeli supporters criticized it for not going far enough.Netanyahu said at the time that he hoped the decision would lead to real steps in Europe against the group, and stated that, in Israel’s view, Hezbollah was one indivisible organization.Hence, allowing Hamas to continue to function anywhere undermines Israel’s security.Meanwhile, the Turkish Humanitarian Relief Foundation (IHH), the same organization that was behind the Mavi Marmara flotilla that sought to break Israel’s blockade of the Gaza Strip in May 2010, objects to any rapprochement with Israel, the Hurriyet Daily News reported.Selin Nasi, a columnist for the Hurriyet Daily News and the Turkish- Jewish weekly Salom, told the Post that if the report of the upcoming deal is true and Turkey agreed to the easing of the blockade but not lifting it, then “it could have a political cost with his conservative political constituency here in Turkey.”After opposing Israel so strongly in the past, Erdogan is in an uncomfortable situation. But because of the wars raging in Syria, Iraq, and the domestic Kurdish insurgency, as well as its terrible relations with Russia and many of its Middle Eastern neighbors, he felt something had to give.Schanzer pointed out that from Israel’s perspective, the government would like to have normalized ties with Muslim countries in general.“But there is no way to have true normalized relations with Erdogan’s government. It is virtually impossible to imagine, given that Turkey remains an Islamist-ruled state with close ties to Hamas and other anti-Israel organizations.”Perhaps the deal can be best described as an agreement “to stop publicly fighting, while quietly continuing to disagree on virtually everything.”