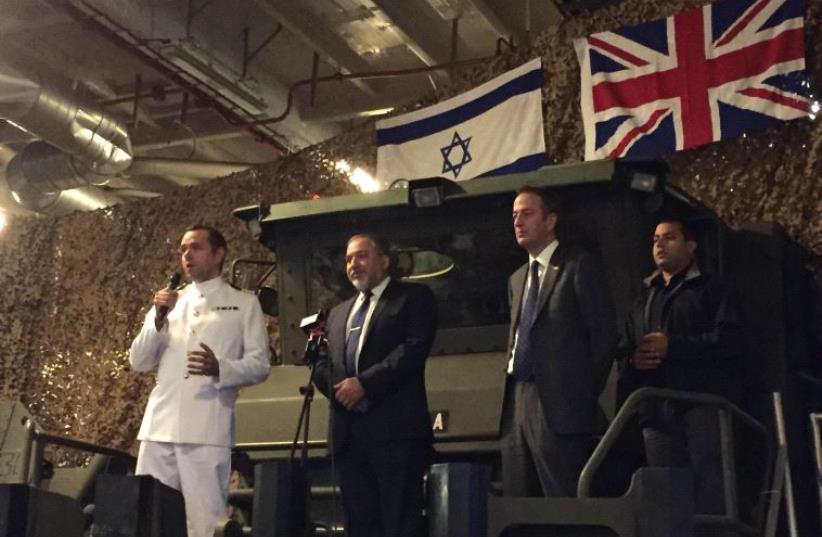 Defense Minister Avigdor Liberman aboard the HMS BULWARK
(photo credit: ANNA AHRONHEIM)
Advertisement
The British Royal Navy assault ship HMS Bulwark arrived in Haifa Port on Tuesday for a short visit before she sails back to the United Kingdom.The Bulwark, whose captain is Capt. James Parkin, is deployed as part of the Royal Navy’s Joint Expeditionary Force (Maritime) Task Group commanded by Commodore Andy Burns.Based in Devonport, the Bulwark is one of the Royal Navy’s two amphibious assault command and control ships. It is the second largest ship in the British fleet, measuring 176 meters long, displacing some 18,000 tons and with a company of nearly 600 men and women.These include some 170 Royal Marines and 42 Commando Royal Marines, including their Viking armored all-terrain tracked vehicles, as well as numerous support vehicles. Able to deploy worldwide within five days, the Bulwark’s first operational deployment was to Lebanon in 2006: evacuating civilians following the outbreak of the Second Lebanon War between Hezbollah and Israel.According to a Royal Navy statement, the Bulwark’s docking in Haifa “demonstrates the growing relationship between the Royal Navy and the Israeli Navy and the desire to continue to develop that interaction.”Defense Minister Avigdor Liberman, speaking on board the ship, told the crowd, “This visit is a sign of the deep cooperation between the UK And Israel. We enjoy very good cooperation on many levels, including intelligence, and now of course, between our navies. I think that especially today, with what is happening around us in the Middle East, this is a very important visit.”Capt. Parkin told The Jerusalem Post that “We have Israel Navy colleagues on board right now, learning, getting presentations, and exchanging ideas about operations. We have a great relationship with the Israel Navy, although it is quite difficult to get a warship out to Israel, but we try to as often as we can. I am very proud that I am in Haifa for the second time in my naval career.”Prior to docking in Haifa, the Bulwark took part in several sea exercises with the Israel Navy. “We’ve operated with several Israel Navy ships, practicing communications and maneuvering,” said Parkin. “It is a tremendous honor to bring the Royal Navy’s amphibious flagship into Haifa, and I particularly enjoyed exercising with the Israel Navy at sea beforehand, as well as discussing matters of mutual interest.”But it’s not all work for these men and women. The ship’s company will challenge the “Israeli Barbarians” rugby team to a match, watch Beersheba vs Inter Milan in the Europa League and take time to see some of the historic sights in Israel.”“Most of the 560 people on board my ship have never visited Israel before, and there is a palpable sense of excitement on board about exploring this vibrant and fascinating city,” Parkin said.“I’ve never been to Jerusalem, and I’m going there tomorrow. I am very excited, it’s a life-long ambition,” Parkin told the Post, adding that “if there isn’t a photo of me lying on my back in the Dead Sea reading a newspaper, I’ve done something wrong.”In the Royal Navy statement, British Ambassador to Israel David Quarrey said “I am delighted that HMS Bulwark has been able to call in at Israel during their current deployment. As part of a strengthening defense relationship with Israel, this visit is evidence of the UK’s strong commitment to security in the region.”Speaking to the Post, Quarrey said “it’s fantastic” to have such a ship here in Israel. “It’s the largest ship that’s docked here for years, it’s a symbol of the growing partnership in defense and security between Israel and the UK, at a time that the two countries face very severe challenges. We need to be working together, and this ship symbolizes just that.”