“He doesn’t make me feel like I’m different for a moment,” said Nira Yadin, who can’t hear, but she reads lips and communicates with the press through text messages and e-mails. 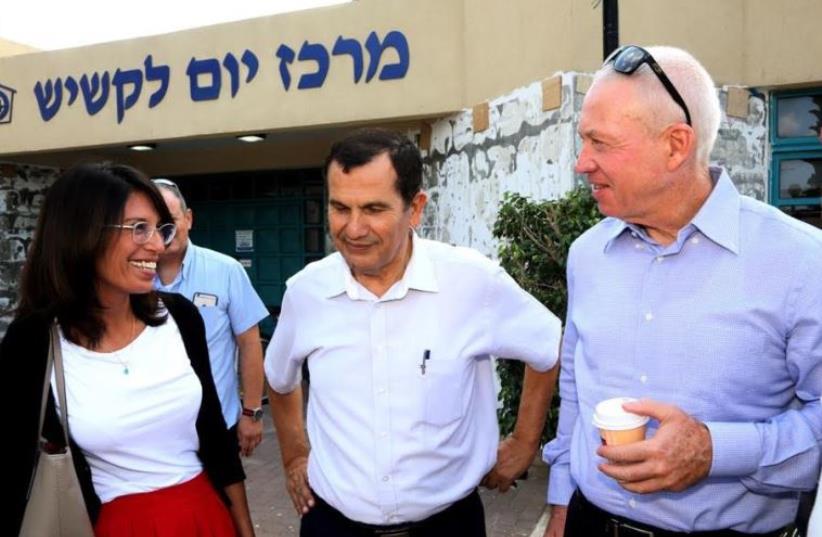 Yoav Galant's spokeswoman Nira Yadin, Or Akiva Mayor Yaakov Ederi, and Housing Minister Yoav Galant.
(photo credit: SASSON TIRAM)
Advertisement
In today’s world of email and WhatsApp, a journalist can work with a spokesperson for months without ever actually speaking to him or her. Nira Yadin, Construction Minister Yoav Galant’s new spokeswoman, plans to use that norm to her advantage, because she is deaf.Yadin, 39, a single mother of a 10-and-a-half year old, worked as a freelance journalist and photographer and a systems analyst for the Mekorot national water company, and decided she wanted to work in government, on serious policy issues like the housing crisis.In an interview with The Jerusalem Post via Facebook Messenger, Yadin said she had contacted several ministers, but decided that she wanted to work for someone she really believed in and set her sights on Galant.“I just sent him an SMS to his personal number,” she wrote. “I mentioned that I don’t hear and I was sure it would deter him, but I was surprised to find it didn’t and was invited to be interviewed.”Yadin had faced discrimination based on her disability in the past, from politicians and other potential employers, as well as fellow journalists, but said that MK Hilik Bar (Zionist Union) was one of the people who encouraged her and told her not to give up.She recounted an interview in which she mentioned she was deaf and the interviewer told her she would still have to answer phones and did not know about the technology she could use to do the job.The interview with Galant, however, was completely different, Yadin recounted.“I found a man who listened and was interested in the things I knew and understood. I didn’t feel that I had to apologize for my disability, and he surprised me by not discussing it at all. That’s how I realized I was dealing with someone very smart, and he won me over,” she said.At that point, Yadin decided she would not take no for an answer and started working pro bono. She started sending Galant advice on his media relations almost daily and wrote flattering posts about him on social media. Three weeks later, the minister called and hired her, and Yadin started the job a week- and-a-half ago.“I think what I said and advised him seemed like a good fit to him. We’re talking about a retired lieutenant-general; he doesn’t let people get away with things. He gets things done and only surrounds him - self with people who get things done,” she said.Yadin doesn’t see her disability as a serious limitation in her job: “We all use emails and WhatsApp. I don’t feel handicapped in any way. In big meetings, there is always someone transcribing them and I can see what was said.”In fact, Yadin finds her fluency in reading lips to be an advantage at times.“I pay very close attention to whoever is talking, while, unfortunately, in many discussions, people play with their cellphones while some - one speaks. I can understand what is being said even when it’s very noisy,” she explained.Meanwhile, Yadin says she is treated like everyone else in her new workplace.“The minister doesn’t make me feel different for a moment; he just gives everyone the job of leading the Construction Ministry without any difference. That is part of his charm,” she stated.