Israel is clearly pivoting to Asia, Netanyahu announces in Singapore 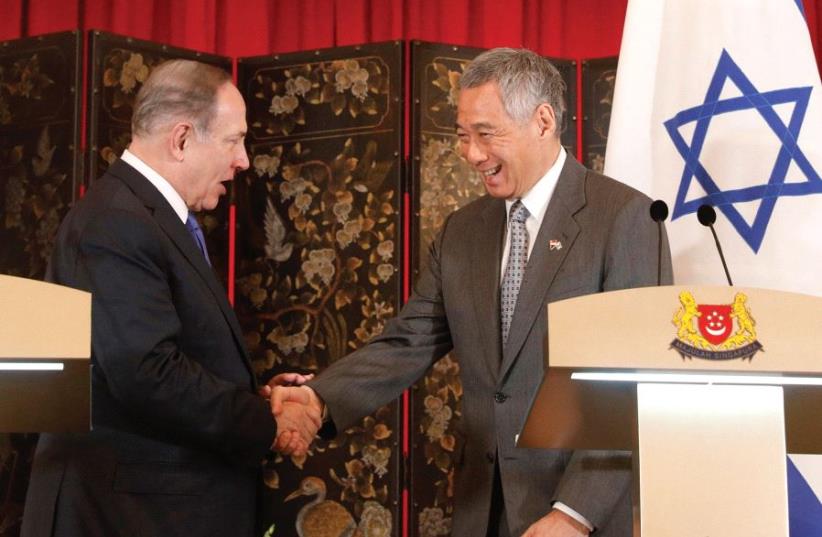 Singaporean Prime Minister Lee Hsien Loong welcomes Prime Minister Benjamin Netanyahu to the Istana presidential palace.
(photo credit: REUTERS)
Advertisement
SINGAPORE – Israel is pivoting toward Asia in a “very clear and purposeful way,” Prime Minister Benjamin Netanyahu announced Monday evening in Singapore.As part of this pivot, he will be traveling to China next month and hosting Indian Prime Minister Narendra Modi over the summer.Netanyahu’s comments came at a state dinner in his honor hosted by Singaporean Prime Minister Lee Hsien Loong, who was instrumental in bringing his country’s robust ties with Israel out into the open last year when he visited. Netanyahu’s visit is a reciprocal one.National Economic Council head Avi Simhon told journalists accompanying the prime minister that the fact Singapore is now willing to make the ties public is a testament to the importance it attributes to economic and security ties with Israel.“The public revelation of the ties is important economically, because it signals to the business community here to go do business with Israel,” Simhon said. He added that Asia is quickly turning into the most important market for Israel, and that Singapore and Australia – where Netanyahu will travel on Tuesday – are bridges to Asia.They serve as a bridge, he said, because they make it possible for Israel to increase trade not only with countries with whom Israel has good ties on the continent, such as China and India, but also with countries such as Indonesia and Malaysia, with whom Israel does not have formal ties, and which prefer that trade go through Singapore and Australia. Singapore is a base for Israeli firms doing business in those two countries.That Singapore, a small country surrounded by Malaysia and Indonesia, which are majority Muslim states with varying degrees of hostility toward Israel, is willing to be open about its ties with Jerusalem indicates the importance it attributes to them.Lee seemed to be sending a signal to his neighbors, however, when he raised the Palestinian issue in public statements he made after meeting Netanyahu in the Presidential Palace.
PM Netanyahu arrives in Singapore (credit: GPO)
One diplomatic official said that by inviting Netanyahu for the first official visit by an Israeli prime minister, the country was treading carefully amid neighbors displeased with Singapore’s close ties to Israel.While the Middle East is far away from Southeast Asia, Lee said it has an impact on the region because the Arab-Israeli conflict is a very emotional issue for Muslims, and Singapore is surrounded by Muslim countries.“People all over the world are seized with the Israeli- Palestinian issue. We ourselves have a significant Muslim population, who are an important part of our harmonious multiracial society,” Lee said.In his brief comments on the diplomatic process, Lee said that he knows the situation in the Middle East is complex, and expressed hope that direct negotiations can be resumed.“We have consistently believed that a two-state solution between Israel and Palestine, however hard to achieve, is the only way to bring peace and security to both peoples,” he said.Lee diverted from his prepared text, taking out lines saying that an agreement will “involve very difficult compromises.”He also left out a sentence saying that unilateral actions by either side are not helpful, and urging the parties “to exercise restraint and comply with international law.”Lee said that while this was the first official visit by an incumbent prime minister, Yitzhak Rabin “stopped by” in 1993 after visiting Jakarta.“Singapore and Israel are old friends,” he said, noting that the friendship began when Israel responded to requests to help build the Singapore Armed Forces after its independence in 1965.“This ensured our survival at a time of great uncertainty and vulnerability,” Lee said. “We will always be grateful. Since then, our ties have expanded beyond defense and security.”Netanyahu said this was his first visit to Singapore, and that when he landed he was “absolutely amazed” by what he saw. “As much as you hear about Singapore’s success, to see it physically is quite something. It demonstrates the power of people, of ideas and the potential of power unleashed.”He said Israel and Singapore, small nations that have in many areas become global powers, “are kindred spirits.”He added that the opportunities of cooperation are vast, that the future belongs to those who innovate and that “Israel and Singapore are innovation nations.”After landing early Monday morning, Netanyahu went immediately to the Presidential Palace for meetings with President Tony Tan Keng Yam and Lee. Netanyahu was greeted by Lee and a military honor guard.Despite the pomp and circumstance, the Singaporeans requested a relatively low profile for the visit, concerned that a high-profile visit could trigger protests in Malaysia and Indonesia. Netanyahu was hosted for a state dinner, but he did not have any major public appearances.Netanyahu also visited Singapore’s Maghain Aboth Synagogue, where he addressed a couple hundred members of the city-state’s 2,500-strong Jewish community. He was greeted at the synagogue by grade school children in beige shorts and white shirts singing “Hevenu Shalom Aleichem” and waving miniature Israeli and Singaporean flags.Netanyahu said the Jewish community in Singapore, which dates back almost two centuries and has its origins among Jews who came from Baghdad, “serves as a human bridge between Singapore and Israel. I know that you care for the State of Israel. I know you care for Jewish traditions.This gathering is an indication of that concern and that passion.”Among those in attendance was Anthony Stiefel, who is originally from South Africa.He has lived in the country for the last eight years and has a business making chef uniforms.He said Netanyahu’s visit was important because it “helped galvanize the community,” which is increasingly split between its Orthodox and Reform elements, and also because it is important to recognize that the Jewish community in Singapore is not some far-flung Jewish outpost, but rather a vibrant community in Southeast Asia.