It is rumored that the decision to remove metal detectors from the Temple Mount was linked to the safe return of an Israeli embassy guard who was trapped in Jordan. 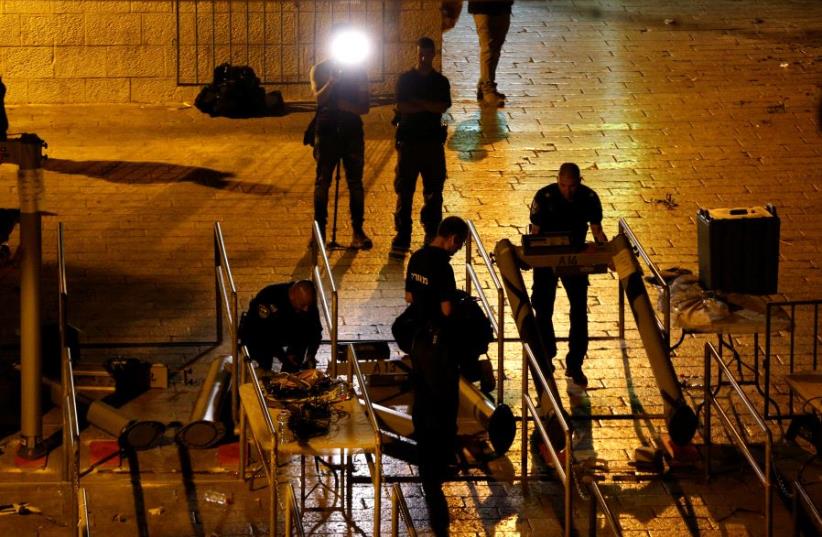 Israeli security forces remove metal detectors which were recently installed at an entrance to the Temple Mount
(photo credit: AMMAR AWAD / REUTERS)
Advertisement
Israeli authorities began Tuesday morning to dismantle metal detectors it had placed at the entrance to Jerusalem's Temple Mount, the placing of which earlier this month led to widespread outrage in the Muslim world, which claimed Israel violated the status quo in the holy site.The move came following a series of security cabinet meetings on Monday in which it was decided to remove the detectors and replace them with smart, less obtrusive surveillance methods. In the meantime, Israel is also removing some of the security cameras it installed overlooking the entrance to the complex. Joint List MK Jamal Zahalka called the installation of cameras "a further provocation by the Netanyahu government."
Israel installed metal detectors at entry points to Al-Aksa mosque compound after two police officers were fatally shot on July 14, triggering the bloodiest clashes between Israelis and Palestinians in years.
A statement issued after the forum of senior ministers concluded their meeting said they had decided to act on the recommendation of the security bodies and replace the metal detectors with "smart checking" means.
Reuters witnesses in the Old City saw municipal workers installing metal beams above some of the narrow stone paved streets for closed circuit TV cameras. Israeli media said there were plans to invest in advanced camera systems. The cabinet statement added that it had allocated 100 million shekels (about $28 million) for the equipment and for additional police officers.Until the new measures are put in place, police presence at the site will be enhanced in order to ensure security for the worshipers and visitors to the site.
The decision to remove the metal detector gates was an about-turn after the rightist government of Prime Minister Benjamin Netanyahu, wary of being seen to capitulate to Palestinian pressure, said on Sunday the devices would stay put.
But on top of the outbreak of violence, Palestinian Authority President Mahmoud Abbas moved to suspend official contacts and there was increased international criticism which put pressure on Israel.
Netanyahu was further hampered following a fatal shooting incident at the Israeli embassy in Jordan on Sunday when an Israeli security guard was attacked and shot dead two Jordanians.
Following the cabinet meeting on Monday,  Netanyahu took the time to thank US President Donald Trump for helping solve the crisis over the Temple Mount. Though it was not said so outright by any of the parties, the removal of the detectors appeared to be linked to Jordan agreeing to send home the security officer."I want to thank President Trump for instructing his adviser Jared Kushner and dispatching his envoy Jason Greenblatt to the region in order to aid our efforts to bring back the embassy team quickly," said Netanyahu. "I also thank King Abdullah of Jordan for the close cooperation." The removal of the metal detectors was received with mixed emotions in the Israeli political arena. Culture Minister Miri Regev, a member of Netanyahu's Likud party, said she was saddened by the decision. "The Cabinet's decision form yesterday is upsetting. You don't have to be a security expert to understand that the metal detectors have a security and deterrence effect," Regev said.Deputy Foreign Minister Tzipi Hotovely also spoke out against the decision, saying she didn't understand it and that it was misguided. In an interview with Israel Public Radio, the Likud MK said "placing the metal detectors was a legitimate action. When what you want to do ignite the region, any excuse works."Zionist Union chairman Avi Gabbay, meanwhile, said he supported the move, claiming that it was impossible for Israel to change its policies because of three terrorists. Gabbay was referring to the three Arab Israelis who started the saga by opening fire and killing two police officers on the Temple Mount 10 days ago.