"In Obama's world view we have moved closer to peace, but during his term we have just gotten further from it," she said. 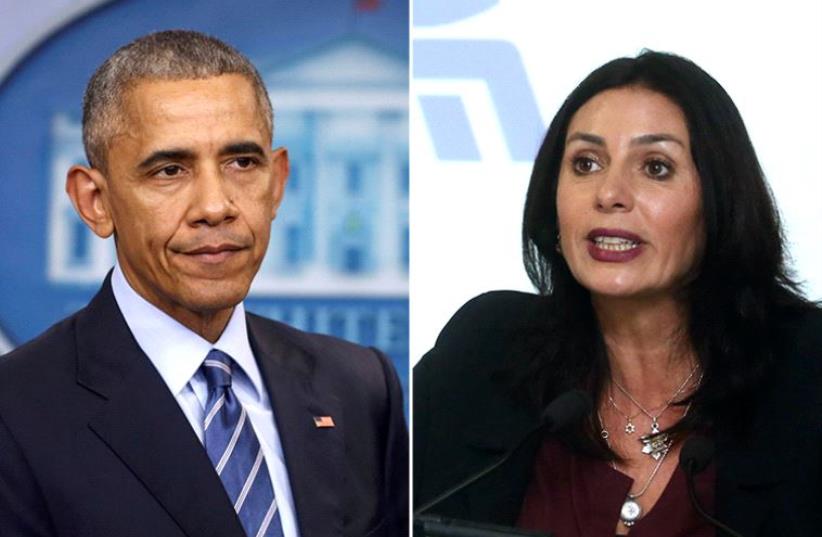 Obama and Regev
(photo credit: REUTERS,MARC ISRAEL SELLEM)
Advertisement
Culture and Sport Minister Miri Regev has made public her pleasure that US President Barack Obama is soon leaving office. In an interview with Army Radio on Sunday, Regev said "thank God that Obama is finishing his term.""In Obama's world view we have moved closer to peace, but during his term we have just gotten further from it," she said, adding that "there have been more and more terror attacks in Berlin, Orlando and yesterday in Turkey, what does any of this have to do with the [Israeli] settlements?"
Obama urges Israel end occupation and Palestinians accept Israel
"It just cannot be the case that this is the way the President of the United States, who thank God is finishing his term, treats the State of Israel, as the weak link in the Middle East," she stated.Regev's comments came more than a week after Obama administration provoked the Israeli government's fury by failing to block the passage of an anti-settlement resolution in the UN Security Council.In the time that has passed since the UN Security Council vote on December 23, and the US abstention, the country has expressed every emotion from shock, mostly in the form of dismay and plain outrage, with comment and condemnation from ministers, government officials and of course from the Israeli public.Immediately after the resolution passed, Prime Minister Benjamin Netanyahu directed his rage primarily at Obama, who days before was urged to exercise his country's ability to exercise a veto. "Yesterday, in stark contrast to this commitment [to not dictate terms of a permanent settlement to Israel through the UN], the Obama administration took a shameful anti-Israel step at the UN."Netanyahu also expressed concern that the resolution will put a damper on any possible development in the peace process. "The decision not only does not bring peace closer, but it makes it more distant," he said.Netanyahu and Obama have had a particularly acrimonious relationship since they both took office in 2009.Over the weekend the New York Post reported that US President-elect Donald Trump's team has been "aggressively" courting Netanyahu to attend the incoming president's January 20 inauguration.