In the opposition, MK Shelly Yacimovich (Zionist Union) said the ministers’ calls for death penalty are an attempt to replace decision-making. 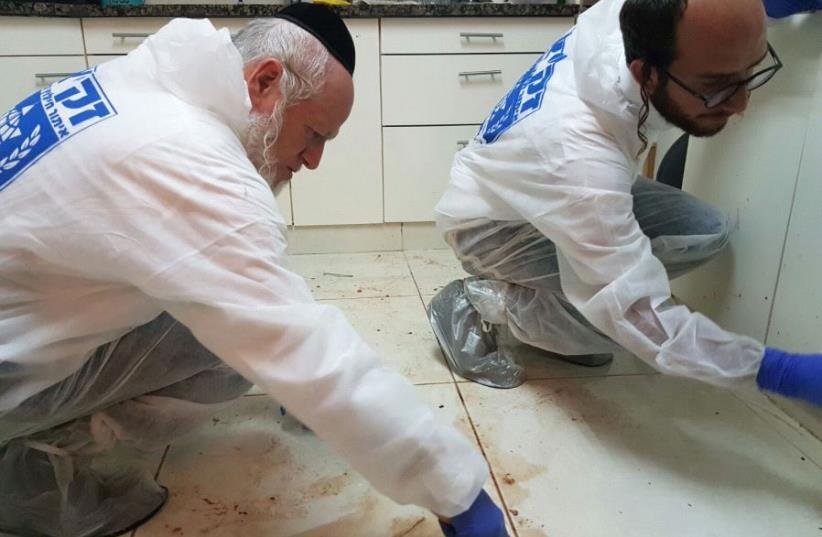 Scene of terror attack in Halamish
(photo credit: ZAKA)
Several ministers in the security cabinet ahead of Sunday’s cabinet meeting called for the terrorist who massacred a family in Halamish on Friday night to be executed.Military courts can sentence someone to death, though the option has not been used since 1962, when Adolf Eichmann was hanged after being convicted of genocide and crimes against humanity.
Settlers voice anger after deadly Palestinian stabbing attack (credit: REUTERS)
The ministers called for the death penalty for 19-year-old Palestinian Omar al-Abed who entered a home in Halamish in Samaria and began stabbing members of the Salomon family, as they were having Shabbat dinner. He murdered Yosef Salomon, 70, and his children Chaya, 46, and Elad, 36, who was celebrating the birth of his fifth child. He also severely injured Yosef’s wife, Tovah, who remains hospitalized.Elad’s wife was able to hide with her five children, saving their lives. An IDF soldier who lives nearby shot Abed before he was able to continue the massacre.Defense Minister Avigdor Liberman said in an interview with Ynet that “in such an extreme case as this, there is certainly a place for the death sentence, and that is in the authority of the military court of Judea and Samaria.”“The option of the death penalty exists in military courts,” Education Minister Naftali Bennett said. “There is no need for legislation; just to ask. I call on the military prosecution to demand the death penalty for the terrorist that killed the Salomon family.”Justice Minister Ayelet Shaked, also of Bayit Yehudi, took to Twitter to say, “The murderers of children and families deserve the death penalty. This punishment exists in the military courts if there is consensus among the judges. This is a case that requires the death penalty for the murderer.”Transportation and Intelligence Minister Israel Katz made similar comments on Saturday night. He said he plans to raise the demand in the cabinet meeting and that the attorney-general said the death penalty was a possibility if it was the Security Cabinet’s position.“The beastly man who murdered three family members should get the death penalty. If it weren’t for the resourcefulness of the soldier who shot him, he would have murdered more... It’s time to implement the policy,” of allowing death sentences in a military court, Katz stated.Prime Minister Benjamin Netanyahu said in a meeting of Likud ministers that they should behave responsibly.“Since the beginning of the events,” Netanyahu said of the wave of violence that began with Israeli Arabs killing three Israeli policemen last Friday, “I held a series of meetings and evaluations of the situation with all the security forces, including those in the field.We are getting an up-to-date picture of the situation and recommendations of how to act, and we are acting in accordance with them.“We are managing this calmly, decisively and responsibly, and we will continue to do that to protect security. I also expect you to behave with the necessary responsibility,” the prime minister stated.Yisrael Beytenu MK Oded Forer also called for the death penalty, a policy his party has long touted.“A similar thing happened to the Fogel family,” when Palestinians massacred five members of a family in their beds in Itamar in 2011, “and the murderers are sitting in prison and enjoying good conditions and continuous funding from the Palestinian Authority,” Forer said.Similarly, Deputy Minister in the Prime Minister’s Office Michael Oren questioned whether the terrorist should have been killed on the spot.“A murderer of three innocent Israelis will receive excellent medical care,” Oren wrote on Twitter. “Is it not time to reexamine the rules of engagement?” In the opposition, MK Shelly Yacimovich (Zionist Union) said the ministers’ calls for the death penalty are an attempt to replace decision-making.“Any reasonable person knows that it’s not a punishment, because death is exactly what this heinous terrorist hoped for, and that the call will not be implemented and will remain a populist call for revenge,” she stated. “It is unfortunate and disconcerting that cabinet ministers have decided to protect the prime minister from his Right for political reasons, instead of dealing with solutions that will prevent murderous and shocking terrorist attacks like the one on Friday night.”Labor leader Avi Gabbay criticized ministers for making too many public statements instead of focusing on action that could help the country.“No one is really managing the dangerous situation in which we find ourselves. No one is weighing the full picture and the price we are all paying,” Gabbay said. “Honored ministers, talking too much can be harmful. Weigh alternatives, take advice, make decisions and act. That is the minimum we expect and that is what you owe citizens of Israel.”Gabbay added that Israelis deserve responsible leaders who do not just say the words “death penalty,” but think about their impact.“Death penalty is not the kind of threat that villainous suicidal terrorists care about before committing one of their despicable acts of suicide,” he stated.Also on Sunday and in light of recent violent events, Yesh Atid withdrew its no-confidence motion that was scheduled for a vote in the Knesset Monday.“We pulled our no-confidence motion in the government,” Yesh Atid chairman Yair Lapid wrote on Twitter Sunday. “There will be time for criticism, but today, we need to be united against terrorism.”Lapid called on other opposition parties to do the same.Yesh Atid was planning a no-confidence motion titled: “A prime minister who is up to his neck in investigations does not have a moral or public mandate to decide such fateful matters for the State of Israel, because there is a real concern that he will make decisions based on his personal interest of his political survival and not based on the national interest. The right thing for this government to do is go home.”Zionist Union and Meretz also have no-confidence motions related to corruption; the Joint List’s motion is titled “The next war is sponsored by the Netanyahu government.”