'The nuclear agreement with Iran blocked Iran’s pathways to a nuclear weapon for years to come,' J Street said. 'As of now, Iran has abided by the terms of the deal.' 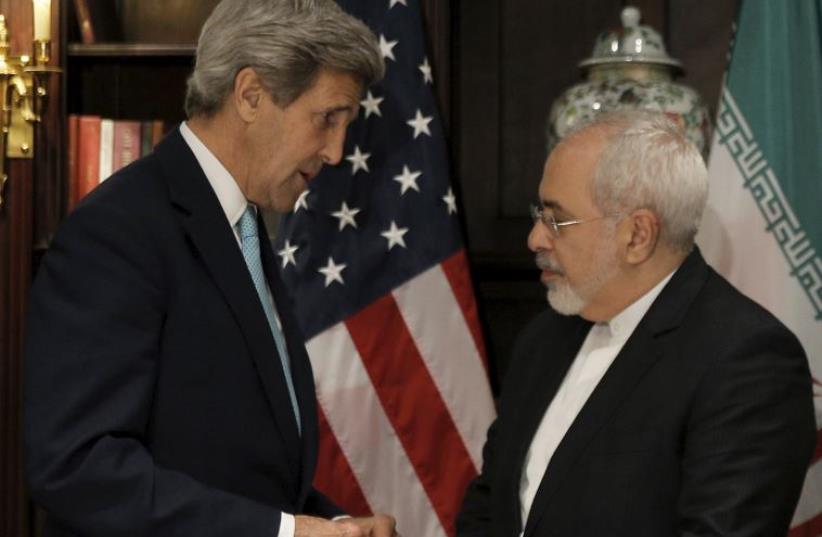 US Secretary of State John Kerry (L) meets with Iran's foreign minister, Mohammad Javad Zarif, in Manhattan
(photo credit: REUTERS)
Advertisement
Responding to reports that it received hundreds of thousands of dollars in order to tout the Obama administration’s nuclear agreement with Iran, J Street, the dovish Jewish lobby, responded on Sunday that the deal improves Israel’s security. “J Street worked to advance the nuclear agreement with Iran out of the belief that this is an important agreement which contributes mightily to Israel’s security,” J Street said in response.“This is a belief that is shared with many officials in both the Obama administration as well as the Israeli defense establishment and among many in the American Jewish community, most of which supports the agreement,” the organization said.“The nuclear agreement with Iran blocked Iran’s pathways to a nuclear weapon for years to come,” J Street said. “As of now, Iran has abided by the terms of the deal.”J Street cited remarks by former IDF chiefs of staff Gabi Ashkenazi and Benny Gantz as well as by their successor, current army chief Gadi Eisenkot, who said they viewed the Iran deal as “an opportunity” that allows “freedom to maneuver.”J Street was the single largest beneficiary last year of the Ploughshares Fund, a group that seeks to eliminate the world’s nuclear stockpiles, with over $575,000 in grants that funded advocacy for the Iran nuclear deal.Ploughshares’ annual report, first reported last week by the Associated Press, emphasizes the foundation’s role in helping to bring about support for the sanctions relief for nuclear rollback deal last year.The foundation has not made a secret of its advocacy for the Iran deal, nor of its backing for J Street, the liberal Jewish Middle East policy group. The annual report is posted online and at least one J Street staffer features in Ploughshares’ triumphant video, “How we won,” produced after the Obama administration successfully squelched congressional opposition to the deal last year. J Street is listed in the video among the group’s beneficiaries.J Street and Ploughshares were part of a loose coalition of groups that have been coordinating strategy on building support for the deal since late 2013, occasionally consulting with the White House.The amount of funding for J Street underscores the significance deal proponents attached to garnering American Jewish support for the deal. J Street and J Street Education Fund received a total of $576,500, making it by far the largest recipient of funds. One goal of the funding was “to mobilize Jewish support for a final deal.”Ploughshares granted The National Iranian American Council, another top beneficiary, over $281,000.Opponents and supporters of the deal focused heavily on Jewish Americans. The American Israel Public Affairs Committee and Prime Minister Benjamin Netanyahu’s government lobbied hard in the community against the deal and top administration officials made direct appeals through Jewish groups on behalf of the deal.The report also shows $100,000 in grants to National Public Radio to “support national security reporting that emphasizes the themes of US nuclear weapons policy and budgets, Iran’s nuclear program, international nuclear security topics and US policy toward nuclear security.”Ploughshares is one of an array of advocacy organizations that funds NPR, and which the radio network acknowledges. NPR told the AP that it maintains a “rigorous firewall” to ensure independent coverage.