Dr. Kamal Al-Labwani presents a new plan to control violence and terrorism near the Druse village of Hader near Israel’s territory in the Golan Height as a pilot for calming other areas in Syria 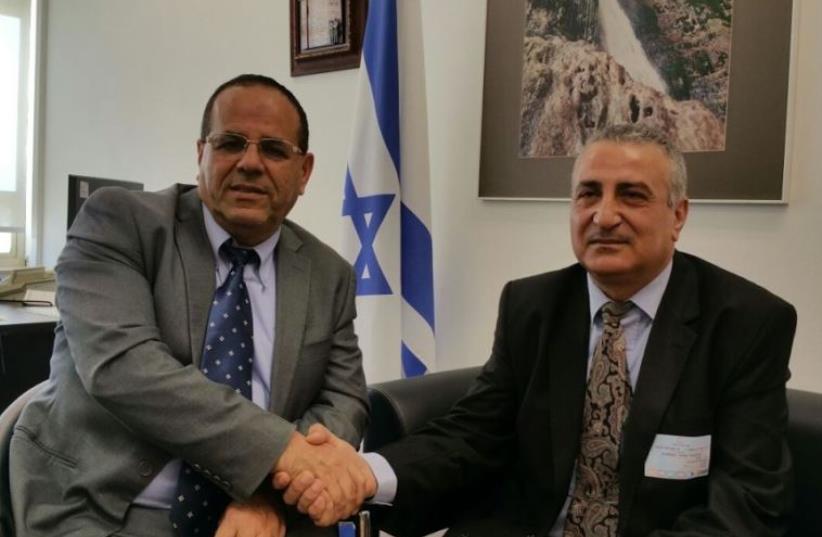 Deputy Regional Cooperation Minister Ayoub Kara with Syrian opposition leader Dr. Kamal Al-Labwani
(photo credit: Courtesy)
Advertisement
Deputy Regional Cooperation Minister Ayoub Kara met with visiting Syrian opposition leader Dr. Kamal al-Labwani in the Knesset on Sunday.Labwani presented a new plan to control violence and terrorism near the Druse village of Hader, near Israel’s territory on the Golan Heights, as a pilot for calming other areas in Syria.He added that this would help “prevent the world war that is coming.”The Syrian opposition leader requested that Israel open its border to humanitarian aid.Labwani is touring several other countries in the region, including Qatar, Saudi Arabia, Jordan, and others that he estimates are capable of influencing Russia to impose a stop to the war in Hader and later in all of Syria. Under such a scenario, Labwani sees Russia as capable of forcing Iran and Hezbollah to stop fighting.Labwani is scheduled to speak on Sunday evening to the Conference of Presidents of Major American Jewish Organizations in Jerusalem and ask them to influence US policy to support his proposal.After the meeting, Kara said that all attempts to deal with the Syrian refugee crisis in the world have failed and it is necessary to adopt Labwani’s plan and take care of the refugees within Syria.He added that stopping terrorism and violence would prevent a broader regional war – and possibly a world war.The Syrian opposition leader also seeks Israel’s help in establishing field hospitals inside Syria so that the injured would not have to be treated in Israel.