Trump to son-in-law Kushner: 'If you can't produce peace in the Mideast, nobody can'

President-elect Trump expressed his faith Kushner's appointment, saying that "I have a feeling that Jared is going to do a great job." 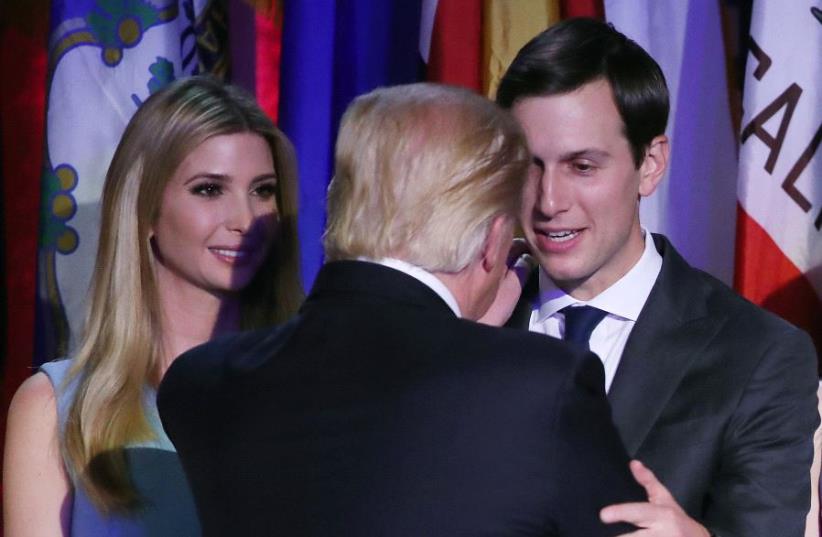 President-elect Donald Trump embraces son in law Jared Kushner,(R)
(photo credit: AFP PHOTO)
Advertisement
One day prior to his inauguration, President-elect Donald Trump made an appearance at a candlelight dinner for donors in Union Station on Thursday, promising "four incredible years" and celebrating his surprise November victory.
Donald trump speaks to donors Thursday night
"So I just want to thank everybody. We're going to have four incredible years. It's going to be something special," Trump said to supporters in attendance.In his speech Trump warmly turned to his daughter Ivanka who was listening in the audience and thanked her for her support throughout his race for presidency: "In the audience we have a very special person who worked very hard, who married very well- my daughter Ivanka." The President-elect went on to talk about his son-in-law, Jared Kushner, who is slated to become a senior White House advisor working on trade and the Middle East in a rare case of a close presidential family member taking a major job. "I sort of stole her husband," Trump joked. While critics were quick to point out that Kushner lacks diplomatic experience, Trump expressed confidence in Kushner's appointment, saying that the latter is "so great. If you can't produce peace in the Middle East, nobody can. OK. All my life I've been hearing that's the toughest deal in the world to make. And I've seen it, but I have a feeling that Jared is going to do a great job."Trump called his supporters "the forgotten man and the forgotten women," adding that "you are not forgotten anymore." Trump takes office on Friday after a bitter presidential campaign marked by allegations of sexual harassment, race baiting and foreign hacking.About 900,000 people are expected to pack central Washington, including the grassy National Mall facing the Capitol, where the New York businessman and former reality TV star will be sworn in, and the parade route along Pennsylvania Avenue to the White House.