Republican lawmakers tell news conference they had filed a measure to give Israel an additional $1.5 billion in military aid, while renewing US sanctions on Iran. 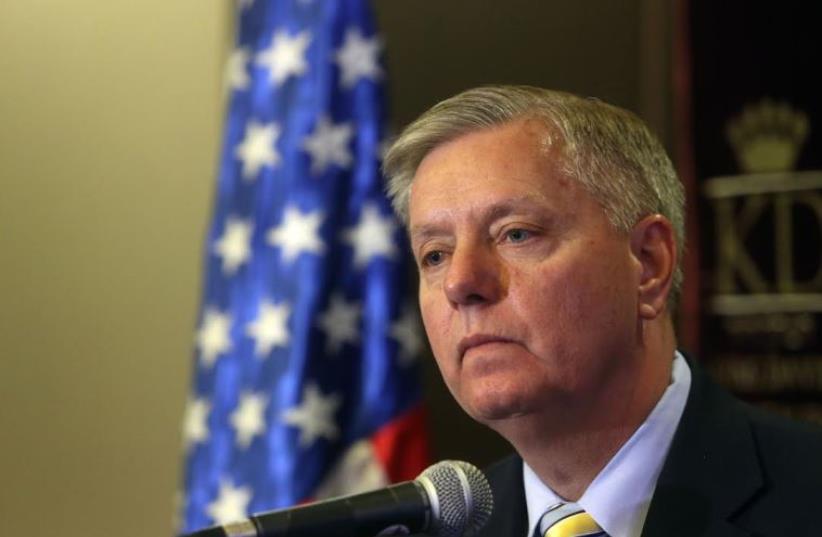 Lindsey Graham
(photo credit: MARC ISRAEL SELLEM)
Advertisement
WASHINGTON - Republican US lawmakers launched an effort on Tuesday to modify a $38 billion military aid agreement with Israel by providing more money and easing controls on how it is spent, setting up a showdown with President Barack Obama over the package days after it was signed.Senators Lindsey Graham, Kelly Ayotte, John McCain and Ted Cruz told a news conference they had filed a measure to give Israel an additional $1.5 billion in military aid, while renewing US sanctions on Iran.Republican Senators Mark Kirk, Marco Rubio and Roy Blunt also co-sponsored the bill introduced on Tuesday.Ayotte, McCain, Kirk, Rubio and Blunt all face competitive races for re-election on November 8.Arguing that US law gives Congress control of spending, they objected to a provision preventing Israel from asking for additional funds from Congress after the new Memorandum of Understanding (MOU), begins at the end of fiscal 2018."This is a very dramatic moment in the US-Israel relationship between Congress and the state of Israel. Congress is not going to sit on the sidelines," Graham said.The senators also object to Israel's agreement to return any money if Congress tries to send it more than $3.8 billion per year before then.Graham said he would introduce legislation to overturn a provision in the agreement that phased out an arrangement that has allowed Israel to spend 26.3 percent of US military aid on its own defense industry instead of on US weapons.US and Israeli officials signed the agreement on Wednesday. The 10-year package is the largest in US history. It was reached after nearly 10 months of negotiations that underscored continuing friction between Obama and Prime Minister Netanyahu.But Netanyahu decided it would be best to forge a new arrangement with Obama, who leaves office in January, rather than hoping for better terms from the next US administration, according to officials on both sides.The senators insisted that Netanyahu was forced into signing because Israel's arch-enemy Iran is growing stronger as it obtains billions of dollars unfrozen under an international nuclear agreement reached last year."Now is not the time to say that we're going to nickel and dime Israel," Graham said.Congressional Republicans strongly oppose the nuclear pact. They angered the White House in 2015 by inviting Netanyahu to give an address to Congress opposing it.They have offered several pieces of legislation to overturn or undermine the nuclear deal, and sought to make it an issue in the 2016 US elections.