Relatives of missing Israelis in Nepal wait and worry 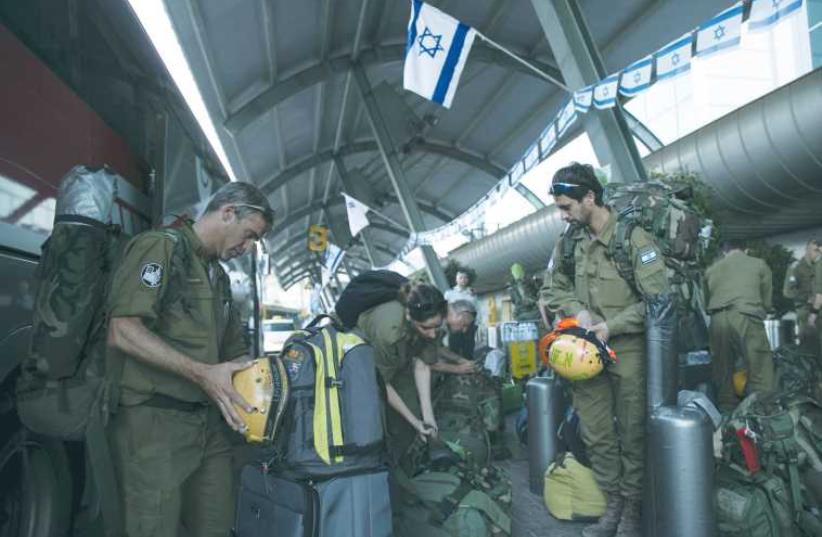 IDF SOLDIERS, members of an aid delegation, prepare their equipment as they wait for a flight to Nepal at Ben-Gurion Airport
(photo credit: REUTERS)
Orit Zehngut is waiting for a sign of life from her son, Amit, 23, who was on a trek with two friends in the area of the Frozen Lakes in Langtang, Nepal, when a massive earthquake hit Saturday.He is among the 150 Israelis in Nepal the Foreign Ministry has yet to locate.“I heard from him on Tuesday afternoon,” she said. “He was in Kathmandu. He told us over WhatsApp that he was going on a trek with two people and they would not be in touch for a week. Since then we have not heard anything.”Over the previous day, she has spoken with the ministry, the insurance company and many of his friends. They have posted his photograph on Facebook groups.The region he is in can be reached only by helicopter, so rescue efforts are complicated, Zehngut said.News that another group of 13 Israelis in that region are safe did not necessarily reassure her, because the large quake was followed by smaller aftershocks.Then there is the cold overnight temperature, she said.“We do not know how they will survive another night in the field,” she said.As the hours pass, her anxiety grows, she said.Noga Luzia’s worry has also risen, as she scours the Internet waiting for news of her daughter Puah Lasry, 19, and her friend Michael Benayahu, who were on the Tamang Heritage Trek when the quake hit.Luzia is among the many Israelis who posted a picture of a missing relative on Facebook, with a note, “If you have any information about my daughter, please let me know.”She herself leads tours to Nepal and was with her daughter until three weeks ago when she returned to Israel.On Friday, Benayahu called his parents, Luzia said, and gave them his location.Luzia has since tried to contact people in that village and has heard in a roundabout way of a number of Israelis in that area. She has tried to send them messages over the phone and emailed her daughter.“I expect they are OK. I understand that they know not to endanger themselves to send word to us,” Luzia said.Still, she notes, the time has passed and she has not heard from them.Since Saturday evening, many Israelis in Kathmandu who survived the quake have headed to the Israeli Embassy and the Chabad House, which have become hubs for Israelis in need of shelter and with nowhere else to turn.Two hours after Sunday’s 6.7-magnitude aftershock occurred, Chabad House Rabbi Chezki Lifshitz and his wife, Chani, posted on their Facebook page a comment calling upon Israelis in Nepal to refrain from traveling around unnecessarily.“Kathmandu looks like a real ghost town,” they wrote. “We are cut off from electricity, telephones and water, and slowly, slowly our basic commodities are running out.” Nonetheless, the Lifshitzes said they are managing to serve hot meals “to everyone in need around the clock.”Alongside the text on their Facebook page, the couple posted photographs of masses of people gathered in a courtyard on Sunday outside the bright purple Chabad House, cooking meals for one another, resting and cleaning.“We are here at the Chabad House – which has gradually transformed into a makeshift refugee camp – putting in every effort to help everyone in everything that is needed – if it’s physical help and if it’s mental help,” they wrote. “Since our communication is cut off most of the time, understand the fact that it takes a long time to reach us.”The night before, Chani said in a video post that in addition to attempting to calm the several hundred Israelis who had taken refuge with them, they were trying to assemble lists of missing persons as quickly as possible and continue to reach out to everyone. In some cases, contact was made via satellite instruments that the Chabad House distributes to hikers before they set out on treks.While The Jerusalem Post briefly reached the Lifshitzes by email on Sunday afternoon, the couple wrote back that their lack of electricity, water and telephones was making communication difficult, and that they would speak further when infrastructure was more stable.In addition to the hordes of people taking refuge at the Chabad House, overnight on Saturday some 170 Israelis camped out in the garden of the Israeli Embassy, where they took shelter in tents and received nourishment.As of Sunday evening, the Post was unable to reach embassy officials for an update on the situation there.Throughout Sunday, hundreds of concerned Israelis were posting about their missing loved ones on the Chabad of Kathmandu Facebook page, as well as a Hebrew page called “Earthquake in Nepal Updates and Israeli Locator” and several others.Some users uploaded images of their friends and family, while others posted photos of the villages the missing had last visited, pleading for any possible information on them that anyone might have.Relieving some anxious relatives, other people posted lists of Israelis traveling with any person who managed to successfully make contact with family members through satellite phones.Such lists were continuously being shared throughout Facebook and WhatsApp groups. A circulating Google spreadsheet also listed the names and information about nearly 100 Israeli trekkers, with notes as to whether contact had been made and when they had last been seen.Facebook meanwhile activated a “Nepal Earthquake Facebook Safety Check” application, in which Facebook users in Nepal could click to let their friends know that they are OK.“If you’re in one of the areas affected by the earthquake, you’ll get a notification asking if you’re safe, and whether you want to check on any of your friends,” Facebook CEO Mark Zuckerberg wrote overnight Saturday. “When disasters happen, people need to know their loved ones are safe. It’s moments like this that being able to connect really matters.”