As part of their visit, Casspi and friends will also hold a basketball clinic with Maccabi Tel Aviv’s youth department on Wednesday. 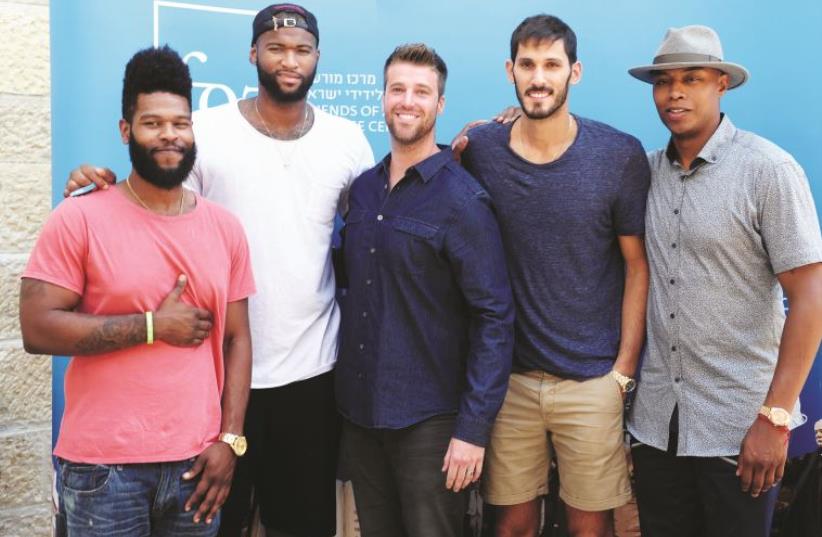 From left: DeMarcus Cousins, Chandler Parsons, Omri Casspi, and Caron Butler
(photo credit: KFIR SIVAN)
Omri Casspi and NBA colleagues past and present spent the weekend in Jerusalem as part of a joint initiative between NBA Cares, the league’s global community outreach initiative, and the Omri Casspi Foundation, an organization set up by the player aimed at presenting Israel in a positive light across the world. All-Star DeMarcus Cousins, as well as fellow Sacramento Kings teammates Rudy Gay and Caron Butler, arrived in Israel on Friday, with Iman Shumpert, Alan Anderson, Tyreke Evans and Chandler Parsons also among those who will spend the coming days in the Holy Land.
The NBA superstars visited the newly-opened Friends of Zion Museum to learn first-hand about the long history of friendship, cooperation and help from non-Jews, the hundreds who have helped the Jewish people during the last few generations, and especially during the Holocaust and the creation of the State of Israel.
After the tour, the Friends of Zion Museum presented Omri Casspi and his foundation with the Defender of Zion award for outstanding work on behalf of the Jewish people on and off the court. "Anyone who visits the Museum Friends of Israel understands preferable way of friendship and tolerance” said Mr. Casspi.
As part of their visit, Casspi and friends will also hold a basketball clinic with Maccabi Tel Aviv’s youth department on Wednesday.