1,500 runners from Israel and other countries participated in the race for team Shalva.

Israeli Olympian Ori Sasson runs with Team Shalva at the Jerusalem Marathon, March 2018
(photo credit: SHALVA)
Advertisement
Shalva National Center, Israel's Association for the Care, Inclusion and Support of Persons with Disabilities, broke the record for the number of participants affiliated with the organization in Friday morning's Jerusalem marathon.
Shalva Team Breaks Record in Jerusalem Marathon Communities Race (Ayala PR/YOUTUBE)
1,500 runners from Israel and other countries participated in the Communities Race, including school children from the greater Jerusalem area, soldiers from the elite Duvdevan unit, law enforcement officers, firefighters and Magen David Adom volunteers running for the Shalva team. Celebrities supporting the team included Israel’s top tennis player Shahar Pe’er, Olympic medalist Ori Sasson, Israeli television host Ron Shachar, and Miss Israel Rotem Rabi.The record-breaking number of participants makes Shalva the largest of the marathon's Community teams. In addition to the Israeli support, 550 runners from the USA, Canada, the United Kingdom, Mexico and Australia arrived especially to support the organization's team in order to raise money for the association and enable it to expand its programs and provide greater support.The Shalva team ran special segments of the route which were designated for individuals with special needs, most notably the 800-meter track. Some of the supporters of the team ran the designated segments while others completed the 42.2 kilometer route. 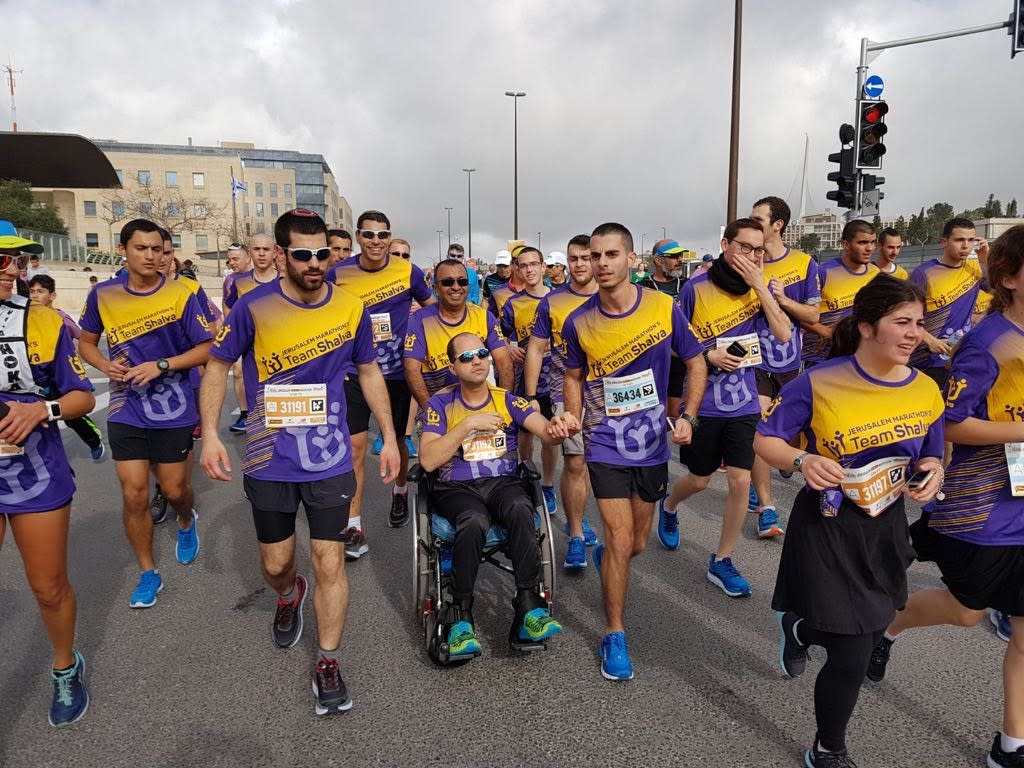 Team Shalva participates in the Jerusalem Marathon, March 2018 (SHALVA)
“The incredible energy felt during the Communities Race was definitely thanks to Shalva’s kids who infected the audience with their natural cheer and joie de vivre. Our kids know that they are an integral part of the Jerusalem Marathon, and at Shalva, we believe that this is a significant social statement, a public declaration that we wholeheartedly embrace people who are different from us into the heart of our national community," Executive Director of Shalva Avi Samuels recounted."I want to thank all the wonderful people out there who were up early this morning, who came to hug our kids, specifically soldiers from the Duvdevan Unit, national security and Hatzalah members, the fabulous kids from Jerusalem elementary schools, Ori Sasson, Shahar Pe’er, Ron Shachar, and Rotem Rabi—whom we all welcome into the Shalva family."