Gunman opens fire on civilians between the West Bank settlements of Alon More and Itamar before fleeing the scene; Hamas praises terror attack. 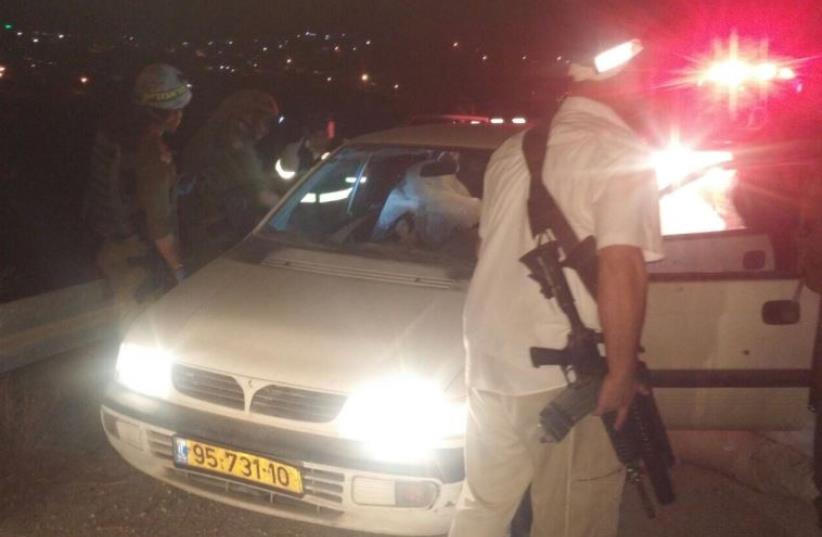 Scene of West Bank drive by shooting that left a couple dead
(photo credit: COURTESY UNITED HATZALAH)
Advertisement
A Palestinian gunman shot dead two Israeli parents in a shooting attack on their vehicle in Samaria, between Elon Moreh and Itamar on Thursday night; Four of their young children survived the attack without injury and were rescued by emergency responders from the bullet-ridden vehicle.Magen David Adom paramedics and IDF units pulled the children out of the car near the Palestinian village of Beit Furik, and paramedics declared the parents dead on the scene after failing to detect vital signs.A 4-month-old baby, a 4-year-old boy, a seven-year-old boy and a nine-year old boy survived the attack without physical injury, after witnessing their parents being shot dead before their eyes.Boaz Malka, a MADA paramedic who arrive on the scene, said, "It was a very difficult scene. We saw a car in the middle of the road, and next to it, a man in his 30s lay on the ground with upper body gunshot wounds. Inside the car a woman sat, with severe upper body wounds. They had no vital signs and to our sorrow we had to declare them dead on the scene."The IDF was sweeping the area for suspects. Reacting to the shooting, Defense Minister Moshe Ya'alon said "this murderous terror attack this evening is a clear continuation of the incitement against the State of Israel and its civilians, and repeated attempts to carry out terror attacks.""The war against terrorism requires determination from us, a steel hand, and patience. We are fighting against a blood-thirsty relentless enemy, and with great sorrow we sometimes absorb losses on the way. At this time, the IDF and the Shin Bet (Israel Security Agency) are pursuing the murderers. We will pursue them and we will not be silent until we place our hands on the murderers, and those who sent them." 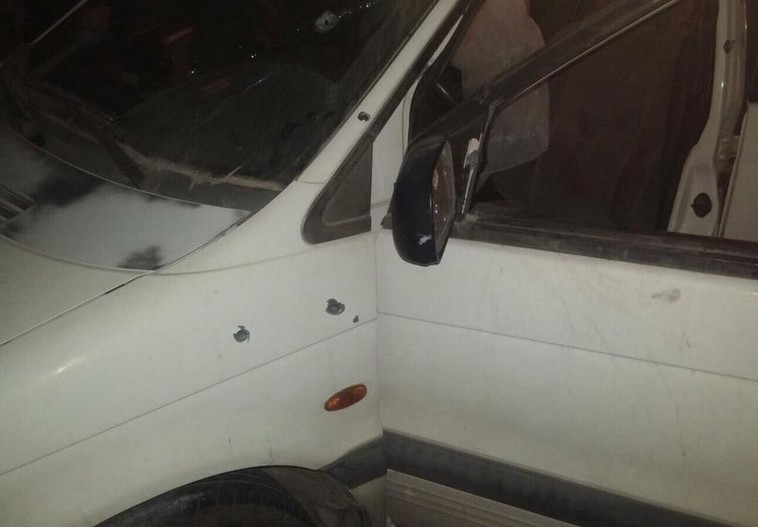 Bullet holes seen in the vehicle from shooting that left Israeli couple dead. Credit: IDF Spokesperson's UnitIn light of the shooting, right-wing politicians accused Palestinian Authority President Mahmoud Abbas's incitement for the attack, which came a day after he threatened to stop abiding by all agreements with Israel in a fiery speech to the United Nations General Assembly.Likud Minister Miri Regev said, "24 hours after the violent speech of the arch-murderer Abu Mazen [Abbas], a husband and wife were killed in Israel."She called on Israel to take harsher steps against Palestinian terror.Education Minister Naftali Bennett (Bayit Yehudi) said that Abbas's "call to arms was taken up tonight in Israel, and it is red with blood."Bennett added that "A people whose leaders encourage murder will never have a state, and this must be made clear. Now the time of talking is done and the time for action has come."Meanwhile, Hamas praised the "heroic terror attack" and called for more "quality attacks."The group said that "Zionists will pay the price for [Prime Minister Benjamin] Netanyahu's criminal policies everywhere."