Tel Aviv City Hall lights up in solidarity with Manchester

Israeli city expresses solidarity with the British city after a suicide bomber killed at least 22 people at a concert. 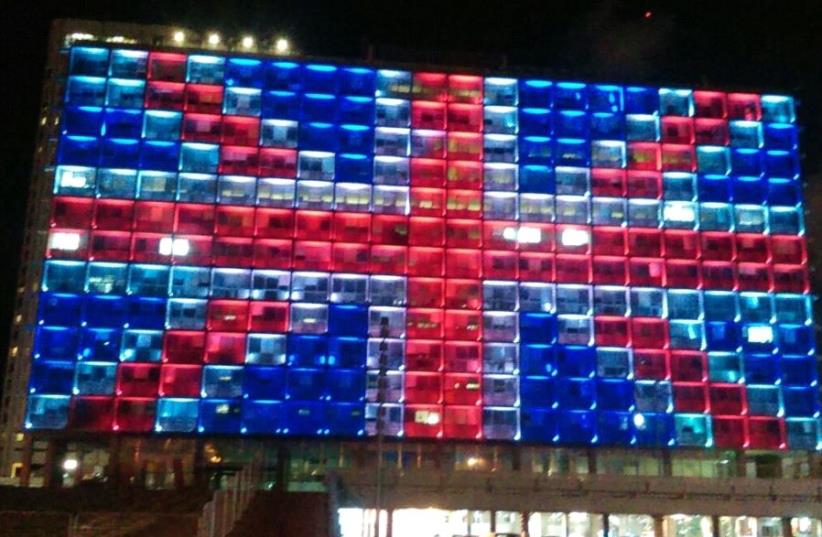 The Tel Aviv Municipality building lights up in solidarity with Manchester after a deadly suicide bombing, May 24, 2017
(photo credit: TWITTER)
Advertisement
The Tel Aviv Municipality illuminated the facade of its building on Tuesday night in the colors of the UK's Union Jack flag in a show of solidarity with the British city of Manchester after a suicide bombing killed 22 people at a concert there.Tel Aviv Mayor Ron Huldai expressed his condolences to the victims of Monday night's attack that occurred at the Manchester Arena at the end of a concert by American pop singer Ariana Grande. "A sad morning here in Tel Aviv as our hearts go out to the people of Manchester. Tonight we will light the Municipality with Union Jack," the mayor said.

The Municipality building lights up tonight as our thoughts and hearts go to the people of #Manchester pic.twitter.com/PevozMaN2O
— Tel Aviv (@TelAviv) May 23, 2017

A sad morning here in @TelAviv as our hearts go out to the people of #Manchester. Tonight we will light the Municipality with Union Jack. pic.twitter.com/RcRXu3kcbk
— Mayor of Tel Aviv (@MayorOfTelAviv) May 23, 2017


Earlier on Tuesday, Prime Minister Benjamin Netanyahu relayed his sympathies to the casualties and their relatives and condemned terrorism. "The Israeli government strongly condemns the terrible terror attack in Manchester," Netanyahu said in a statement."I send condolences to the families of the murdered and wish the wounded a speedy recovery," he continued. "Terrorism is a global threat and enlightened countries must work together to defeat it everywhere."Israeli Ambassador to the United Nations Danny Danon also expressed his condolences and support to his British counterpart Ambassador Matthew Rycroft.“We send our condolences to the families of the victims of the horrific attack in Manchester and pray for a speedy recovery for the wounded,” he said. “Israel stand by your side and we pledge to fight together with you the forces of terror who seek to harm the free world.”British police on Tuesday evening named British-born Salman Abedi, 22, as the perpetrator of the bombing that left scores wounded. The Manchester attack was the deadliest in Britain since July 7, 2005, when four British Muslim suicide bombers killed 52 people in coordinated attacks on London's transport network.On Wednesday, British soldiers were being deployed to key sites in the UK to prevent attacks after the terror threat level was raised to its highest level following the deadly attack.Reuters contributed to this report.