Trump ponders his moves—moving the US embassy, recognition of Jerusalem as Israel's capital—or neither. 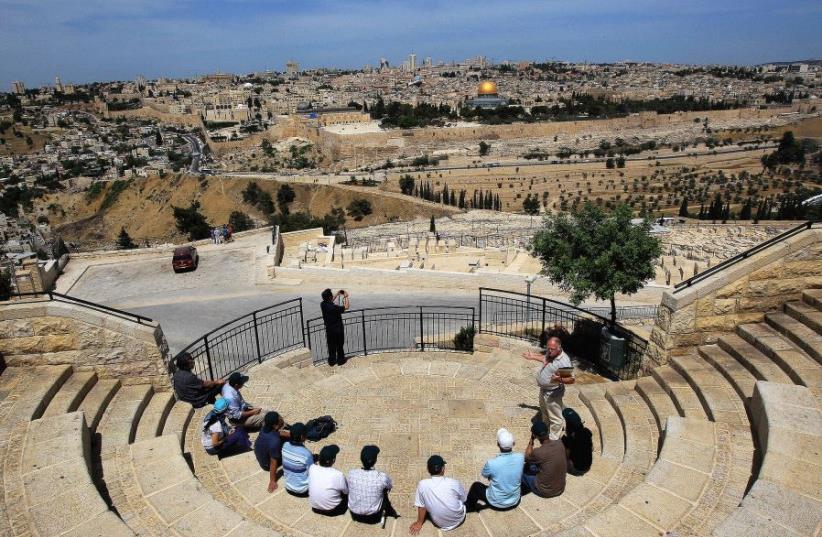 JERUSALEM HAS been the Jewish people’s capital for some 3,000 years. It’s time for the United States to say so.
(photo credit: REUTERS)
Advertisement
United States President Donald Trump will decide Monday whether to sign a waiver to delay relocating the American Embassy from Tel Aviv to Jerusalem. While Candidate Trump pledged to make the move during the 2016 election campaign, reports suggest that he might put off doing so for the moment— to not torpedo his prospective peace plan— and instead this week formally recognize Jerusalem as the capital of Israel.In either eventuality, however, the Palestinian Authority (PA) has threatened to derail any negotiating process with Israel. A PA delegation in Washington, including former chief negotiator Saeb Erekat, reportedly told Jared Kushner— Trump’s point man on the conflict—that any such steps would “kill any potential” for talks and effectively end America's longstanding role as "honest broker." A close associate of PA President Mahmoud Abbas further warned that “the world will pay the price” for any changes to Jerusalem’s status.“Jerusalem does not exclusively belong to Israel," Hanan Ashrawi, a member of the Palestine Legislative Council (PLC), asserted to The Media Line. "This is very provocative, not only to Palestinians but to all Arab nations. There is no international recognition of Jerusalem as part of Israel."She warned that moving the US embassy would threaten the security of the region by fostering violence and extremism. “I hope the American administration is not so irresponsible as to drag the region into severe circumstances," Ashrawi said.
Trump delays moving US embassy to Jerusalem (credit: REUTERS)
Abbas launched a diplomatic campaign over the weekend, calling leaders in Saudi Arabia, Jordan, Qatar, Kuwait, Egypt, Tunisia and France to lobby them to block any prospective change in the status of Jerusalem, the eastern part of which is claimed by Palestinians as the capital of a future state.The Jordanian Embassy in Washington issued a statement likewise warning that "relocating the US embassy at this particular stage will [have] repercussions [among] Palestinians [and] Arab and Islamic [countries] and would jeopardize the two-state solution." The statement stressed that any transfer of the embassy would allow terrorist organizations to spread anger and violence and should thus only happen in the context of a comprehensive peace deal leading to the establishment of a Palestinian state with east Jerusalem as its capital.Saudi Foreign Minister, Adel al-Jubeir also weighed in, saying "the solution to the conflict cannot be envisioned without the establishment of two states living side by side."A 1995 US law calls for the American embassy to be relocated to what Israel considers its undivided capital unless the president deems doing so a threat to national security. Trump’s three predecessors—Bill Clinton, George W. Bush and Barack Obama—all repeatedly postponed the move.Abdallah Abdallah, Chairman of the PLC's Political Committee told The Media Line that relocating the embassy would constitute a major shift in the US' policy since Israel's establishment in 1948. “This act would [break] the international consensus relating to the special status of Jerusalem. Israel has no sovereignty over Jerusalem,” he contended.By contrast, a number of Palestinians privately told The Media Line that they do not object to the initiative so long as it does not prevent the eventual formation of a Palestinian state based on the 1967 borders with east Jerusalem as its capital.But Abdallah stressed that this could only potentially be tolerated by the Palestinian leadership if Washington at the same time recognized east Jerusalem as the Palestinian capital. “They can’t partially solve the issue of Jerusalem,” he added, “as there is no way we would accept that the whole of [the city] is solely for Israel.”Many Palestinians are concerned that an impulsive decision by Trump on such an emotionally charged issue could lead to an impasse in the peace process, which, in turn, could cause the US president to lose interest in achieving “the ultimate deal."After so many decades of on-again off-again negotiations, many Palestinians are wary of American involvement in the long-stalled peace process. This position is influenced by two converging realities; namely, the strength of the US-Israeli strategic relationship and Washington’s past failed attempts to viable solutions for both sides of the conflict.