Breaking with US policy, the ambassador claimed that Israeli settlements make up less than 2% of the West Bank. 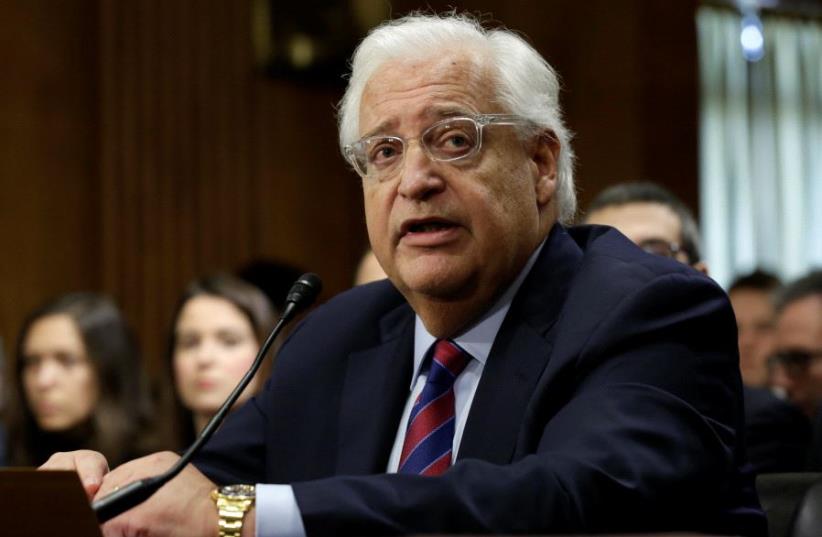 David Friedman testifies before a Senate Foreign Relations Committee hearing on his nomination to be U.S. ambassador to Israel, on Capitol Hill in Washington, US, February 16, 2017.
(photo credit: REUTERS)
Advertisement
US Ambassador to Israel David Friedman recently requested that the State Department cease using the word "occupation" to describe Israel's control of the West Bank, according to a report on Israeli broadcasting channel Kan. The State Department reportedly refused the request. It has not commented on Friedman's remarks, nor has his spokesperson offered a clarification on the ambassador's assertion. But an administration official dismissed the report as “misleading” and “twisted,” and the Trump team has offered no indication that its position on Israel’s presence in the West Bank has changed.“The president is committed to facilitating a comprehensive peace agreement that will benefit both the Israelis and Palestinians and we remain hard at work on those efforts,” the official told The Jerusalem Post.The original report did not attribute its sourcing.

Friedman, breaking with decades of US policy, has said that the settlements in the West Bank are part of Israel, and that the cities, towns and outposts only make up "under 2%" of the territory. In an interview with The Jerusalem Post in September, he referred to Israel's control of the West Bank as an "alleged occupation," sparking ire from the State Department. After his comments, the State Department attempted to do damage control, with spokeswoman Heather Nauert saying that Friedman's stance did not represent a change in US policy. He also added that "nothing in the status quo" regarding settlements was an obstacle for peace with the Palestinians. Towing the same line, US President Donald Trump's envoy for Middle East peace, Jason Greenblatt, has also made similar comments about settlements, declaring that the president does not see them as an obstacle to peace.According to Israeli human rights organization B'tselem, settlements and the jurisdictions they cover make up around 42% of the West Bank. The State Department notes that Area C, which Israel controls in its entirety, is approximately 61% of the West Bank. Earlier this year, Friedman referred to Israel's disengagement from Gaza as a "failed experiment," warning against the country taking out a similar project in the West Bank. On December 6, Trump declared that the United States recognizes Jerusalem as Israel's capital and directed that the American embassy be moved from Tel Aviv to Jerusalem. This week, Friedman met with Jerusalem mayor Nir Barkat to discuss possible sites for the mission. A White House spokesperson told the Post in October that the president believes that "unrestrained settlement activity does not advance the prospect for peace," but that calls for settlement freezes have been similarly unhelpful.